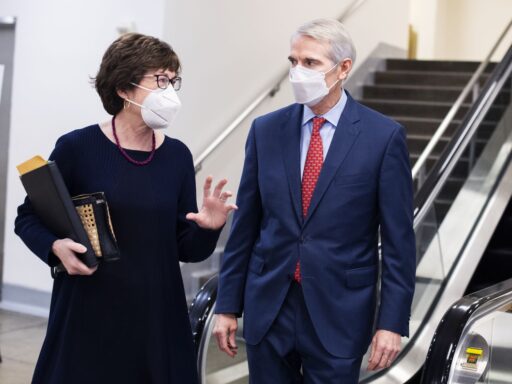 If Democrats agreed to the proposal, they would be able to pass bipartisan relief via the normal voting process.

A group of 10 Republican senators sent a letter to President Joe Biden on Sunday proposing a smaller coronavirus relief package than his $1.9 trillion plan, and asking him to negotiate with them to find compromise on the issue of new Covid-19 stimulus efforts.

The number of signatories is significant, because any bill taken up under normal Senate rules would need at least 10 GOP backers in order to be successful. This renders the letter, in effect, an offer to work with Democrats to pass new stimulus measures — with certain conditions.

In the letter, the Republican lawmakers — a group that includes Sens. Mitt Romney of Utah, Susan Collins of Maine, and Lisa Murkowski of Alaska, as well as other relative moderates — argued their proposal, which they promised to release in full on Monday, would be able to receive bipartisan support, given that it mirrors Biden’s call for $160 billion for coronavirus testing, tracing, treatment, and protective supplies.

The lawmakers also said their bill will include funding for direct payments to “families who need assistance the most,” a reference to some lawmakers’ desire to needs-test direct payments; assistance for small businesses and child care; and $4 billion for mental health and substance use.

They did not provide specifics, but the Washington Post reports the GOP proposal would cut the cost of new stimulus by $1.3 trillion, to around $600 billion, and that it would do so by making major cuts to a number of Democratic priorities.

For instance, Democrats have pushed for another round of direct payments of $1,400 to single people making $75,000 or less per year, and to couples making $150,000 or less. As Sen. Bernie Sanders pointed out on ABC’s This Week Sunday, Democrats promised there would be another round of direct payments of at least $1,400 if they won both Senate seats in January’s Georgia runoff races — and they did.

“You can’t campaign on a series of issues, and then, after the election, when you get power, say, ‘Oh, well, you know what, we’re changing our mind,’” Sanders said.

Accepting the new Republican proposal would force Democrats to do just that, however — it would reduce the direct payments to $1,000 per person, the Post reports.

And those payments would likely be sent out to a much smaller group of people under the new Republican plan. Ohio Sen. Rob Portman, one of the letter’s signatories, said on CNN’s State of the Union Sunday that direct payments should be capped at individuals earning $50,000, or families earning $100,000. “Let’s focus on those who are struggling,” Portman said.

A group of GOP senators, including Sen. Rob Portman, sent a letter to President Biden proposing their own Covid-19 relief package framework and asking to work together.
“We need to be sure this is targeted,” Portman says. https://t.co/iFpCBrgsrH #CNNSOTU pic.twitter.com/4wycNDmQO8

Portman also said that the Democratic proposal to extend federal unemployment insurance — currently valued at $300 per week — through September was premature, and that that program should also be better targeted.

Democrats have proposed not just extending that program, but expanding it, by bumping up weekly payments to $400. The Post reports that the GOP plan envisions keeping the weekly allowance at $300, and extending the program, currently set to expire in March, until June.

The GOP plan also reportedly gets rid of the Democratic proposal to raise the federal minimum wage to $15 per hour, and would likely reduce the amount of aid available to state and local governments.

The GOP signatories argue in their letter — and in television appearances Sunday — that their proposal will give Biden a chance to make good on his promise for “unity,” a theme of his inaugural address.

“In the spirit of bipartisanship and unity, we have developed a COVID-19 relief framework that builds on prior COVID assistance laws, all of which passed with bipartisan support,” the letter reads. “We request the opportunity to meet with you to discuss our proposal in greater detail and how we can work together to meet the needs of the American people during this persistent pandemic.”

And they claim that Democrats’ current plans to push their preferred proposal through Congress through a process known as reconciliation, which allows for legislation related to budgetary matters to be passed in the Senate with a simple majority vote (a majority Democrats now have due to their victories in Georgia), would — in Portman’s words — “poison the well” for any future attempts at bipartisan legislating.

State of the Union host Dana Bash asked Portman why he had supported Republicans using reconciliation to advance controversial legislation in the past, noting it had been used both in the Republican effort to destroy the Affordable Care Act and to pass Trump’s tax cuts into law. Portman replied that “reconciliation is not meant for the purposes that they are trying to use it for,” and argued Democrats should not use reconciliation as their first resort.

Democrats, however, have long been stymied in their efforts to pass a sweeping stimulus package, agreeing to a compromise bill in late 2020 after months of Republican refusals to consider a $3 trillion bill that passed the House in May 2020.

Senate Majority Leader Chuck Schumer has said he is willing “to work with our Republican colleagues to advance” coronavirus relief, but that Democrats are “keeping all our options open, on the table, including budget reconciliation.”

What reception the new GOP proposal will receive from Biden remains to be seen. Appearing on State of the Union on Sunday, the director of the National Economic Council, Brian Deese, told Bash, “We welcome input to say where we may have not gotten everything right,” but argued, “The cost of doing too little right now far outweighs the cost of doing too much.”

Given that many federal coronavirus programs are set to expire in the coming months, there is a need for urgency in work on the next round of stimulus. As Vox’s Emily Stewart has reported, delays in passing the last round meant coverage gaps for many of the unemployed.

Friday, Biden stressed the importance of getting a coronavirus stimulus bill passed, saying, “I support passing Covid relief with support from Republicans if we can get it, but the Covid relief has to pass. There are no if, ands, or buts.”

Given the House’s Democratic majority, and the fact that legislation can pass in that chamber by a simple majority vote, the Senate is where any difficulty in quickly passing aid will arise. There, Democrats have been faced with either finding 10 Republicans to support their proposal, compromising with moderate Republicans on a plan like that advanced by the 10 GOP senators on Sunday, or passing legislation through reconciliation.

For any of these routes to work in the Senate, Democrats would need to be a united front. As it stands, they hold the narrowest possible majority in the evenly-split Senate, with Vice President Kamala Harris serving as a tie-breaker.

And a united front is not a given, because there are some right-leaning Democrats in the Senate who have not fully embraced all the proposals in Biden’s plan, something that ABC’s Martha Raddatz asked Sanders about on Sunday.

Specifically, she asked Sanders about West Virginia’s Joe Manchin, who has said that bipartisan lawmaking is important to him and who has not offered full-throated support of a $15 minimum wage. He has also not said whether he would go along with Democrats if they choose to pursue reconciliation. Sanders expressed faith that “all Democrats understand the need to go forward” with coronavirus relief.

“I believe that we do,” Sen. Bernie Sanders tells @MarthaRaddatz when asked if Democrats have enough votes to pass the COVID-19 relief bill.

Despite “differences and concerns” about the bill, the American people need relief, he adds. https://t.co/0tIupXQlob pic.twitter.com/aGbtmRQ7b1

Sanders added that there would be other opportunities for bipartisanship in the future, especially around issues like prescription drug reform and infrastructure. “But right now, this country faces an unprecedented set of crises,” he said.

One of the GOP letter’s signatories, Louisiana Sen. Bill Cassidy, suggested Sunday that Republicans hadn’t been given enough of a chance to work on a bipartisan agreement.

“If you want unity, you want bipartisanship, you ought to start with the group that’s willing to work together,” Cassidy said on Fox News Sunday.

As Republicans have pointed out, Biden has stated a desire to work with Republicans on legislation. But as Vox’s Ella Nilsen has written, Biden’s ambitions to work across the aisle and to pass his relief package may be at odds with one another — particularly given the more limited scale of relief the 10 GOP senators now propose.

And Democrats seem to believe that if they can only fulfill one of the president’s ambitions, the priority is on getting the package done. As Nilsen writes:

While Republicans in the bipartisan group are the ones advocating for cutting back on Biden’s Covid-19 bill, Democratic senators in the centrist group haven’t been as eager to scale back. Democrats remember that Senate Republicans used the budget reconciliation mechanism to pass their massive tax cut bill in 2017, and some in the Democratic caucus think they should give their priorities the same treatment now that they hold the majority.

Sanders, the Senate Budget Committee chair, and House Budget Committee Chair John Yarmuth have each told reporters their committees are working on drafting budget reconciliation resolutions for the Covid-19 relief bill, which could pass in a matter of days if Schumer and House Speaker Nancy Pelosi give them the green light.

Those reconciliation resolutions are now expected as early as this week. Republicans can also sign onto them if they so desire.

One officer charged, 2 others not indicted in Breonna Taylor’s killing
Voters in DC gave restaurant workers a raise. City lawmakers just voted to block it.
Facing a new coronavirus strain, the UK imposes a strict lockdown
Trump strikes a bitterly vindictive tone during National Prayer Breakfast speech
How Amy Coney Barrett on the Supreme Court could affect LGBTQ rights
Trump loyalists may be purging career officials at the VA