11 questions about sunscreen you should ask before going outside 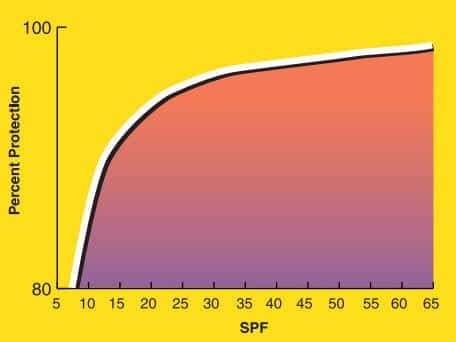 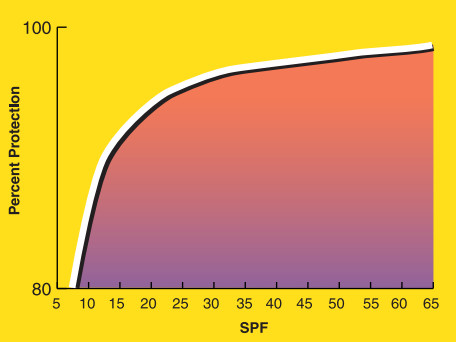 You should be aware that an SPF of 30 is not twice as protective as an SPF of 15; rather, when properly used, an SPF of 15 protects the skin from 93 percent of UVB radiation, and an SPF 30 sunscreen provides 97 percent protection

But most people don’t apply sunscreen properly — failing to reapply often enough or to coat their bodies with a thick, protective layer. So Eleni Linos, an assistant professor of dermatology at UCSF, recommend that any additional protection you can get from a higher SPF may be a good choice. (That may not be a bad idea for another reason: Consumer Reports has repeatedly found that sunscreens fall short of the SPF claims they make on the label.)

SPF only measures how well lotion protects you from UVB rays, so it won’t tell you anything about protection from UVA light.

For this reason, dermatologists suggest looking for the words “broad spectrum” — which means you’re getting both UVA and UVB protection. And as for the SPF level, most dermatologists (and the American Academy of Dermatology) recommend going for at least 30. Consumer Reports does a good job of rounding up quality products from the best brands.

If you’re going to be active, consider water-resistant sunscreen. A recent study in JAMA Dermatology found that many sunscreens fail to meet the American Academy of Dermatology sunscreen guidelines — mainly because the products weren’t water resistant enough. Sunscreen that isn’t water-resistant can wash off with a splash of water, Aleksandar Sekulic, a dermatologist and researcher at the Mayo Clinic, warned. Water-resistant brands should protect you for about 40 minutes in the water. If it’s “very water-resistant,” you’re supposed to get 80 minutes of protection.

2) How many sunburns can lead to skin cancer?

There’s a dose-response relationship here: The more sunburns you have in your life, the higher the risk of skin cancers. “Those blistering sunburns are the ones that are very strongly linked with skin cancer,” Linos added.

And “in childhood, you don’t even want one.” That’s because younger skin is more vulnerable to cancer-causing UV damage.

But how much burning any one individual can handle varies hugely and depends on a mixture of genetic factors (your family history of cancer, your skin color) and environmental factors (how much time you spent in the sun, the severity and number of burns, etc.).

Not everybody’s skin is equally able to withstand UV light. In general, the darker your skin, the less likely to burn and the lower the skin cancer risk. And if you burn in the sun more easily, you are at a higher risk of skin cancer.

“Somebody who comes from Sudan and has dark skin is at a very low risk of skin cancers, even if they get exposed to the sun,” said Sekulic. “Somebody from Iceland who is very fair, or somebody who is a redhead and who cannot tan — these people are at very, very high risk.”

3) How about the environmental effects: Is sunscreen killing off coral reefs?

In the past three years, one-fifth of the coral reefs in the world have died off — and there is a growing awareness that sunscreen is playing a role in this mass extinction.

In May 2018, Hawaii lawmakers passed a bill banning the sale of over-the-counter sunscreens that contain oxybenzone and octinoxate, which are harming the island’s coral reefs. If it’s signed into law, Hawaii would be the first jurisdiction in the US to pass such a measure, NPR reported.

So some sunscreens can certainly be toxic to these underwater ecosystems. But as Brad Plumer reported for Vox, sunscreen certainly isn’t the only threat to them. Instead, increased ocean temperature as a result of global warming is the major reason coral reefs are dying around the world.

According to the Environmental Protection Agency, coral reefs are incredibly vulnerable to human activities; overfishing, coral harvesting, as well as coastal development and boats have also played a role in jeopardizing their health. The chemicals in sunscreen are just some of the many pollutants that are threatening coral reefs.

If it’s “reef-safe” sunscreen your after, you want to look for lotions that are biodegradable. Wirecutter studied the chemicals and tested several options, and determined Thinksport SPF 50+ Sunscreen has ingredients environmental scientists would approve of.

5) What’s the difference between sunscreen and sunblock and which one is better?

The words sunscreen and sunblock are used interchangeably, but sunscreen generally refers to lotion that protects your skin by a “chemical” process, while sunblock creates a “physical” barrier, usually with titanium and zinc particles, to literally block or reflect UV rays.

Compared with sunscreen, sunblock tends to be opaque and leave a white film on the skin.

So which to buy? The dermatologists I talked to said it’s really a matter of preference. Here’s Linos: “Choose something you like, because you’ll want to use it.”

6) What does the evidence say on whether sunscreen use is linked to a decreased risk of skin cancer?

The research is pretty clear that sunscreens can help reduce the risk of at least one type of carcinoma (squamous cell cancer), but less clear on melanoma.

The main issue here is the challenge of actually studying this. Melanoma tends to show up years after damaging sun exposure. It’s also linked to more intermittent sun exposure (e.g., people who live in Northern climates and only get sun on a Southern vacation or during the summer).

Not to mention that these studies are tangled up by all kinds of confounding factors. (For example, people who use sunscreen a lot — pale people — may be at a higher risk of burning and getting skin cancer anyway.) The best evidence researchers have is a long-term study from Australia, which indeed shows that sunscreen has a small effect on melanoma.

”The truth is we don’t have great data from a randomized controlled trial — where they give sunscreen to half a group — that sunscreen use prevents melanoma,” Linos said.

Here’s the bottom line: Though high-quality evidence is a little patchy and hard to come by, sunscreen very probably helps reduce the risk of cancer. As Linos explained: “We do have a lot of suggestive evidence. And we do know sunscreen use prevents sunburn, and we know sunburn is one of the main predictors of all types of skin cancer.”

7) Does sunscreen itself cause cancer?

Probably not. There are epidemiological studies that show that people who use sunscreen seem to get skin cancer at a higher rate. But just because the two findings are linked doesn’t mean one causes the other.

Again, people who burn easily — i.e., fair-skinned folks — tend to use sunscreen more than those who don’t. And fair-skinned people are more likely to get skin cancer than their darker-skinned counterparts.

People who use sunscreen may also have more exposure to the sun’s cancer-causing radiation and therefore a higher chance of getting skin cancer.

Sunscreen may also lull people into a false sense of security. For example, this study of 18- to 24-year-old Europeans found that those who used sunscreen with a higher SPF stayed in the sun for a longer period of time than those who used lower-SPF sunscreen. So cause and effect are difficult to untangle.

And in case you were wondering, sunscreen probably won’t block my absorption of vitamin D from the sun. This randomized trial conducted on Australian adults found no relationship between vitamin D deficiency and sunscreen use over the course of a summer. This review of the literature on UV protection and vitamin D also suggested vitamin D levels didn’t decrease in sunscreen wearers.

8) Sure, sunscreen protects me from the sun, but what about the chemicals in it? Are they safe for my health?

The evidence we do have suggests sunscreen is generally safe, but there’s still a lot we don’t know about the long-term effects of sunscreen use.

There have been some concerns about the toxicity of products that contain titanium dioxide and zinc oxide nanoparticles, though there’s not a lot of clarity here.

Para-aminobenzoic acid (PABA)-based sunscreens and products containing benzophenones can cause skin irritation including rashes and pimples in some people.

Chemicals like octinoxate and oxybenzone have been found to have estrogenic (female hormone-inducing) effects in cell and animal studies, as have some parabens. What this means for humans is still unclear.

Parabens are petroleum-based chemical preservatives found in many cosmetics, including sunscreens. The most common are methylparaben, propylparaben, and butylparaben. According to the FDA, they’re safe for humans in low levels, but there’s some concern about what they can do to the environment.

The dermatologists I spoke to suggested these uncertain risks are a lot less clear than the known risk of sunburn and skin cancer. If you are really worried, consider the barrier protections outlined in question 11. And look out for new products coming on to the market that prevent sunscreen chemicals from seeping into the skin.

9) Does heat damage sunscreen, and when should I throw away an old tube?

Consumer Reports has tested these questions: It found that sunscreens are generally effective several years after purchasing (they’re supposed to last for about three years) but warned that storing them in hot places (on a beach, in a glove compartment) can break down their active ingredients and render them useless.

10) Is it scientifically possible to apply sunscreen to your own back?

It turns out there are myriad applicators you can buy that will help you do just this, and they cost about $10 to $30.

But if you don’t want to splurge, the Huffington Post lists some awesome techniques using various combinations of spatulas, washcloths, plastic wrap, and yoga.

Just remember, there are better and worse ways to apply sunscreen to your body. The American Academy of Dermatology has some good advice on this. It advises that 15 minutes before going outdoors, generously coat all skin that’s not covered by clothing — including face, ears, arms, and lips — with about one ounce of sunscreen, or about enough to fill a shot glass (and more if that’s not doing the trick, depending on your body size). Reapply about every two hours and after swimming or sweating, according to the instructions on the bottle.

Every expert I spoke to emphasized the use of physical ways to prevent sunburn — like wearing a wide-brimmed hat, long-sleeved shirts, and sunglasses and simply avoiding the midday sun whenever possible when harmful UV rays are at their strongest.

”In general these physical methods can often be cheaper, more effective, and many people who are scared of sunscreen chemicals don’t have these concerns about [them],” said Linos. So if you’re judicious about these other methods, you can probably cover about 90 percent of your skin. “Our goal is to prevent sunburn,” Linos said. “There are many great ways to do this.”

Michael Cohen’s letter of resignation from the RNC is weird for many reasons
M. Night Shyamalan’s Old, HBO’s The White Lotus, and the existential terror of right now
A new bill would hold Facebook responsible for Covid-19 vaccine misinformation
Elon Musk’s plan to own investors betting against Tesla is backfiring
Trump effect (local version): Municipal races are packed with candidates
Welcome to the age of billionaire joyrides to space