12 Monkeys, one of TV’s weirdest shows, ends with a delightfully meta series finale 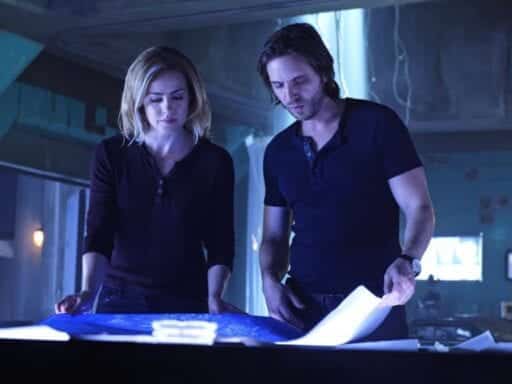 The question every heavily serialized science fiction series must confront in its finale is, “Just how much do we worry about wrapping up the plot?” These shows generate tons of plot and tons of mysteries, and the deeper viewers go, the more compelled they feel to theorize and guess at what might be happening. But at the same time, the show’s writers are often more interested in where the show’s characters end up.

You can tell this is on the mind of 12 Monkeys, Syfy’s rip-roaring four-season series version of the Terry Gilliam time-travel film of the same name, from the earliest frames of its final episode, when actor James Callis turns up to offer a few dire warnings and cryptic prophecies. And, yes, Callis played a major character in 12 Monkeys’s third season and is back as said character. But he might as well have popped in for this finale as his Battlestar Galactica character, Gaius Baltar, to be a sort of “Ghost of Science Fiction Show Finales Past” looming over the proceedings.

But whether series co-creator and showrunner Terry Matalas (who wrote and directed the finale) intended this as a weird meta in-joke or just wanted Callis back for one last go-round, I couldn’t say. What I was most impressed with was how “The Beginning” threads the needle of offering a solid plot conclusion and a lovely character conclusion, with only a few narrative shortcuts along the way.

And how does it do this? It makes the entire episode not about saving time and space, but about the very process of ending a TV show.

There is no good reason that any of 12 Monkeys should make sense. After four seasons of time-travel convolutions, I’m sure that if I put up note cards on my office wall to try to nail down precisely who was where when and how all of the pieces fit together, I could probably find gaps in the timelines and the puzzle pieces. But I would have to go to all of that effort, which is impressive in a subgenre that all but invites paradoxes, plot holes, and mind warping. For as many knots as 12 Monkeys twisted itself in, it generally knew how to find its way out of them, or at least to fake it well enough to slide the trickery past the audience.

It was always the character stuff that this series had a more tenuous grasp on. To be sure, most of the characters are a lot of fun to hang out with (I’m especially fond of eternally exhausted would-be mad scientist Katarina Jones, played by Barbara Sukowa), and the actors playing them were all tapped into the show’s essential ridiculousness, which made the constant convolutions enjoyable. But as with any time travel tale, they inevitably became trapped in the maw of the story, hurled across time and space at breakneck speed until they’re basically just there to keep moving forward.

I don’t know that this is a problem. 12 Monkeys has a surprising amount of thematic depth for a show that sets a climactic battle in its finale to the strains of “Time of My Life” (you know, from Dirty Dancing), in a cheeky homage both to its beloved ’80s pop culture and the idea that everything is coming to an end. It is, on some level, about the idea that time will always end up being something of a god to we creatures trapped in the third dimension. If you start trying to muck about in the guts of Time, it will muck right back.

It’s telling that the solution the show proposes in its finale is to essentially eliminate its own existence. The characters realize the only way to stop those plotting to erase Time itself — yes, this is the villains’ plan on this show — is to completely remove protagonist James Cole (Aaron Stanford) from time, to erase him entirely. Naturally, nobody feels good about this, but they first have to secure a time machine large enough to accomplish the goal, which leads to all of those big battles. Then Cole straps in and erases himself.

It’s a weird combination of a story about killing baby Hitler — is it worth ridding the world of one man if it might save everybody, even if that man is a baby? — and the biblical tale of Abraham and Isaac, of not wanting to sacrifice something dear to you but being commanded to by God. Time will be appeased. Time will, eventually, consume us all. It’s just doing so more directly with Cole.

These pseudo-religious overtones were always why I tuned in to 12 Monkeys, which constantly walked a seemingly impossible line between self-seriousness and utter ridiculousness with a wink and a nod. It borrowed certain plot elements from the film (like a deadly plague that wipes out humanity), but it also quickly moved past them, far more intent on becoming a series about a battle between those who want to kill God and those who want only to trick him into giving them what they want (ending the plague, say, or resurrecting a dead child).

Of course, Time, unlike God, isn’t proposed to be sentient, not even on 12 Monkeys, at least not until its final moments. See, Cole isn’t erased — not completely. It’s suggested that Time almost erased him, but finally decides to spit him out. Why? Because it owes him one, owes him a chance to spend a lifetime with his beloved Cassandra Railly (Amanda Schull). So maybe, just maybe, Time is a TV writer.

Around the midpoint of “The Beginning,” I laughed at its constant insistence that what most gives life meaning is the idea that an ending is coming. The sun is only beautiful because it sets, says Cole. (The sun rises, too, Cole!!!) Ending Time is a ridiculous notion on its face because we linear creatures need to carve out meaning where we can, finding it in the idea that everything has to end. After all: How many myths are there about a god who carries the sun across the sky?

I laughed not because I thought the idea was a bad one. Indeed, I’m mostly sympathetic to it. No, I laughed because it felt a little like Matalas assuring fans of the show that even if they weren’t going to spend another four seasons with these characters, that was good, because giving them an ending gave them meaning on some level. Keep spinning the show in ever greater convolutions and you might never reach a point where it joined together and made any sort of sense.

“The Beginning” does all of the things you’d expect from a series finale. It gives all of the characters appropriate sendoffs, and it even constructs a hazy, sun-drenched epilogue that suggests a happy ending for them. It strains, here and there, for profundity that it doesn’t quite attain, but that’s forgivable in an episode that features a shot of the end of time — depicted as a kind of red storm enveloping everything — consuming the entire planet.

But it also offers its own take on the idea that ending things is harder than beginning them, that drawing all of your story threads to a close can’t quite compete with letting them spin on endlessly. After all, on the best TV shows, often the writers are the biggest fans of the material, and Matalas and his team might feel the temptation to start work on a fifth season of the show tomorrow, despite the unlikelihood that they could keep finding new ways to twist this story forever and ever.

The final shot of 12 Monkeys features Cole and Railly embracing on the front lawn of a house that has come to hold a near-mystic significance to both them and numerous other characters on the series. But then Matalas shifts focus to show a red leaf on a tree overlooking them. It’s either a natural sign of the autumn coming, or a nod toward the idea that Cole’s very existence means Time will always be a little unstable, will always trend toward that red storm.

I could quibble here and there with “The Beginning,” suggest ways the series perhaps doesn’t earn such a ridiculously happy ending, even with that tiny little hint of menace in the final shot. But 12 Monkeys ultimately argues that what’s important is the ending, in and of itself. Meaning can only be achieved by reaching that ending — and a happy ending can only be achieved by erasing the story and all its resultant conflict entirely, as ultimately happens when Cole removes himself (and the prospect of time travel) from the timestream. 12 Monkeys seems to be suggesting that the way it could have achieved the greatest level of meaning was to never have existed at all — and I don’t know what to make of that, beyond saying that I, at least, am glad it existed and I got to watch it.

12 Monkeys is available on Syfy’s website and on Hulu.

How the US stacks up to other countries in confirmed coronavirus cases
Julian Castro’s climate change plan would recognize a new class of refugees
The fatal arrest of George Floyd, a black man kneed in the neck by police, explained
President Trump has tested positive for the coronavirus
Why hurricanes are expected to dump more rain in a warming world
The Democratic voter surge was very real on Super Tuesday