13 federal criminal laws that the pro-Trump mob may have violated, explained 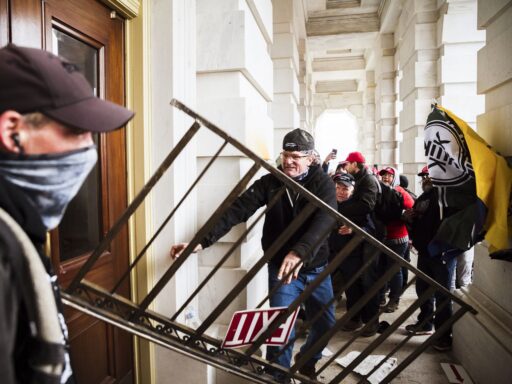 Storming the Capitol in an attempt to overthrow the government is a serious crime.

On Wednesday, a violent mob loyal to outgoing President Donald Trump stormed the US Capitol in an effort to disrupt Congress’s formal certification of President-elect Joe Biden’s victory over Trump.

One might think that an attempt to literally overthrow the duly elected government of the United States would be met with swift and harsh action by law enforcement. But, thus far, most members of this insurrection have escaped unscathed. As of this writing, few people have been arrested — the number may be as low as 13.

But federal law enforcement is hardly powerless against such an attack on democracy.

On Twitter, University of Minnesota law professor Alan Rozenshtein identified numerous federal criminal statutes that members of the pro-Trump mob that briefly occupied the Capitol may have violated. People who participated in the insurrection could have been arrested by the Capitol Police — and they could still be arrested by a federal law enforcement agency if there is sufficient photographic, video, or other evidence that they committed a crime.

Crimes against the United States and its Constitution

Several federal laws punish activity attacking the United States government itself, or that attacks the Constitution.

First, federal law makes it a crime to engage “in any rebellion or insurrection against the authority of the United States or the laws thereof.” Someone who violates this statute faces a fine and up to 10 years in prison.

It’s also worth noting that this law makes it a crime to incite such a rebellion, and violators “shall be incapable of holding any office under the United States.” Thus, to the extent that a government official was complicit in Wednesday’s riot, they could potentially be stripped of their office.

Third, federal law provides that “whoever knowingly or willfully advocates, abets, advises, or teaches the duty, necessity, desirability, or propriety of overthrowing or destroying the government of the United States … by force or violence” may face up to 20 years in prison, and may also be stripped of their ability to be employed by the federal government for up to five years.

Because this statute criminalizes speech, anyone charged under it would likely claim that prosecuting them violates the First Amendment. But the Supreme Court recognizes several exceptions to the First Amendment for things like incitement to imminent criminal acts or so-called “true threats.” So some of the insurrectionists might be convicted under this statute despite constitutional safeguards for free speech.

Finally, another statute makes it a crime to conspire “to injure, oppress, threaten, or intimidate any person … in the free exercise or enjoyment of any right or privilege secured to him by the Constitution or laws of the United States.” Thus, to the extent that members of Congress were exercising a “privilege” secured to them by the Constitution while they were disrupted by rioters, those rioters could potentially face criminal charges.

Violators of this statute face up to 10 years in prison.

Crimes against the peace

Members of the pro-Trump insurrection may have also violated several federal statutes intended to protect the peace.

One such law, for example, makes it a crime to transport a firearm or explosive “knowing or having reason to know or intending that the same will be used unlawfully in furtherance of a civil disorder.” Violations of this statute may be punished by up to five years in prison.

Another law makes it a crime to riot, to incite a riot, or to “aid or abet any person in inciting or participating in or carrying on a riot.” Violators of this statute may also face up to five years in prison.

Additionally, it is a crime to “knowingly possess or cause to be present a firearm or other dangerous weapon in a Federal facility.” Violating this statute is ordinarily punished by up to one year in prison, but if someone brings a weapon into a federal facility “with intent that a firearm or other dangerous weapon be used in the commission of a crime,” they could be imprisoned for up to five years.

Even a relatively minor assault against a federal lawmaker can be punished by a year in prison.

Additionally, the law prohibits a conspiracy to “prevent, by force, intimidation, or threat, any person from accepting or holding any office, trust, or place of confidence under the United States.” As the purpose of the pro-Trump insurrection appears to be to prevent President-elect Biden from holding the office of president, this statute could apply to members of that insurrection.

Violators of this law face up to six years in prison.

Other federal laws make it a crime to damage, rob, or unlawfully occupy federal property.

These statutes could potentially be used against members of the pro-Trump mob who damaged parts of the Capitol. In a widely circulated photo, for example, an apparent member of the mob is seen carrying a lectern from House Speaker Nancy Pelosi’s office. If, in fact, this individual stole that lectern, he could be prosecuted for doing so.

Another statute makes it a crime if someone “enters or remains in any restricted building or grounds without lawful authority.” Such grounds may include any restricted area where a person “protected by the Secret Service is or will be temporarily visiting.” Vice President Mike Pence, who was presiding over the Senate when rioters breached the Capitol, is protected by the Secret Service.

Violators of this statute may face up to 10 years in prison if they carry a firearm or other deadly weapon, or if their crime “results in significant bodily injury.” Otherwise, they face up to one year.

Finally, it is a crime to assault “any person having lawful charge, control, or custody of any … property of the United States, with intent to rob, steal, or purloin such” property. This statute could potentially be applied to insurrectionists who committed assault as part of an effort to rob the Capitol.

Violators of this statute face up to 10 years in prison — or up to 25 years if they put their victim’s “life in jeopardy by the use of a dangerous weapon.”

Why time feels so weird right now
Illinois says you should know if AI is grading your online job interviews
What one of Amazon’s biggest critics thinks the future of the retail industry means for workers
Don’t freak out about the jobs report yet
Democrats need to listen to Neil Gorsuch’s surprisingly good idea
Michael Cohen tweets, then deletes, praise of himself for talking to Mueller