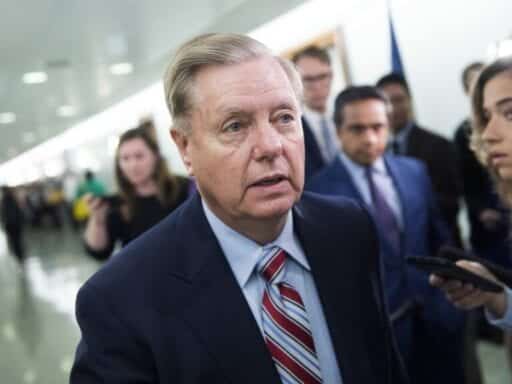 Twenty years after President Bill Clinton’s impeachment trial, a lot has changed politically — including what a handful of still-serving Senate Republicans think about impeaching a president.

In 1999, many Congressional Republicans were eager to condemn Clinton for his abuse of the presidential office. As an inquiry against President Donald Trump gets underway, 14 of them are in the Senate, and several are striking a very different tone. (A few of these Senators were previously in the House during Clinton’s impeachment inquiry.)

“You don’t even have to be convicted of a crime to lose your job in this constitutional republic if this body determines that your conduct as a public official is clearly out of bounds in your role,” Graham said about Clinton, who faced charges of perjury and obstruction of justice. “Impeachment is not about punishment. Impeachment is about cleansing the office. Impeachment is about restoring honor and integrity to the office.”

“Impeachment over this? What a nothing (non-quid pro quo) burger. Democrats have lost their minds when it comes to President Trump,” Graham said in a September statement responding to a summary the White House released of the call between Trump and Zelensky.

House Democrats formally launched an impeachment inquiry just last week, citing Trump’s efforts to pressure Zelensky to dig up dirt on Joe Biden and Biden’s son Hunter. As a whistleblower complaint about Trump’s communications with Zelensky alleges, Trump was “using the power of his office to solicit interference from a foreign country in the 2020 U.S. election.”

Graham is far from the only Republican responding to the House inquiry in this way. Others — like Sens. Mitch McConnell and Chuck Grassley — also advocated strongly in favor of impeaching Clinton by suggesting that he betrayed the trust of the executive office but have widely criticized House Democrats’ efforts to investigate Trump, even though he’s accused of abusing the power of the office as well.

This shift isn’t entirely surprising; after all, the impeachment process now concerns a president of their own party. But the marked change in how Republicans are approaching the allegations against Trump highlights how much senators’ partisan affiliations influence their reactions to wrongdoing by the president and how they’ll likely vote on a conviction if the House sends over charges.

Their positions, it seems, aren’t founded so much on their interpretation of existing evidence as they are on party allegiances. It’s worth noting that a similar dynamic was present in 1999: Democrats overwhelmingly stood by Clinton.

At this point, Senate Republicans are expected to acquit Trump if an impeachment inquiry were to go to a trial. Thus far in his tenure, Republicans have only occasionally broken with the president, both because their priorities have frequently aligned and because of Trump’s immense popularity with the Republican base.

Vulnerable Republican lawmakers who have dared to go up against Trump run the risk of prompting a primary challenge (Thom Tillis, the Republican from North Carolina, experienced this exact phenomenon when he criticized the president’s use of a national emergency declaration to obtain funding for his border wall).

At this point, no Senate Republicans have signaled any openness to impeachment, a sign that the president likely won’t be convicted even if charges are brought by the House, given the upper chamber’s GOP majority.

In 1999, there were some current Senate Republicans who opposed at least one article of impeachment brought against Clinton, including Sens. Susan Collins and Richard Shelby. Collins, in this instance, has suggested that she shouldn’t comment on impeachment because she would serve as a “juror” in a trial on possible Trump charges.

Below is a comparison of comments that Republicans made in 1998 and 1999 in response to Bill Clinton’s impeachment and the reactions they’ve offered thus far on Trump:

Clinton: “This is about a person out of control who took the law, turned it upside down. Every time there was a crossroads, he put his personal and legal interests ahead of the nation. He’s the chief law enforcement officer of the land. He encouraged people to lie for him, he lied, I think he obstructed justice. I think there is a compelling case that he has in fact engaged in conduct that would be better for him to leave office than to stay in office.” (CSPAN)

Trump: “From my point of view, to impeach any president for a phone call like this would be insane. … From a quid pro quo aspect of the phone call, there’s nothing there.” (CNN)

Trump: “I’ve read the summary of the call. If this is the ‘launching point’ for House Democrats’ impeachment process, they’ve already overplayed their hand. It’s clear there is no quid pro quo that the Democrats were desperately praying for.” (Politico)

Clinton: “The President’s actions are having a profound impact on our society. His misdeeds have caused many to mistrust elected officials. Cynicism is swelling among the grass roots. His breach of trust has eroded the public’s faith in the office of the Presidency.” (New York Times)

Trump: “Democrats have been searching for any reason to impeach President Trump since his inauguration because they couldn’t accept the results of the 2016 election.

“This all reeks of hypocrisy considering former Vice President Joe Biden has already said he used his office and taxpayer dollars to pressure Ukraine’s president into taking specific law enforcement actions that directly benefited his son. The attention on unverified reports instead of an on-record admission shows why Americans are so distrustful of politicians and the media.” (Grassley Press Statement)

Clinton: “I believe that in order to convict, we must conclude from the evidence presented to us with no room for doubt that our Constitution will be injured and our democracy suffer should the President remain in office one moment more.

“In this instance, the claims against the President fail to reach this very high standard. Therefore, albeit reluctantly, I will vote to acquit William Jefferson Clinton on both counts.” (CNN)

Trump: “If there are articles of impeachment I would be a juror just as I was in the trial for President Clinton, and as a juror I think it’s inappropriate for me to reach conclusions about evidence or to comment on the proceedings in the House.” (Bloomberg)

The GOP, in general, is sticking very close to Trump

Senate Republicans aren’t the only ones who are sticking steadfastly by Trump. Other prominent Republicans who were involved in the Clinton impeachment, like former House Speaker Newt Gingrich, have also strongly pushed back against calls for impeachment.

When Gingrich lead the inquiry against Clinton in 1998, he lamented the “level of disrespect and decadence that should appall every American.” Gingrich emphasized that impeachment “is not about politics,” adding, “I don’t know — and I don’t care — how this ‘strategy’ polls.”

As the pressure has grown on Trump, Gingrich has taken a different tack, dismissing the idea of impeachment as “absurdity” and “hopeless.” During an appearance on Tucker Carlson Tonight, Gingrich denounced Democrats’ efforts to impeach Trump as “politically very damaging” and an attempt to pander to partisan extremes.

Texas Rep. Kevin Brady, similarly, has taken to Twitter and argued that Democrats are “hellbent on a rush to impeach” in a “#coup” against Trump. During the December 1998 Clinton impeachment debates, meanwhile, Brady supported impeachment because he thought, “truth does matter.” Brady insisted, “If it is no longer the duty of the president to tell the truth under sworn oath, can we require it of any American? The answer is no.”

The overall Republican response to impeachment highlights an about-face along partisan lines and how politicized a process impeachment is. It’s also just the latest example of how much lawmakers are eager to demonstrate their unwavering commitment to Trump.

Tinder may not get you a date. It will get your data.
The 2020 Oscars red carpet, explained by 5 looks
Joe Biden’s 2020 presidential campaign
Harris exposes how Barr reviewed little evidence before his obstruction decision
Watch: Kanye West defends his support of Donald Trump to Jimmy Kimmel
Rick Perry’s spent a lot of time in Ukraine. Now he’s caught up in the impeachment inquiry