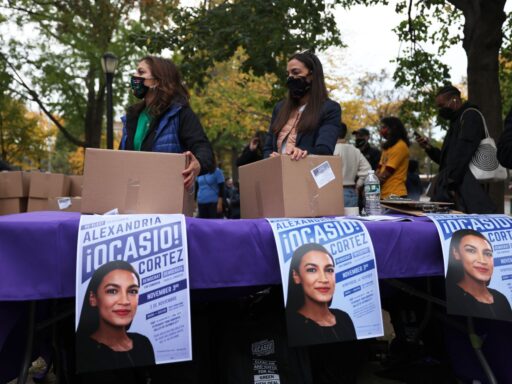 President-elect Joe Biden promised $2,000 stimulus checks if Democrats won the Senate. They did. Now, there are questions on what that $2,000 promise means: Is it $1,400 on top of the $600 already out there from the stimulus package passed in December? Or is it an additional $2,000 on its own?

Biden’s team and Democratic leadership have focused on the more modest version, but there’s a push for sending Americans a full $2,000 more, led by progressive Rep. Alexandria Ocasio-Cortez (NY).

On Thursday, Biden unveiled his opening bid for economic stimulus: a $1.9 trillion proposal meant to bolster the country’s response to the Covid-19 pandemic and boost the US economy. The incoming administration wants to take a two-part approach to the economy — this first “rescue” phase, and a later one focused on “recovery,” the details of which are expected to come when he addresses a joint session of Congress in February (basically, the State of the Union).

Biden’s American Rescue Plan includes stimulus checks — which have been at the center of the economic debate — and calls for giving families an additional $1,400 to bring the December payments to $2,000. Biden’s plan also calls for expanding eligibility for checks to adult dependents who have been left out of previous stimulus rounds and ensure mixed immigration status families are included.

The stimulus checks have gotten a lot of focus in Biden’s proposal in part because they are popular; a poll from Vox and Data for Progress in December, before the $900 billion package was passed, found that 75 percent of likely voters wanted stimulus checks prioritized in legislation. Even outgoing President Donald Trump backed $2,000 checks, and a large majority of his supporters at the very least wanted them to be bigger than $600.

“We will finish the job of getting a total of $2,000 in direct relief to people who need it the most,” Biden said in a speech discussing his proposal on Thursday evening. “$600 is simply not enough if you still have to choose between paying rent and putting food on the table.”

Biden’s proposal is the first step in what is likely to be a long process of negotiations among Democrats and with Republicans, who Biden’s team has signaled they hope will be on board with another round of Covid-19 relief. Fault lines are already beginning to emerge, including when it comes to stimulus checks.

Ocasio-Cortez told the Washington Post that she believes Biden needs to go bigger on stimulus checks. “$2,000 means $2,000. $2,000 does not mean $1,400,” she said. The New York congresswoman reaffirmed the sentiment on Twitter and added that unemployment benefits should be retroactive, too. (Biden’s proposal would extend a $400 a week federal unemployment insurance benefit through September.)

Some Republicans are balking at the size of Biden’s overall plan, but stimulus checks could gain some bipartisan support. Sen. Marco Rubio (R-FL) sent a letter to Biden encouraging him to back standalone legislation to increase checks from $600 to $2,000. Sen. Josh Hawley (R-MO) advocated for $2,000 checks in 2020, and he could throw his weight behind a renewed proposal now.

Even among Democrats, negotiations over what should and shouldn’t be done on the economy aren’t going to be smooth sailing. It’s also not just the left flank Biden and leadership have to contend with — it’s also moderates. Sen. Joe Manchin (D-WV) has been highly skeptical of $2,000 stimulus checks (meaning an extra $1,400, not the larger amount Ocasio-Cortez is asking for). “I don’t know where in the hell $2,000 came from,” Manchin told the Post last week. “I swear to God I don’t. That’s another $400 billion dollars.”

He later clarified that he might support more checks if they were more targeted, though it’s worth noting that they are targeted already: The $600 checks were limited to people who made up to $75,000 a year and phased out at those making $87,000 a year, based on 2019 tax returns. It’s not clear whether Biden would look to expand eligibility on income thresholds or who in exact detail would be eligible to receive checks; his team did not respond to a request for comment.

A spokesperson for Ways and Means Committee Chair Richard Neal (D-MA), who put for the CASH Act the House voted for in December to increase checks to $2,000, said the committee is still working with the incoming administration to finalize details and then will start drafting legislation that mirrors Biden’s proposal.

Biden appears willing to go big. The question is how big.

The initial proposal Biden has put forward is big. For some perspective, after the 2009 Great Recession, Democrats passed a stimulus bill that was about half the size Biden is pushing for now. He says this is the start and that a second proposal that addresses issues such as infrastructure and climate is on the way. And Biden appears to have gotten religion on the deficit, or rather, not worrying about it so much for now, in a moment of crisis.

“It’s not just that smart fiscal investments, including deficit spending, are more urgent than ever. It’s that the return on these investments — in jobs, in racial equity — will prevent long-term economic damage and the benefits will far surpass the costs,” he said on Thursday. “A growing chorus of top economists agree that, in this moment of crisis, with interest rates at historic lows, we cannot afford inaction.”

Still, fracture lines emerging over the stimulus checks and other details of the bill evidence that there is going to be quite a bit of debate among Democrats and on the left about just how ambitious to be. Ocasio-Cortez is hardly the only figure who wants Biden to go further.

Sen. Cory Booker (D-NJ) and Rep. Ayanna Pressley (D-MA) have called on Biden to push to include “baby bonds” in an economic recovery package. “We urge you to ‘go big,’ with a bold vision for racial and economic justice,” they wrote in a letter to the president-elect this week, arguing that baby bonds, which would create federally funded savings accounts for every child in America, “represent a once-in-a-generation opportunity to close the racial wealth gap and unleash economic opportunity for every American.”

Biden’s plan nods at automatic stabilizers, which would attach social safety net mechanisms, such as unemployment insurance, to economic conditions and turn them on and off automatically. It doesn’t get into details on it, but proponents of them are optimistic. In a statement sent by Rep. Don Beyer (D-VA), incoming chair of the Joint Economic Committee, and leaders of the New Democrat Coalition, which has advocated for automatic triggers, the group said that they believe having an ally in the White House “will make an enormous difference as we make the argument for this policy to our colleagues.”

It’s not yet clear how many lawmakers will join Ocasio-Cortez in calling for bigger stimulus checks, but a larger push is possible.

Stimulus checks aside, Rep. Rashida Tlaib (D-MI) and Pramila Jayapal (D-WA) have long been advocating for the Automatic BOOST to Communities (ABC) Act, which would send everyone in the US $2,000 recurring payments during the pandemic on a pre-loaded debit card, followed by $1,000 every month until one year after the coronavirus crisis ends. In a statement to Vox, Tlaib said that it is “good news” that the incoming administration has announced additional relief but that bold action is required to “clean up the neglect of the Trump administration.”

“Families need additional direct payments and we should send them $2,000 checks and not stop there. We need to provide recurring $2,000 checks to everyone. Democrats’ willingness to fulfill the needs of families across the country is what gained us control of the Senate and the White House,” she said. “It’s time for us to follow through on the mandate the people provided us.”

Sen. Bernie Sanders (I-VT), who was a proponent of the $2,000 checks last year and is now about to become head of the Senate Budget Committee, told Politico he plans to be “aggressive” about getting out relief. On Thursday, he called Biden’s proposal a “very strong first installment.”

Democrats have opportunities ahead to make real change in people’s lives. The incoming Biden administration is going to face pressure from the left to do more, and from moderates, perhaps, to do less. It’s how the process works.

Greta Thunberg is leading kids and adults from 150 countries in a massive Friday climate strike
Crazy Rich Asians is a dazzling, sumptuous success
What does it mean to be an ethical biohacker?
“They want to take care of certain little tiny fish”: Trump’s Hannity interview was off the rails
This week in TikTok: How a dance goes viral
The Supreme Court will hear my case today. Trump will not win on DACA.