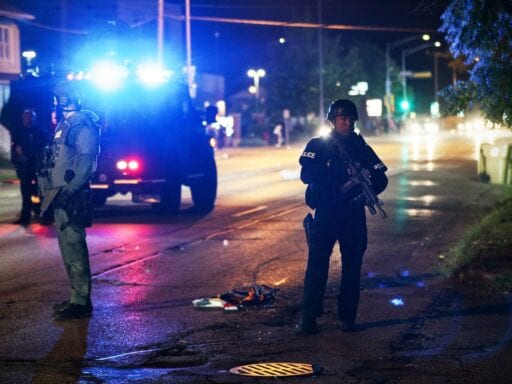 Share
Loading...
Law enforcement stands patrol in the streets of Kenosha, Wisconsin on August 25, 2020 amid protests in response to the shooting of Jacob Blake. | Tayfun Coskun/Anadolu Agency via Getty Images

The self-identified militia member is suspected of fatally shooting two people and injuring a third during a night of protests.

Kyle Rittenhouse, a 17-year-old self-identified militia member, has been arrested and charged with murder, as a suspect in the fatal shooting of at least two people in Kenosha, Wisconsin. Rittenhouse is also suspected of injuring another person at the Tuesday evening protests over the police shooting of 29-year-old Jacob Blake.

Rittenhouse, who has been charged with first-degree intentional homicide, left Wisconsin after the shooting and was arrested in his hometown Antioch, Illinois — a town 30 minutes away from Kenosha.

According to video on social media, Rittenhouse was one of several armed men who said they were guarding a gas station in downtown Kenosha on Tuesday night. (Wisconsin is an open-carry state, but those who carry guns in public must be at least 18.) The gas station became a tense location as the armed men clashed with protesters, according to the New York Times. Video of the incident shows a man, alleged to be Rittenhouse, running down the street with an AR-15-style rifle as he’s pursued by others attempting to apprehend him. Rittenhouse falls to the ground, then proceeds to turn around and begin shooting at the people trying to disarm him.

According to a press release from the Kenosha police, the shots were fired at 11:45 p.m. The gunshot victim who did not die was taken to a hospital with “serious, but non-life threatening injuries.” At a Wednesday afternoon press conference, police officers did not release the names of the victims but said that a 26-year-old Silver Lake resident and 36-year-old Kenosha resident died; a 26-year-old West Allis resident was injured. Police said the investigation, being led by the Kenosha police and FBI, has not yet made a determination on whether both deaths are connected to Rittenhouse.

The shootings took place during the third night of unrest in Kenosha, where Wisconsin Gov. Tony Evers has declared a state of emergency and called in the National Guard to enforce the city’s curfew. On Monday, he called in 125 members; by Tuesday, that number grew to 250. On Wednesday, Evers said that 500 members of the Wisconsin National Guard would be deployed in Kenosha that evening.

Evers responded to the shootings on Wednesday afternoon. “My heart breaks for the families and loved ones of the two individuals who lost their lives and the individual who was injured last night in Kenosha. We as a state are mourning this tragedy,” he wrote on Twitter. “I want to be very clear: we should not tolerate violence against any person. I’m grateful there has already been swift action to arrest one person involved. The individual or individuals whose actions resulted in this tragic loss of life must be held accountable.”

What we know about the shooting suspect

According to the Daily Beast, Rittenhouse is a committed police supporter. His Facebook page, which is no longer publicly accessible, displayed “numerous photos with Blue Lives Matter-style pro-police slogans and imagery, as well as of an Armalite rifle similar to the one he appears to have been photographed carrying in Kenosha.”

In addition, a 2018 post on Rittenhouse’s page shows that he asked his followers to donate to the police advocacy nonprofit organization Humanizing the Badge on his birthday. “I’ve chosen this nonprofit because their mission means a lot to me, and I hope you’ll consider contributing as a way to celebrate with me,” Rittenhouse wrote.

In a press conference on Wednesday afternoon, Kenosha police sheriff David G. Beth said he received a call from someone on Tuesday requesting that the department “deputize citizens who have guns to come out and patrol the city of Kenosha.” Beth said he believes Rittenhouse was part of the group of armed men who wanted the department to deputize them.

Beth also responded to the concern that police officers did not apprehend Rittenhouse when he walked past them. “I’ve been in a shooting before. In situations that are high-stress, you have such incredible tunnel vision. You have no idea what’s outside right here if you’re looking right here,” Beth said holding his hands up to gesture.

At the press conference, a reporter also asked why law enforcement officials were throwing water bottles out of Bearcats to the armed men, encouraging their presence, as seen in a viral video. “Our deputies would toss a water to anybody,” Beth responded. And to a question about whether the militia increased the amount of tension on the streets Tuesday night, Beth said, “To some people it may have been calming. To me it’s not.”

Kenosha Mayor John Antaramian said that he does not want militia to show up. “I don’t need more guns on the street, in the community when we are trying to make sure we keep people safe,” he said. “Law enforcement is trained. They’re the ones who are responsible. They’re the ones we have faith will do their job and make sure it gets done. That is why the curfews are there.”

On Wednesday afternoon, President Trump expressed desire to bring “law and order” to Wisconsin and “not stand for looting, arson, violence, and lawlessness on American streets.” Trump has not spoken publicly about the police shooting of Blake.

Kenosha officials expect another night of unrest after the 7 pm curfew following Rittenhouse’s arrest and as Blake, who is paralyzed, recovers from injuries to his spine and kidneys at a Milwaukee hospital.

Vox Sentences: An impeachment week in the SCIF
Trump’s responses to mass shootings are a giant lie by omission
SNL’s cold open spoofed the Super Bowl preshow — and the game’s awkward ads
Here’s how Facebook plans to make decisions about controversial content it’s taken down
The FDA just gave the green light to a new kit that allows you to swab for coronavirus at home
Bernie Sanders wants to tax companies that pay their CEOs way more than their workers