18 people are dead from Hurricane Michael. That number will only rise. 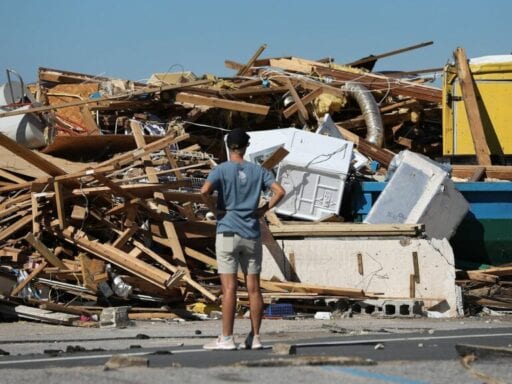 FEMA expects the death toll to rise as rescue teams dig into the debris.

As residents in a half dozen states collect their remnants from the wreckage left behind by Hurricane Michael, relief efforts are still struggling to reach the most heavily damaged areas in Florida’s Panhandle. When they do, our sense of the deadly storm’s toll will only grow.

Michael, which made landfall Wednesday as a Category 4 hurricane, has already taken the lives of at least 18 people, a number that grows every day as search and rescue teams dig into the debris.

Although Florida issued a mandatory evacuation order in many of the coastal cities, some stayed behind to ride out the storm. Hundreds still remain unaccounted for.

“Unfortunately, I think you’re going to see [the death toll] climb,” Brock Long, the Federal Emergency Management Agency administrator, said on Friday afternoon. “We still haven’t gotten into some of the hardest-hit areas.”

Michael ravaged the Florida Panhandle, making landfall at 155 miles per hour — just two miles per hour shy of a Category 5 rating, the most severe on the scale. The “worst storm the Florida Panhandle has seen in more than 100 years,” as Gov. Rick Scott noted Wednesday, later traveled through several other states in the Southeast — including Georgia, the Carolinas and Virginia — leaving a trail of massive destruction in its path.

CNN reports nearly 900,000 people are left without power, of which more than a third are Florida residents, according to power outage data published on Twitter.

There is no one simple explanation for the number and intensity of the hurricanes that have hit the US and its territories in the past 15 months. But, to be clear, scientists agree that global warming is a driving factor in intensifying hurricanes, causing them to carry more rain and cause worse coastal floods. (One possible explanation for how Michael so quickly became a Category 4 is that it was moving through a warmer-than-average Gulf in October.)

This weekend, relief and recovery efforts are trying to make their way to coastal cities in Florida, like Mexico Beach and Panama City, which have been largely isolated by standing water and downed trees and power lines.

“We are working aggressively to get supplies to families in need,” Scott tweeted on Friday. “Food and water commodities are being airdropped into the hardest hit communities, and law enforcement are escorting resources on the road.”

But the storm’s severity is hampering the government and relief groups’ ability to provide the aid they normally would. As Kathy Fulton, the director of a logistics aid network created after Hurricane Katrina, told NPR, “in order to get supplies into a disaster area, you have to have some form of logistics support, whether that’s ground transportation, air transportation, whatever that may be.”

Further complicating the response to Michael is that it comes so closely on the heels of another devastating hurricane in the region, Hurricane Florence last month.

“Organizations do get stretched,” Fulton says, “and there were still things happening from last fall’s events (hurricanes Maria, Irma and Harvey) that all of our organizations have been working on. Without good volunteer support, without the business community stepping up … that work would not get done.”

FEMA is focusing its efforts on “communications, transportation and hazardous materials,” Long said. And CrowdSource Rescue, a Houston-based volunteer search-and-rescue network, has sent out its own teams to look for the approximately 2,100 people who were reported missing or stranded just in the state of Florida, Reuters reports.

In the meantime, locals are concerned about what the future holds for them now that their properties have been completely wiped out from the hurricane. The Internal Revenue Service has promised tax relief for victims of the storm, and several charities have already been set up to aid those in need.

“This is the working-class part of town; We didn’t have much before and now we have even less,” Kevin Deeth, a resident of Panama City, Florida, told the New York Times. “Now we need answers so we can try to start over.”

The government is distributing emergency Covid-19 supplies. But some states are losing out.
The Assistant is a movie about more than Harvey Weinstein. It’s about the system around him.
Microsoft’s astonishing climate change goals, explained
The “free speech debate” isn’t really about free speech
When voting rights weren’t for all women
The new Elena Ferrante novel is a bleak portrait of teen girl self-hatred