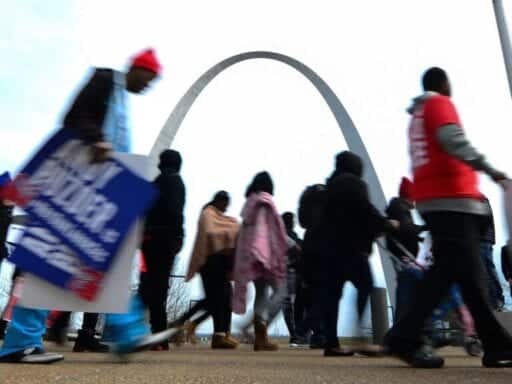 Voters in Arkansas and Missouri will decide whether to raise the state’s minimum wage.

Voters in two conservative states will have the chance to give hundreds of thousands of workers a pay raise in November. Ballot initiatives in Arkansas and Missouri would boost wages for nearly 1 million low-wage workers, whose incomes have hardly budged even as the US economy continues to grow.

In Missouri, the ballot initiative is called Proposition B; it would gradually hike the current minimum wage to $12 per hour by 2023. The current minimum is $7.85. If the measure is approved, the first increase would go into effect next year, with wages rising to $8.60 an hour.

In neighboring Arkansas, voters will face a similar question, called Issue 5. If approved, the minimum wage will rise to $11 by 2021. The minimum wage is currently $8.50.

Polling shows that both measures have wide public support, despite repeated Republican efforts to block any increases to the states’ minimum wage. If voters approve the measures, Arkansas and Missouri will join a growing number of states that are raising the minimum wage at a time when corporate profits are soaring.

It’s also a response to congressional inaction on the issue — lawmakers in Washington, DC, haven’t raised the $7.25 federal minimum wage in nearly 10 years.

“We can’t expect workers to wait for lawmakers to get their shit together,” said Jonathan Schleifer, executive director of the Fairness Project, a nonprofit in DC that helped put the measures on the state ballots.

In January, a total of 18 states raised their minimum wage, six of which will eventually hit $15 an hour. Some of them happened through similar ballot initiatives, others through the regular legislative process. And they aren’t just blue states. For example, Arizona, Colorado, and Maine boosted the minimum wage this year to about $10 an hour, and will reach $12 an hour by 2020.

Republicans and business groups in Arkansas and Missouri have tried to derail efforts to get the minimum wage measures on the ballot, but both have managed to survive.

Here’s what you need to know about the two biggest labor issues on the ballot in November, which would impact the lives of nearly 1 million low-wage workers.

Arkansas has one of the highest poverty rates in the country, and about a quarter of the state’s workers earn the current minimum wage of $8.50 an hour. If voters approve Issue 5 in November, they would get a modest raise, earning $11 an hour by 2021.

Arkansas workers have wanted to raise the minimum wage for years. But despite widespread support for the idea, Republican lawmakers voted down a bill in 2013 that would have raised the minimum wage from $6.25 to $8.25. (Meanwhile, state lawmakers themselves have gotten huge raises.)

The next year, in 2014, labor and religious groups gathered enough signatures to bypass the legislature and put the issue directly to voters. They overwhelmingly voted to give workers a raise. That’s why the current minimum wage is $8.50 an hour.

But as the economy improves and the cost of living increases, workers are struggling to pay their bills. The average worker in Arkansas needs to earn $13.84 an hour to afford a two-bedroom home, according to the National Low Income Housing Coalition.

Republicans control the state legislature and governor’s mansion, and they overwhelmingly oppose the ballot measure. The state’s chamber of commerce tried to knock the measure off the ballot, with the predictable, misleading claim that it would kill jobs. Issue 5 survived a court challenge.

Yet the idea of raising wages is quite popular among voters. A September poll showed about 60 percent support the measure — twice as many as those who oppose it.

Full-time workers in Arkansas who are paid the current minimum wage earn about $17,680 a year, according to a new study by the National Employment Law Project, which supports Issue 5. The study estimates that increase would boost incomes for about 300,000 people in the state — about one in four workers. By 2021, when the full $11 minimum wage is phased in, these workers will be earning about $1,040 more per year.

Raising the minimum wage has even become a divisive issue in the state’s congressional races.

Three of Arkansas’s four members of Congress in the House of Representatives (all four are Republicans and all are facing reelection) have come out against Issue 5, saying it will hurt the local economy. Meanwhile, the four Democrats running against them support the minimum wage increase.

Missouri voters will have the chance to weigh in on Proposition B, which would hike the minimum wage higher than in Arkansas, but over a longer period of time. The minimum wage would reach $12 per hour in 2023.

The current minimum wage in Missouri is $7.85, slightly higher than the federal minimum of $7.25. The last time the state raised the minimum wage was also through a ballot initiative, in 2016, when 75 percent of voters approved it.

But every year since at least 2014, Republican lawmakers in Missouri have voted down proposals to increase the minimum wage. The last time that happened was in January, when two Democratic lawmakers introduced two separate bills: one that would have eventually raised the wage floor to $12 an hour, and another that would have raised it to $15. Neither bill made it to the floor for a vote.

Instead, the Republican-controlled state legislature tried to block local efforts to raise wages. In 2017, the state passed a law barring cities and counties from raising the minimum wage above the state minimum.

The only way to raise wages, then, was to take the issue directly to voters. In May, labor groups collected more than 120,000 signatures to add the question to the November ballot.

The ballot question has also become a central issue in the state’s highly competitive Senate race. Claire McCaskill, the state’s Democratic senator, has said she supports the ballot initiative. Her challenger, Republican Josh Hawley, has said he would vote against it.

“I’m going to vote no on the Missouri measure because I’m worried that it will raise the minimum wage here quickly and out of step with other states,” Hawley said during a debate earlier this month.

That’s not true, as the fact-checkers at the Associated Press later pointed out.

Both ballot initiatives are expected to boost voter turnout in November, which is already expected to be high. And if Missouri and Arkansas voters feel the same way most Americans do, they will probably give workers a raise.

Live results for the June 9 primaries
I will not reopen our church for Trump. I love our congregants too much to risk their lives.
Netflix’s re-translation of Neon Genesis Evangelion is drawing backlash for queer erasure
The US and Canada haven’t budged on NAFTA
How do you cover a presidential campaign during a pandemic?
The UK’s Labour party has a new leader: Keir Starmer