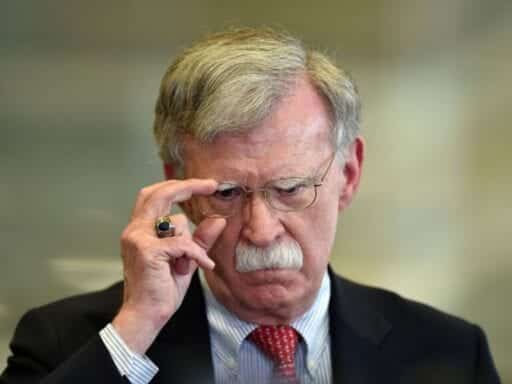 John Bolton, seen here answering journalist’s questions after his meeting with the Belarus president in Minsk in August 2019, signed a $2 million book deal to write about his time in the Trump administration. | SERGEI GAPON/AFP via Getty Images

For all of the claims that people aren’t reading books anymore, political books are selling like Donald Trump merchandise at Mar-a-Lago, dominating nonfiction bestseller lists for the past few years.

Whether they’re pro-Trump (see practically every book written by any Fox News personality) or anti-Trump (reporter Michael Wolff sold 4 million copies worldwide of his insider-y reported book, Fire and Fury), Americans seemingly can’t get enough details about the man who has dominated the news in all formats for more than four years. And they’re rewarding bad-faith publishing efforts as a result.

The book publishing industry has many problems, but the one I find most chilling as a former book editor who now reports in the industry is that people who have vital information about our democracy are rewarded for putting such info in books rather than coming forward.

Former National Security Adviser John Bolton received a $2 million advance from Simon & Schuster to publish a book this March, and based on the information that has already been leaked to the press, it contains damning information on Trump’s dealing with Ukraine that might have been useful to have on the record before Trump’s impeachment trial began in the Senate. The Senate voted to acquit Trump after his impeachment by the House, and although House Judiciary Chairman Jerry Nadler says House Democrats will “likely” subpoena Bolton in the future, lives are being ruined in the meantime. The American people deserve to have this information whether or not the Senate called Bolton to testify in its impeachment hearings (it did not), and they deserve to have it for free, not for the list price of $32.50 at the local bookstore.

Politicians have been writing books for centuries. Nearly all the presidential candidates have written books, and in recent years we’ve seen Hillary Clinton’s postmortem of the 2016 election along with several memoirs by members of the Obama White House. Even Trump is notorious for churning out books that he probably hasn’t read, let alone written.

But a new wave of exiles (or currently working members) of the Trump administration is writing tell-alls. They’re cashing in on their experience in the White House without actually helping the American people, ignoring official methods of reporting such abuses while they’re currently happening.

The alarming trend began in 2017 with the sale of former FBI Director James Comey’s tell-all about his investigations into Trump’s interactions with Russia. A Higher Loyalty was sold to Flatiron Books, a division of Macmillan, for nearly $3 million, and was published even as Robert Mueller’s Russia investigation was in progress, a fact that could have interfered with Comey’s credibility as a witness. That the book was a big bestseller and stoked a thirst for more insider-y political memoirs cannot negate the fact that if Comey was so intent on taking the moral high ground, he could have quit and come forward with his allegations before he was pushed out of the Trump administration. There is duty to one’s country and then there is greed.

Following a 2018 op-ed in the New York Times, an anonymous senior member of the Trump administration “came forward” to warn the American people about Trump’s shortcomings in another tell-all book (as if we didn’t already have more than enough examples of Trump’s corruption). A Warning, published by Twelve Books, an imprint of Hachette, hit the No. 1 spot on the New York Times Nonfiction Bestseller List with a list price of $30.

There has been talk about how the author did not collect royalties or an advance, as if that demonstrates their dedication to the truth instead of money. But imagine if the writer had had the decency to come forward and speak out immediately against a leader whom they accuse of being “unfit for the role of commander-in-chief.” The anonymous writer is someone who is hiding safely behind the scenes even when they could have warned Americans about the country’s erratic leadership a year before the book was published.

John Bolton’s deal for The Room Where It Happened signals new levels of cynicism. Rather than going on the record by reporting Trump’s abuses directly to Congress, Bolton has written about it in a book that was unavailable to prosecutors during Trump’s impeachment trial. To be a whistleblower, it’s not enough to publish a gossipy book: You actually have to blow the damn whistle.

For book lovers such as myself, the silver lining of Trump’s election was the possibility that readers would be looking for escapism and big ideas in art. So it’s particularly demoralizing to watch publishers package the ongoing debasement of our country as entertainment. If Trump’s best political weapon is being at the apex of an infotainment media system that is consumed like cable news, then publishers aren’t obligated to play his game.

It’s nothing less than Trumpian that Trump’s colleagues only speak out against him when money is on the table and not just because they feel morally compelled to do what is right. This kind of greed should not be mistaken for bravery, not while the country and its most vulnerable people continue to be degraded by this administration. And it’s nothing less than dystopian for book publishers to be complicit in allowing for this to happen.

Maris Kreizman is a critic whose work has appeared in the New York Times, Vanity Fair, and New York Magazine. Formerly a book editor, she is now the host of The Maris Review, a literary podcast.