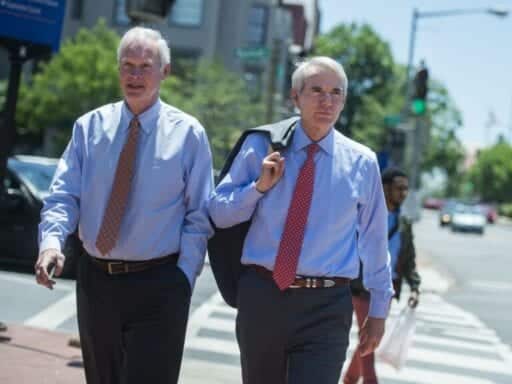 Two senators over the past five days have blown a major hole in one of President Donald Trump’s favorite conspiracy theories about Ukraine. Those two lawmakers are staunch Republicans.

Here’s what Trump believes: Joe Biden improperly used the power of his office as vice president to get a Ukrainian general prosecutor fired, in order to stop him from investigating a Ukrainian gas company that Biden’s son Hunter served on the board of. The reality is that Barack Obama’s administration — as well as many other Western European officials — wanted the prosecutor, a man named Viktor Shokin, removed because he was believed to be trying to stymie anti-corruption efforts in Ukraine.

But you don’t have to take my word for it: Take what Sens. Ron Johnson (R-WI) and Rob Portman (R-OH) have recently said about Shokin’s 2016 departure.

“The whole world felt that this that Shokin wasn’t doing a [good] enough job. So we were saying, ‘Hey, you’ve … got to rid yourself of corruption,” Johnson told the radio program The Vicki McKenna Show on Thursday.

And then on Monday, Portman told Ohio’s Columbus Dispatch the same thing. While the article doesn’t contain quotes to this effect, it describes Portman as “disput[ing] Trump’s characterization of an ousted Ukrainian as an aggressive battler of corruption,” saying he and other lawmakers “believed the prosecutor wasn’t doing nearly enough to root out corruption — not because he was doing too much.”

This isn’t terribly surprising. Johnson and Portman were two of three GOP senators who co-signed a bipartisan 2016 letter to Ukraine’s then-president calling for him to “press ahead with urgent reforms to the Prosecutor General’s office and judiciary.” Four days later, Shokin resigned (although he didn’t officially leave until the following month when Ukraine’s Parliament voted him out).

But in another sense, this is a crucial point. Trump’s belief in this conspiracy theory is seemingly part of what got him into this mess: He noted it in conversation with current Ukrainian President Volodymyr Zelensky in their now infamous July 25 call where Trump pressured his counterpart to investigate Biden’s conduct.

“I heard you had a prosecutor who was very good and he was shut down and that’s really unfair,” the president told Zelensky. “A lot of people are talking about that, the way they shut your very good prosecutor down and you had some very bad people involved.”

What Portman and Johnson have done, though, is confirm Trump’s desire to want Biden investigated isn’t based in reality. Shokin was so bad that Biden, European, and GOP lawmakers wanted him gone.

It’s worth noting that neither senator has said they believe Trump’s desire to have Kyiv probe a 2020 rival is impeachable conduct, so the president isn’t in any more danger of leaving the White House early. Johnson, particularly, has become one of the president’s staunchest defenders in recent days, signing a September 2019 letter asking Attorney General Bill Barr to look into possible Biden-Ukraine corruption and pushing debunked conspiracy theories about the FBI on television this weekend.

But what’s more clear than ever is that the impeachment crisis, of Trump’s own making, was based on a conspiracy theory he had no business believing in.

Why some people don’t tip their Uber drivers
Robert Mueller’s team says it will be very busy in the coming days
Coronavirus is already here. Blocking travelers won’t prevent its spread.
One Good Thing: An amazing game played entirely via text message
Disney says it doesn’t need data to make great shows
Our misinformation problem is about to get much, much worse