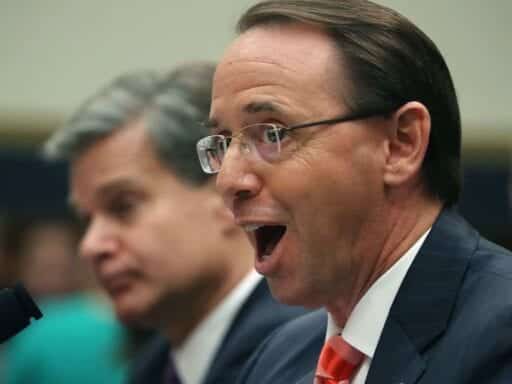 The most conservative members of the House of Representatives have been battling Deputy Attorney General Rod Rosenstein for months. Their latest offensive: a push to investigate Rosenstein for alleged threats to congressional aides.

On Monday, Reps. Mark Meadows (R-NC) and Jim Jordan (R-OH), members of the House Freedom Caucus, wrote to Michael Horowitz, the Justice Department’s inspector general, and requested an investigation into the deputy attorney general. They say they have witness accounts that Rosenstein threatened to subpoena phone and other records of House Intelligence Committee aides during a tense private meeting in January.

However, Rosenstein and the Department of Justice have pushed back forcefully on these claims. Rosenstein denied doing so under oath during a hearing last month. And a Justice Department official told CNN in June that FBI Director Christopher Wray was in the room for the contentious exchange and backs Rosenstein’s account.

The context behind the letter: Meadows and Jordan have been attacking Rosenstein for months over what they claim is foot-dragging on the part of the DOJ in turning over documents related to the Russia investigation. Last month, the House passed a resolution insisting Rosenstein to comply — which was viewed as a potential first step toward possibly holding the deputy attorney general in contempt or initiating impeachment proceedings against him.

It’s not clear if anything will come of this new demand. But this latest move by Trump’s allies in the House fits into what Democrats say is a larger strategy to discredit Rosenstein, who appointed special counsel Robert Mueller and oversees his investigation.

What’s this letter to the inspector general all about?

At issue in this letter is what happened at a January 10, 2018, meeting between top Justice Department officials and House Intelligence Committee officials.

The meeting took place in the midst of a series of demands from House Intelligence Committee chair Devin Nunes (R-CA) for documents about the Trump campaign’s Russia investigation. In attendance were Nunes, some of his aides, Rosenstein, Wray, and other top Justice Department and FBI officials.

Meadows and Jordan — who were not at the meeting — now write that a witness has provided notes to them saying that Rosenstein “threatened to retaliate against” Nunes’s staffers. Their letter states:

According to Witness 1, Mr. Rosenstein “threatened HPSCI staffers and Chairman Nunes.” Specifically, he said he would “‘subpoena’ the Committee’s phone calls and emails.” The specifics of the meeting were further memorialized by Witness 1 in a detailed email after the meeting. Both documents and further detail are available to supplement a sworn statement Witness 1 is willing to provide. Additionally, a second witness has offered to provide documents and a sworn statement.

… This notion that Mr. Rosenstein threatened to to retaliate against rank-and-file staff members for sending written oversight request raises concerns he has abused his authority in the context of the investigation.

This account matches a report from Fox News last month, which quotes from committee staffers’ emails that described the exchange with Rosenstein as a “personal attack.”

However, the Department of Justice has fiercely pushed back on this account, and cited plenty of witnesses — including FBI Director Christopher Wray — who would back the deputy attorney general up.

A Justice Department aide told CNN last month that the comments in question were actually Rosenstein’s response to threats by Nunes’s staffers that they’d try and get him charged with contempt of Congress, for failing to comply with document subpoenas.

“The Deputy Attorney General was making the point — after being threatened with contempt — that as an American citizen charged with the offense of contempt of Congress, he would have the right to defend himself, including requesting production of relevant emails and text messages and calling them as witnesses to demonstrate that their allegations are false,” the Justice Department official said.

“The Deputy Attorney General never threatened anyone in the room with a criminal investigation,” the official continued. “The FBI Director, the senior career ethics adviser for the Department, and the Assistant Attorney General for Legislative Affairs who were all present at this meeting are all quite clear that the characterization of events laid out here is false.”

Rosenstein also publicly denied the allegations at a hearing on Capitol Hill last month, including in a heated back-and-forth with Jordan, who brought up the Fox News report. “Did you threaten to subpoena their calls and emails?” Jordan asked Rosenstein.

The deputy attorney general shot back: “No, sir, and there’s no way to subpoena phone calls.”

But Rosenstein’s and the DOJ’s responses apparently haven’t satisfied some of the House Republicans pressing him from Congress. The letter requests that the inspector general examine the allegations, and report back to Congress and the public on the findings and recommendations.

Meadows and Jordan’s letter is an odd gambit, but the goal seems clear: to target and discredit Rosenstein, the person in charge of Mueller’s probe.

Indeed, Politico reported on Friday that House conservatives were mulling introducing articles of impeachment against Rosenstein, a report that came the same day he announced the indictments of 12 Russian intelligence officers in the Mueller probe.

So far, though, House Speaker Paul Ryan and Rep. Trey Gowdy (R-SC), the chair of the House Oversight Committee, have been unenthusiastic about these efforts. “Impeach him for what?” Gowdy said during a television appearance Sunday. “No.”

Impeachment of Cabinet officials is extremely rare — it’s only happened once in the nation’s history. The reason is obvious: If a Cabinet member’s behavior made impeachment a serious threat, it’s likely that the official would resign or get fired before Congress would act.

But, then again, this latest campaign against Rosenstein speaks to just how strange these times are — members of the president’s own party are waging war against a Trump appointee who also happens to be in charge of an investigation into Trump’s inner circle.

She confronted Jeff Flake over Kavanaugh. Now she’s a guest at the State of the Union.
Here’s the full list of nominees for the 2020 Golden Globes
Why Bob Woodward was booed during his Q&A with reporters Jodi Kantor and Megan Twohey
10 delicious food movies
Canadian Prime Minister Justin Trudeau wore blackface makeup to a party in 2001
Big Tech needs regulation, but DC must go to school before it goes to work