2 winners and 3 losers from night 2 of the RNC 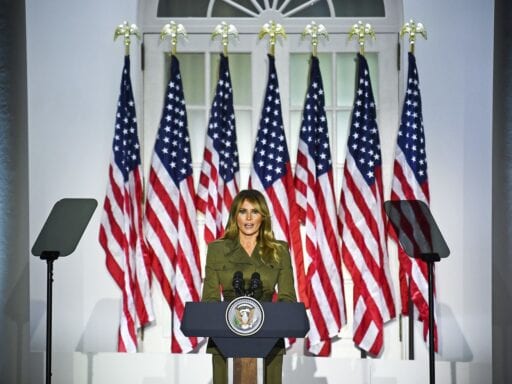 Night two of the Republican National Convention began with an unexpected cancellation — Mary Ann Mendoza, whose son was killed in 2014 in a head-on collision with an unauthorized immigrant, was pulled from the RNC program after tweeting a bizarrely anti-Semitic conspiracy theory.

But much of the rest of the evening was a tribute to swing state voters, and to a version of Donald Trump meant to appeal to independent voters (with some red meat thrown in on abortion and “cancel culture” to keep the base involved).

President Donald Trump has denounced both legal and undocumented immigrants and attempted to restrict asylum seekers from entering the country. But the Donald Trump on display at the Republican National Convention officiated a naturalization ceremony in the White House (to the ire of immigration restrictionists). President Donald Trump champions a very specific version of “law and order,” but the Trump of the Republican National Convention pardoned an ex-offender.

It’s a version of Trump made palatable not for dedicated #KAG (Keep America Great) voters, populists, or immigration restrictionists, but for the middle: swing state voters, suburban independents who voted for Trump in 2016 (or didn’t vote at all) but then voted for Democrats in 2018.

If night one of the convention was meant to play to the base, night two was for the undecided or wavering voter, turned off by four years of Trump but wary of Democrats.

Here’s which people (and concepts) came out ahead, and which didn’t, over the course of the evening.

Trump spent much of tonight’s convention flaunting the powers of the presidency for political gain. He opened the evening by pardoning Jon Ponder, a one-time bank robber who started a nonprofit that provides job training to people leaving jail. Then, in a particularly ghoulish display for a president who built his political brand around harsh immigration policies, Trump hosted a live ceremony where five immigrants were sworn in as United States citizens.

Under Secretary of Homeland Security for Strategy, Policy, and Plans Chad Wolf, who, according to the Government Accountability Office, has been illegally serving as acting homeland security secretary, presided over this ceremony. (Trump announced today that he was nominating Wolf to be DHS secretary.)

Last February, Secretary of State Mike Pompeo approved a State Department memo providing that “Senate-confirmed Presidential appointees may not even attend a political party convention or convention-related event.” And yet, Pompeo did not simply attend the RNC, he was a featured speaker on Tuesday night — violating a longstanding norm against mixing partisan politics with American diplomacy.

And then there was First Lady Melania Trump’s speech — a speech very visibly attended by her husband and by Vice President Mike Pence — which took place in the White House Rose Garden. The Hatch Act of 1939 prohibits federal civilian employees from using their “official authority or influence for the purpose of interfering with or affecting the result of an election,” and it outright forbids some federal workers from participating in political campaigns.

President Trump, who also plans to deliver an RNC speech on the White House grounds, claims that using the White House in a glorified political infomercial is lawful because the Hatch Act “doesn’t pertain to the president.” But, as UC Berkeley law school dean Erwin Chemerinsky writes, “White House staffers will have to be involved in the logistics for setting up and delivering the speech.”

Add it all up and the RNC has so far been a staggering display of this administration’s willingness to break with longstanding norms, and to politicize symbols of American government and power for partisan purposes.

The winners are the five new American citizens who were naturalized Tuesday night.

Trump paraded out five immigrants for a naturalization ceremony at the White House in an apparent attempt to demonstrate his commitment to legal immigration — despite his efforts to dramatically slash the number of immigrants admitted to the US over the course of his first term.

“You followed the rules, you obeyed the laws,” he said. “You learned your history, embraced our values and proved yourselves to be men and women of the highest integrity. It’s not so easy. You went through a lot and we appreciate you being here with us today.”

Trump hasn’t made it easy to immigrate to the US, even for those seeking to do so legally.

Trump’s travel ban, first introduced in 2017 and upheld by the Supreme Court in 2018, now covers citizens of 13 countries. He has built impediments in Central America, at the border, in detention centers, and in the immigration courts that have made obtaining asylum nearly impossible for people fleeing violence in their home countries, who are legally entitled to humanitarian protections.

For would-be migrants trying to obtain visas from abroad, he has imposed a wealth test that is currently facing legal challenges, nearly doubled the cost of naturalization and created the first-ever fee on US asylum applications. He has cut the total number of refugees the US accepts annually to just 18,000, the fewest in history, down from a cap of 110,000 when he took office. And during the pandemic, he has temporarily blocked the entry of foreign workers coming to the US on certain visas, including the sought-after H-1B visa for skilled workers.

Trump is also laying the groundwork to move forward with terminating the Deferred Action for Childhood Arrivals program, which has allowed more than 700,000 young immigrants to live and work in the US without fear of deportation.

In pursuing these policies, Trump has given a platform to immigration restrictionists who have long waited for the opportunity to enact their wishlist, including those at the Center for Immigration Studies and the Federation for American Immigration Reform, groups founded by the white nationalist John Tanton who advocated for maintaining a European-American majority population.

And it’s caused a shift in his own party: even business-minded Republicans who have historically advocated for an expansion of legal immigration have bowed to their party’s anti-immigration wing, offering weak opposition to even the president’s most extreme immigration policies, including the travel ban.

Normally stuck in the shadow of his older brother Donald Jr., Eric Trump stepped up to the podium to emerge as perhaps the most effective orator of the evening. His speech did not break major new ground intellectually, and of course it contained a few whoppers, like the assertion that under his father’s administration “never-ending wars were finally ended” (they are, in fact, still all ongoing).

But broadly speaking, Eric did what relatively few Republicans do: He actually ran down the list of policy areas the Trump administration has tackled, from building more imposing border barriers to assassinating Qassem Soleimani to promoting school choice to moving the US embassy to Jerusalem. The Trump administration really has done a bunch of stuff.

Of course, Eric couldn’t mount a convincing defense of Trump’s shambolic response to the Covid-19 pandemic. But unlike several other of Tuesday night’s speakers, he at least had the dignity to mostly ignore it, rather than speak of it as if it were in the past tense.

And on a tonal level, he struck an excellent balance between Melania’s snooze-inducing keynote later on and his brother’s panicked address Monday evening. In a family characterized first and foremost by a love of being on television, Eric and his beard came across as the most comfortable, most natural, and most persuasive Trump of the week.

Former Florida Attorney General Pam Bondi gave a speech railing against Joe Biden and his nepotistic ways. “At the Democrat [sic] convention, we were told to look at Joe Biden as a model of integrity,” Bondi said. “You look at his 47-year career in politics, the people who benefited are his family members, not the American people.”

Bondi, who herself has shady links to Trump money, was accusing Biden of abusing his powers to favor his family when this was the speaking line-up afterwards:

This was a speech against nepotism. pic.twitter.com/Kgdqwv2mTF

Ivanka Trump and her husband, Jared Kushner, are high-level White House advisers. Eric and Donald Jr. still have Trump Organization business roles and continue to generate enormous sums for the family business with their father in the White House. The degree to which the Trump family has turned the presidency into a money-making machine is truly staggering.

At the Democratic National Convention, Joe Biden’s kids appeared in a short video introducing his speech on the last night. At the RNC, three different Trump children — Donald Jr., Eric, and Tiffany — have given full addresses so far, with Ivanka Trump speaking on Thursday.

It is obviously normal to feature the families of a candidate during the convention. But the attack on Biden’s alleged nepotism — which isn’t a new line of attack from the Republicans — only underscored the hypocrisy of an administration that has treated the presidency like an extension of the family business.

Republicans have spent the first two days of their convention railing against “cancel culture,” but before Tuesday night’s events even began, they had to cancel a longtime Republican activist.

Mary Ann Mendoza, a woman whose son was killed by an intoxicated driver who was an unauthorized immigrant, was originally slated to speak on Tuesday night. But the GOP removed her from the schedule after she promoted an anti-Semitic conspiracy theory involving Queen Elizabeth II, former President Obama, and the wealthy Jewish Rothschild family on Twitter. (Mendoza later disavowed her endorsement of this conspiracy, claiming that she had not read it closely enough.)

Other speakers included Abby Johnson, an anti-abortion activist who accused Planned Parenthood of having “racist roots.” Yet, in a YouTube video posted earlier this year, Johnson claimed that police would be “smart” to racially profile her biracial son because “statistically, my brown son is more likely to commit a violent offense over my white sons.”

Johnson’s also promoted something called “household voting,” where each household would receive only one vote. Johnson also claimed that “Godly” households would give the final power to decide how this vote was cast to the “husband.”

Then they would have to decide on one vote. In a Godly household, the husband would get the final say.

The task of attacking Democratic nominee Joe Biden for the alleged sins of his son Hunter fell to former Florida Attorney General Pam Bondi, an odd choice because Bondi is accused of backing off a fraud lawsuit against President Trump after Trump’s foundation donated to a political action committee formed to support Bondi in 2014.

You can see how vetting can become a challenge, as the party itself is increasingly captured by fringe figures with few qualifications for public office. Donald Trump, after all, is the leader of the Republican Party. And Trump has also promoted supporters of truly bizarre conspiracy theories such as Marjorie Taylor Greene, a Republican congressional candidate and acolyte of the QAnon conspiracy theory — which alleges that a group of Satanic pedophiles secretly operate a “deep state” within the US government.

Speakers like Mendoza and Johnson, in other words, are increasingly normal within the GOP — even though, on this night at least, one of them was too embarrassing for the party to parade in front of a national audience.