2 winners and 3 losers from the LGBTQ presidential forum 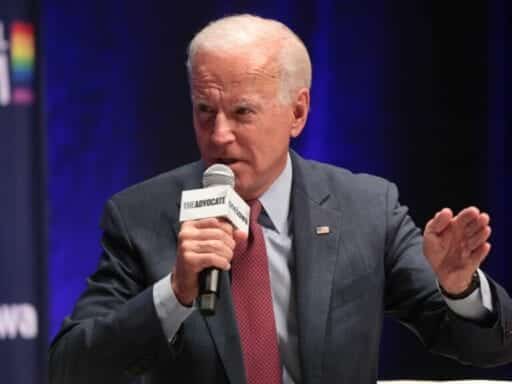 Joe Biden had an uncomfortable showing.

Organized by LGBTQ media advocacy group GLAAD, LGBTQ media outlet the Advocate and the Cedar Rapids Gazette, the forum primarily revolved around how each candidate would respond as president to the current administration’s attacks on LGBTQ rights, including the transgender military ban and plans to rollback health care non-discrimination protections and access to shelters for trans people.

After sharing his coming out story at the last debate, openly gay candidate Pete Buttigieg got a chance to speak about some larger LGBTQ issues for the first time this campaign season. Massachusetts Sen. Elizabeth Warren read off the names of the 18 transgender women of color who have been murdered so far this year in a powerful moment at the beginning of her opening statement. And while many candidates did just fine, others stumbled out of the gate.

It’s become a running joke within the queer community that many politicians still struggle to even say the LGBTQ acronym correctly — and Friday’s forum was no exception. Several candidates fumbled it, or awkwardly spit out “transgender” like Marianne Williamson did in her opening statement; former Vice President Joe Biden seemed to called the acronym at one point LGBYN, which sounded more like OB-GYN than what was intended.

But the evening also produced some quality moments. Here are two winners and three losers from Friday’s forum:

Booker came prepared and it showed. He entered the stage and immediately gave the Advocate editor-in-chief Zach Stafford a bearhug, lifting the journalist off his feet. It could have come across as awkward, but Booker’s easy demeanor and command of LGBTQ policy gave the moment some much needed authenticity. He was also one of the few candidates who didn’t stumble over the LGBTQ acronym.

During a question and answer session with Stafford, Booker spoke clearly about the need for trans-specific protections in his anti-lynching bill and then pivoted seamlessly to the need for police sensitivity training to better deal with everyday interactions with LGBTQ people, especially trans women of color. An astonishing 47% of black trans women will become incarcerated in their lifetimes, and Booker was correct in identifying the issue of police discrimintion against trans people, especially in communities of color.

Additionally, Booker was the only candidate to call for science-based, LGBTQ-inclusive sex education as a much-needed component in the government’s efforts to fight the HIV/AIDS epidemic. Currently, only four states require LGBTQ-inclusive public school sex ed programs.

A long string of important court victories have rolled back anti-sodomy laws and opened the door to marriage equality over the last several decades. LGBTQ people innately understand the importance of the federal court system in maintaining the freedom to exist as a queer person in the United States. So it wasn’t a surprise that the first extended campaign-season discussion of the executive’s role in appointing federal judges came at the first LGBTQ candidate forum.

The courts are an especially pertinent topic given that three cases are set for oral arguments at the Supreme Court next month that will determine the future of LGBTQ employment rights for decades to come.

Unsurprisingly, each candidate pledged to appoint pro-LGBTQ judges and SCOTUS justices to the federal judiciary, but Warren took the discussion one step further, identifying the need for congressional action should the current Supreme Court rule against LGBTQ rights in the upcoming cases. “We always have to remember in this democracy, we’ve relied on our courts to protect the rights of individuals — that’s why they’re there, to protect the minority, to protect the individual,” she said during her question-and-answer segment. “I hope we don’t lose this case, I will stay on top of this, but remember, we also have a Congress that we can hold accountable. And our Congress can decide that we all are equal in this country, and that is the fight I’m ready to lead.”

Several candidates were asked very pointed questions about their past records on LGBTQ issues. The questioning by Gazette columnist Lyz Lenz stuck out in particular. In a headline-grabbing moment, Lenz pressed former Vice President Joe Biden on his past votes in favor of Don’t Ask, Don’t Tell and the Defense of Marriage Act, as well as his recent comments that current Vice President Mike Pence, a longtime anti-LGBTQ politician, was “a decent man.” Biden attempted to explain that this was just the way we are supposed to talk to the other side “when you want to get things done.” To which Lenz then explained that Pence has not been “decent” to LGBTQ people.

It was a refreshing display that is rarely seen in what is usually a very choreographed back-and-forth between modern journalist and presidential candidate. The moment seemed to throw Biden off as well. Lenz tweeted he told her backstage that she was a “sweetheart,” which she told the New York Times she felt was “condescending.”

Lenz later similarly pressed Sen. Kamala Harris on her handling of a case as California Attorney General over trans-affirming health care for a trans inmate. Harris has continuously made excuses over why her office pushed the case, first saying that she was just upholding the current law and then saying that her staffers handled the case without her involvement. Lenz also brought up Warren’s former position against gender-affirming surgeries for trans inmates that she has since reversed. But unlike her exchange with Biden, Lenz’s time with Harris and Warren didn’t end with a defensive remark about the journalist’s character.

While nearly every candidate noted the ongoing epidemic of violence against transgender women of color, none of them were willing to get into the systemic roots of much of the problem: sex work. Many of the trans women who have been murdered were sex workers, and none of candidates were asked how they would reform the current system to make life as a sex worker safer. At one point, someone in the crowd interrupted Sen. Amy Klobuchar’s question-and-answer period in what sounded like a call to “protect sex workers.”

It’s an issue which is begging for attention in this election cycle and has been nearly completely ignored. While sex work advocacy has seen historic progress of late, each of the congresspeople and senators currently running for president voted for FOSTA/SESTA, a bill that was signed into law by President Trump in April 2018 that forced websites to ban content that could be interpreted as promoting sex trafficking. In effect, what actually happened is that sex workers lost their ability to operate online, meaning valuable safety tools like shared dangerous client lists and the ability to pre-screen clients for potential violence indicators were taken away under the law.

In response, sex workers have been forced into the streets to fend for themselves, resulting in a wave of increased violence against them. Additionally, several law enforcement agencies have expressed frustration that they can no longer patrol sex trafficking on previously cooperative online platforms. It’s a political problem of the candidates’ own making, and pointed questions at tonight’s forum could have forced some FOSTA/SESTA supporters to explain their positions. It was a missed opportunity.

Earlier this week, the Washington Post reported that Carson made disparaging remarks about transgender women in a meeting with HUD staff, saying they were “big, hairy men” trying to access women’s homeless shelters. It’s a commonly held stereotype of trans women. The remarks prompted several staffers to protest and one to actually stand up and leave. A spokesperson later tried to clarify that the Secretary was referring to cisgender men pretending to be women to access shelters and not trans women. However, it’s difficult to believe that explanation after the agency recently proposed a rule allowing federally funded women’s shelters to exclude trans women.

LGBTQ youth are at significant risk of becoming homeless, with 40% of all homeless youth identifying as LGBTQ. Additionally, 34% of black trans women face housing insecurity compared to just 9% of non-black trans people.

Carson’s remarks drew near universal condemnation Friday night with several candidates vowing to fire any cabinet members who make such remarks about trans women. Secretary Julian Castro took it one step further by discussing the actual needs of transgender homeless people and the policies he put in place in his time at HUD to protect such a vulnerable population.

Trump sent Arizona a fraction of the ventilators it sought. Republicans still framed it as a big win...
MSNBC will host 2020 Democrats — and one Republican — at the next climate town hall
You can’t turn the economy back on like a light switch
Biden calls for Trump’s Supreme Court nominee to be withdrawn if he wins the election
Vox Sentences: It’s official
Paul Volcker, the most important Fed chair of the 20th century, has died