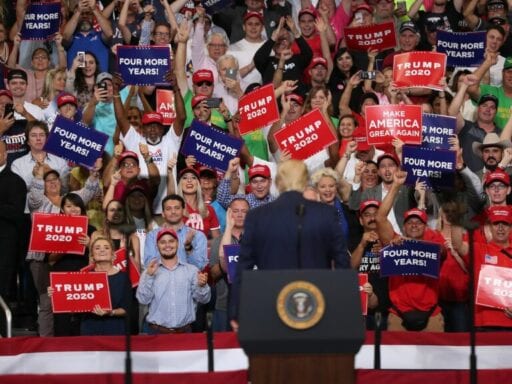 President Donald Trump is, officially, off and running in pursuit of a second term in the White House.

Trump’s campaign kickoff rally in Orlando, Florida, featured a lot of talk about freedom, a lot of talk about Hillary Clinton, and hardline immigration rhetoric. All the classics showed up: Make America Great Again. Keep America Great. Four More Years. The event was held in Trump’s strongest swing state and one of the few competitive 2020 states where he is still barely above water with voters as his campaign gets underway.

It was an angry speech, with Trump lashing out at the “fake news” media, at Robert Mueller and his team of prosecutors, at Democrats whom he portrayed as posing an existential crisis to America as Trump understands it.

He dragged Hillary Clinton back into the center of his 2020 narrative (and gave a bad impression of her to do it, one of the night’s losers). Everything Trump’s done, meanwhile, was a winner — at least in his book: the best, the greatest, with the lowest unemployment and poverty rates. Any sense of perspective, on the other hand, was lost.

Left unsaid, of course, were Trump’s dismal approval ratings, the poor internal polling from his campaign that leaked to the media in the last week, and many of the myriad scandals that have plagued his presidency since his first day as president. Trump pushed back against the negative narratives (especially regarding Robert Mueller’s investigation) and tried to project confidence about his reelection chances.

The crowd really loved it. The president was in his element. He’d regularly depart from the podium for a short walk to soak up their adulation. Trump 2020 was underway.

Here are two winners and four losers from the speech.

It took Trump about 90 seconds to call out the “fake news” media covering his campaign kickoff.

“By the way, that is a lot of fake news back there,” the president said.

At times, Trump sounded like he was running against the media in 2020 as much as any Democrats — and, honestly, he probably thinks about it that way. His first term has been plagued by the scandals revealed in Robert Mueller’s investigation, and in his mind, the media coverage is to blame.

“We went to the greatest witch hunt in political history,” Trump said, “and the only collusion was committed by the Democrats, the fake news media and their operatives and the people who funded the phony dossier: crooked Hillary Clinton and the DNC.”

But he could also turn his framing of the media as “fake news” to his advantage, like when he slammed “career politicians” for manufacturing jobs evaporating in the United States (as opposed to, say, the automation of many production lines.)

“The people trying to stop our movement in Washington who spend their careers rigging the system so your losses will be there will be their game. These are the same career politicians presided over decades of flat wages, loss of our manufacturing jobs, 60,000. Can you believe it? Who would believe that number?”

“You know how I know it is true. if it wasn’t, I’ve been using it a lot. The fake news would have the headlines: Trump used the phony number. They’d have headlines. It would be the biggest story. They never corrected it so I assume that 60,000 shuttered factories be closed up.”

Trump has gotten a lot of mileage out of convincing his supporters that most of the news they read isn’t true, still reveling in the 2016 election forecasts that predicted his loss and turned out to be wrong. The media — and a Democrat who won’t be on the ballot in 2020 but appeared in Trump’s speech more than anybody who is running — seems like Trump’s opponent in the presidential race. Neither will come out unscathed.

It’s not the most important thing, but for as much as Donald Trump has attacked Hillary Clinton over the past four years, you would think he’d have a better impression of her to roll out on stage.

TRUMP: “This election is a verdict on whether we want to live in a country where the people will lose an election, refuse to concede and spend the next two years trying to shred our Constitution and rip your country apart.” pic.twitter.com/cU1zOtqsCB

Anyway, the real takeaway is how much Trump targeted Clinton (and, to a lesser extent, Barack Obama) rather than any of the Democrats actually vying to face him in 2020. Former Vice President Joe Biden got a couple name-checks. And the president attacked “socialism” broadly, with a single reference to “crazy” Sen. Bernie Sanders.

But otherwise, you could have plucked much of this speech out of 2016.

By my count, President Trump has mentioned Hillary Clinton (at least) 7 times tonight in the span of about 30 minutes. Seven!

Clinton paid for the Christopher Steele dossier on Trump, he falsely claimed. She “acid washed” her emails, he alleged. Over and over again, the president attacked his former opponent at the expense of any of the new faces. There was even a brief “lock her up” chant.

The Senate Republican leader wasn’t mentioned by name, but Trump bragged about appointing his 145th judge — a project prioritized by McConnell more than any other single politician. He has kept conservative judicial nominees moving through the Senate even as other legislating has been few and far between.

Trump boasted about the percentage of federal judges on the bench who would be his appointees by the time he finishes his time in office, dinging President Barack Obama for leaving so many slots open for Trump to fill. McConnell, of course, had made it his mission in the last two years of Obama’s presidency to delay the filling of any judicial openings, up to and including the Supreme Court seat for which Obama nominated Merrick Garland.

“By the time we’re finished with the rest we will have record percentages, our percentage will be a record except for one person and one person has a higher percentage than your favorite president, Donald Trump, do you know who that president is?” Trump said, painting his judicial record as historic (and with good reason). “His name is George Washington.”

Loser: Any sense of perspective

It’s easy to become numb to Trump’s hyperbole — it’s what makes the man, really — but look at these claims:

It would be exhausting to try to fact check all of these individual claims. Some of them might even be true, or close to it. But take prescription drugs, for example: Experts say what really happened is that spending on prescription drugs grew at a slower rate in 2018 than previous years. That is not the same thing as reducing drug prices.

But this is emblematic of how Trump also presents himself and how he will continue to do so through the upcoming campaign: everything is the best, worst, or greatest. He’ll just hope voters are so overwhelmed that what sinks in for them is that, with Donald Trump, you will certainly get the most.

In this single clip, Trump promises to cure cancer, AIDS, and “lay the foundation” for a Mars landing — all in his second term pic.twitter.com/aLZqbx2p3N

Trump had some kind words for his attorney general, William Barr. He actually captured a correct and important bit of nuance from the Mueller investigation’s findings: It was not the special counsel’s office that concluded Trump hadn’t committed any crimes, but instead his self-appointed top law enforcement official.

“They appointed 18 very angry Democrats to try to take down our incredible movement. After two years, 1.4 million pages of documents, 500 search warrants, 500 witnesses, 200,800 subpoenas and 40 FBI agents working around the clock and what did they come up with? No collusion,” Trump told the crowd. “The facts that led our great attorney general to determine no obstruction, no collusion.”

He later insinuated that his “great attorney general” might still be looking around for the emails Hillary Clinton deleted a half-decade ago.

The policy achievement Trump can most honestly claim and frankly the one he seems most proud of is repealing the Affordable Care Act’s individual mandate.

“One of the worst things anybody has ever had to live through — we’ve gotten rid of the individual mandate,” Trump said.

The Republican tax plan did repeal the mandate, though that has not been a fatal blow to the Democratic health care law that Trump promised but failed to deliver. Enrollment on the law’s marketplaces has dipped only slightly, insurer participation have been steady, and the premiums for Obamacare plans have flattened. The law isn’t working perfectly, and Trump has tried to undermine it, but it has proven resilient even under a hostile administration.

But a win is a win, and it sounds like Trump will be touting this one a lot as he seeks reelection.

How Fox News is playing fast and loose with American lives, illustrated by one Dr. Oz clip
Private prisons face an uncertain future as states turn their backs on the industry
How Georgia went blue
The unprecedented number of women running for governor in 2018
President Trump is considering pardoning himself. I asked 15 experts if that's legal.
Your questions about the family separation crisis at the border, answered