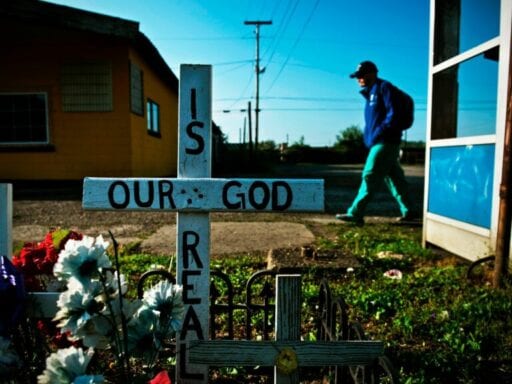 Nearly 200 people a day died of drug overdoses in 2017, based on preliminary federal data.

2016 was the worst year for drug overdose deaths in America — at least, until 2017 came along.

According to preliminary data from the Centers for Disease Control and Prevention, more than 72,000 people in the US are predicted to have died from drug overdoses in 2017 — nearly 200 a day. That’s up from 2016, which was already a record year in which roughly 64,000 people in the US died from overdoses. At least two-thirds of drug overdose deaths in 2016 and 2017 were linked to opioids.

If the estimate holds, it means drug overdoses in 2017 killed more people than guns, car crashes, or HIV/AIDS ever killed in a single year in the US. As with 2016, the 2017 death toll is higher than all US military casualties in the Vietnam and Iraq wars combined.

The 2017 numbers are preliminary estimates, with the final figures expected to come out later this year.

The rise in overdose deaths appears to be linked to fentanyl, a class of synthetic opioids. Over the past several years, fentanyl has supplanted the less potent heroin in illicit drug markets — where it’s misleadingly sold as heroin, laced into heroin to give the drug more kick, or sold on its own for people seeking an even stronger high. But because fentanyl and its analogs are more potent than heroin, the risk of overdose is significantly higher.

The fentanyl problem could get worse. Initially, fentanyls were largely mixed with white powder heroin that’s more widespread east of the Mississippi River. But Margot Sanger-Katz reported for the New York Times that the problem may be expanding: “Dr. [Chris] Jones said there is some early evidence that drug distributors are finding ways to mix fentanyl with black tar heroin, which could increase death rates in the West. If that becomes more widespread, the overdose rates in the West could explode as they have in parts of the East.”

The opioid epidemic began in the 1990s, when pharmaceutical marketing and lobbying led doctors to prescribe far more opioid painkillers — leading to a first wave of overdose deaths as more people, including both patients and people who stole or bought painkillers from patients, misused the drugs and got addicted.

A second wave of drug overdoses took off in the 2000s when heroin flooded the illicit market, as drug dealers took advantage of a new population of opioid users who either lost access to painkillers or simply sought a better, cheaper high. And now the US is in the middle of a third wave, as fentanyls offer an even more potent, cheaper — and deadlier — alternative to heroin.

There are real solutions to the opioid crisis

Public health and drug policy experts say there are solutions to the crisis. First, America could dramatically expand access to addiction treatment — which, based on a 2016 surgeon general report, remains inaccessible to the bulk of people who need it. That would in part entail dramatically boosting access to medications like methadone, buprenorphine, and naltrexone, which are considered the gold standard of treatment for opioid addiction and reduce the mortality rate among opioid addiction patients by half or more.

When France relaxed restrictions on doctors prescribing buprenorphine in response to its own opioid crisis in 1995, the number of people in treatment rose and overdose deaths fell by 79 percent over the following four years.

Beyond treatment, prescribers could also cut back on opioid painkiller prescriptions — to ensure fewer people who misuse the drugs can get them, while still ensuring patients who truly need them get access. Harm reduction approaches, such as needle exchanges and more distribution of the opioid overdose antidote naloxone, would also help.

Several of the states that saw overdose deaths drop or level off in 2017 took these kinds of steps.

Vermont saw its overdose death rate drop by nearly 7 percent last year, with the continued expansion of a hub and spoke system that integrates addiction treatment into the rest of health care. Rhode Island also saw a more than 3 percent drop, as it implemented, among other changes, better access to opioid addiction medications in its prisons and jails. And Massachusetts saw a roughly 1 percent drop, along with a public health campaign that has emphasized more treatment and fewer painkiller prescriptions.

These are by no means huge decreases. But they are significant because they’re in states in New England — which has been among the hardest hit by the opioid crisis, and has seen overdose deaths consistently increase in recent years. Public health interventions can also take time to take root, as more and more of the public learns the risks of addiction and that treatment is really available now.

A consistent problem for many states has been a lack of federal resources. Congress has increased funding for opioid addiction treatment here and there in recent years, but the money allocated so far falls very short of the tens of billions of dollars that experts say is necessary to fully and quickly confront the opioid epidemic. And despite lavish promises, President Donald Trump has done little to change that.

For more on the solutions to the opioid epidemic, read Vox’s explainer.

Venezuelan President Nicolas Maduro survives alleged drone attack in Caracas
After decades of women’s rights gains, why are women less happy?
Apple, Facebook, and Google stocks are falling after surge in coronavirus cases
The government is reopened (for now). But the recovery process may take awhile
From BTS fandom to video games: How 4 new friendships formed during lockdown
Rise of Skywalker’s huge opening weekend was still a big miss by Star Wars standards