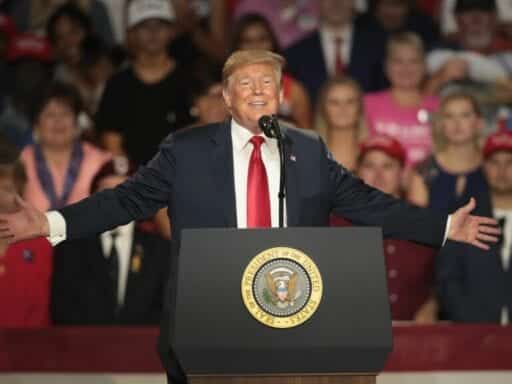 Trump is the leader of the GOP, but House Republican candidates don’t want to speak his name.

President Donald Trump is the leader of the Republican Party, but a new report from the Brookings Institution analyzing Republican candidates in the 2018 midterms indicates that the GOP doesn’t want to talk about him.

On one hand, this makes sense; Trump has had a consistently low approval rating, and the political party in power is usually disadvantaged in the midterm elections. In that regard, it’s easy to see why it would be politically expedient for candidates to distance themselves from both a controversial president and an unpopular Republican-led Congress.

On the other hand, this finding is somewhat at odds with how we have seen the Republican Party behave under Trump.

Since Trump has taken office, elected Republicans have bent backward to defend the president, even in his most indefensible moments. Conservatives have abandoned long-held positions on open immigration, free trade, and small government to stand in lock-step behind a president who has established a xenophobic and isolationist agenda, and paid little attention to the bloated deficit. They’ve found ways to excuse Trump’s praises of dictators his and racist dog-whistles.

And we’ve seen the political downfall of Trump’s biggest critics on Capitol Hill, from Rep. Mark Sanford (R-SC), who lost his primary to a far-right challenger, to Sens. Jeff Flake (AZ) and Bob Corker (TN), who have censured the president most aggressively and both felt pressure to retire.

When Flake announced his retirement, he warned against the Republican Party becoming the party of Trump.

“I’m aware that there’s a segment of my party that believes that anything short of complete and unquestioning loyalty to a president who belongs to my party is unacceptable and suspect,” Flake said then.

But perhaps, as those already in office fight to side with the president, the tide may be changing with Republican candidates on the ground.