2019 was a brutal year for American farmers 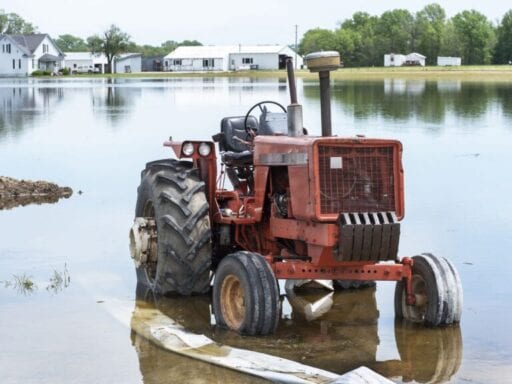 Share
Loading...
Record flooding in many parts of the US this spring pushed back planting for many farmers, threatening their harvests. | Jonathan Rehg/Getty Images

Record flooding, a delayed harvest, and a trade war with China are hammering US agriculture this year.

US farmers have taken a particularly harsh beating this year from a one-two punch of nasty flooding exacerbated by climate change and a trade war with China.

Severe floods spurred by record rainfall soaked the southeast and the Midwest this summer, delaying plantings of corn and soy crops. The National Oceanic and Atmospheric Administration (NOAA) reported that the 12-month period ending in May of this year was the wettest 12 months on record in the United States. (NOAA’s full climate and weather assessment for 2019 will be available in January.) Flooding on the Mississippi River this year also set records for how long it lasted in several locations.

In August, the US Department of Agriculture reported that farmers weren’t able to plant more than 19.4 million acres of cropland in 2019, the most since reporting began in 2007. Most of this area was spread across 12 states in the Midwest and Great Plains.

The late planting pushed back harvests, leaving the crops still standing vulnerable to freezing. Historic autumn rainfall then further drenched the region, leading farmers in states like Minnesota and North Dakota to abandon tens of thousands of acres of crops, including potatoes and sugar beets.

The ongoing trade war with China has also hammered crop sales. Chinese imports of US agriculture products fell by nearly 20 percent, and the Trump administration has responded with close to $28 billion in aid for farmers hurt by foreign tariffs. (The Environmental Working Group found that big, industrial-scale farms, rather than family farms, are getting the majority of those funds.)

The coming months don’t look much better. “Harvest attempts are likely to continue at a slow rate,” the USDA reported in its Midwest outlook earlier this month. “Large numbers of acres of corn (and possibly even some beans) will not get harvested until spring.”

That means farmers who are already facing a cash crunch from tariffs and lower yields will have to wait longer to bring their goods to the market so they can start getting paid.

Crop losses can raise food prices for consumers, but the ongoing trade war has meant farmers are selling less in foreign markets, keeping the domestic supply high. The price of soy in particular is insulated by a record large inventory from the 2018 harvest. “In short, unless exports to China ramp up again, this year’s potential flood-induced production shortfall could have only modest further effects on soybean prices, with perhaps more of an effect on corn prices,” Kevin Kliesen and Kathryn Bokun, researchers at the Federal Reserve Bank of St. Louis, wrote in a blog post.

But in the longer term, farmers are poised to take a bigger hit from reduced production. These losses will ripple throughout the country, not just for farmers, but farmworkers, farming communities, and industries that depend on agricultural commodities. And as average temperatures continue to rise, farmers can expect to see more weather extremes, more damage to crops, and likely, more financial woes.

Agriculture depends on temperature, rainfall, and protection from weather extremes, so scientists have long been concerned about the impacts of climate change on food production. More recently, the 2018 National Climate Assessment reported that many US crops are likely to see declines as growing season temperatures rise, severe droughts strike farming regions, and more destructive disasters like wildfires and storms hit croplands.

Severe weather like extensive flooding is another growing risk for farmers. As average temperatures rise, air can hold on to more moisture. Scientists have already found that the severity and frequency of heavy rainfall events is on the rise.

Even in areas where average temperatures and rainfall are not expected to change much, changes in the climate can lead to weather whiplash, characterized by periods of extreme rainfall followed by extreme heat or dryness. Researchers have found that this could not only damage US agriculture, it could exacerbate environmental problems like fertilizer runoff.

And there are other, more distant factors that influence rainfall patterns in the US. Researchers have found that tropical rainforests play a crucial role in moving moisture throughout the atmosphere. Losing these forests will likely lead to changes in rainfall over farming regions in the United States.

“In response to modelled deforestation of Central Africa, rainfall is reduced over the Gulf of Mexico, and parts of the US Midwest and the US Northwest, while it is enhanced over the Arabian Peninsula,” researchers wrote in a 2014 paper in the journal Nature Climate Change. “These impacts are similar to those resulting from deforestation of the Amazon.”

The Amazon rainforest, the world’s largest tropical forest, suffered an alarming spike in deforestation this year, pushing it closer toward a tipping point where there might not be enough trees to cycle the moisture it needs. That would lead the forest to degrade in a phenomenon known as a dieback, with effects that would ripple throughout the global climate system.

There are hints now that even the Trump administration, which has overly flaunted its inaction on climate change, is starting to take extreme weather threats to agriculture more seriously. Helena Bottemiller Evich at Politico reported that in a June meeting of the US Farmers and Ranchers Alliance, farmers and USDA officials gathered to discuss climate change and ideas like paying farmers to draw carbon dioxide from the atmosphere and store it in their soil.

“Even a year ago, such a meeting would have been improbable, if not impossible,” Evich wrote. “But the long-held resistance to talking about climate change among largely conservative farmers and ranchers and the lobbying behemoths that represent them is starting to shift.”

This is a particularly abrupt shift for the USDA, which was removing references to climate change from its websites at the outset of the Trump administration.

Officials are now taking some steps to soften the blow of domestic agriculture production losses. In November, the USDA deferred interest accrual for crop insurance premiums to help farmers cope with 2019’s weather extremes. It’s also paid out a record $4.24 billion to farmers for the land they couldn’t plant this year.

“USDA is committed to helping farmers and ranchers impacted by the weather challenges this year, and we hope this deferral will help ease cash flow challenges for producers, many of whom are caught in a very delayed harvest,” Bill Northey, USDA’s under secretary for farm production and conservation, told the National Association of Farm Broadcasters.

But farmers need more than piecemeal policies, and the losses stemming from weather extremes worsened by climate change are already starting to mount.

The “abolish the police” movement, explained by 7 scholars and activists
We are not ready to hold an election during a pandemic. Just look at Ohio.
India’s plan to vaccinate 300 million people against the coronavirus, explained
Am I watching Westworld wrong?
National Guard troops are deploying to help with coronavirus. Here’s what they’re doing.
Kanye West’s turn toward spirituality, explained