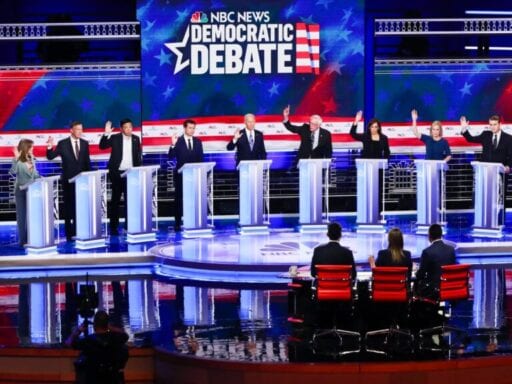 Share
Loading...
The Democratic primary debate, hosted by NBC News, was held at the Adrienne Arsht Center for the Performing Arts in Miami, Florida, on June 27, 2019. | Wilfredo Lee/AP

Sexual violence hasn’t been central to any of the debates so far.

Sexual misconduct hasn’t been a major issue in the Democratic debates so far this year, despite the prominence of the Me Too movement and the ongoing march of allegations against powerful men. Even a new allegation against President Trump, by prominent author and advice columnist E. Jean Carroll, wasn’t enough to jumpstart a major discussion on the topic.

But now the issue is coming to the fore — and not because of the president. Wednesday’s debate will be on MSNBC, whose parent network, NBC, has been accused of mishandling sexual assault allegations against Matt Lauer, and fostering a larger culture of covering up accusations against powerful men.

For weeks, advocates have been calling on the Democratic National Committee to cancel the debate for that reason, without any success. But on Tuesday, several Democratic candidates — Sens. Cory Booker, Kamala Harris, Bernie Sanders, and Elizabeth Warren — signed a letter calling on Comcast, which owns MSNBC and NBC, to launch an investigation.

“We, the undersigned candidates, are very concerned about the message it would send to sexual assault survivors if our next debate is sponsored by MSNBC without clear commitments from Comcast, the parent company of NBC and MSNBC, to conduct an independent investigation into the toxic culture that enabled abusers and silenced survivors,” stated the letter, as reported by HuffPost.

“All Democratic presidential candidates should be pushing NBC to conduct an independent investigation, just as Booker, Harris, Sanders and Warren are calling for in the letter,” Shaunna Thomas, co-founder and executive director of UltraViolet Action, told Vox in a statement.

The letter brings the issue of sexual misconduct back into the presidential race at a time when it has, to some degree, fallen by the wayside. Despite calls from Me Too founder Tarana Burke and other advocates, the problems of sexual harassment and assault haven’t gotten a substantive discussion on the debate stage. And candidates have chosen not to bring up allegations that Joe Biden, one of the frontrunners in the race, behaved inappropriately with women, kissing or touching them in ways that made them uncomfortable.

Taking place in the midst of a public impeachment inquiry, Wednesday’s debate is likely to focus significantly on President Trump’s dealings with Ukraine. But the letter is a reminder of what has been missing from debate discourse altogether. Not only does Trump face sexual misconduct allegations from more than 20 women, but Brett Kavanaugh sits on the Supreme Court, accused men like journalist Mark Halperin are planning or executing comebacks, and even producer Harvey Weinstein — seen by many as the worst of the worst when it comes to men accused of harassment and assault — recently showed up at an event for young actors in New York.

Meanwhile, the systemic problems that enable sexual harassment and assault — from the tipped minimum wage to the country’s gender and racial pay gaps to a culture that values men’s words over women’s — still continue unabated. Democratic candidates have the opportunity to establish themselves as the leaders who can solve them, should they choose to take it.

NBC has been facing increased criticism over its handling of sexual misconduct since the publication last month of Catch and Kill, a book by New Yorker reporter Ronan Farrow that deals with allegations against Lauer as well as Weinstein.

Lauer was fired from his job as the host of NBC’s Today in November 2017, after executives said they received a complaint about “inappropriate sexual behavior in the workplace.” At the time, NBC News chief Andrew Lack said it was “the first complaint about his behavior in the over 20 years he has been at NBC News.” (In a statement this year, Lauer said he was the victim of “false and salacious allegations” and that he “never assaulted anyone or forced anyone to have sex.”)

But in Catch and Kill, Farrow reports that there’s evidence NBC actually knew about allegations against Lauer long before he was fired. He writes that when he worked at the network, executives killed his story on the sexual assault and harassment allegations against Weinstein. One reason, according to Farrow’s reporting, may have been that Weinstein was threatening the network, saying he would reveal what he knew about Lauer if it went ahead with a story on him.

NBC has denied that it was ever threatened by Weinstein, but the criticisms of the network go beyond Weinstein and Lauer. Other NBC executives and onscreen personalities, including Tom Brokaw and Mark Halperin, have been accused of sexual misconduct since Lauer’s firing, as Patrick Ryan notes at USA Today.

“The Matt Lauer story is bigger than one person,” Farrow told the newspaper. “This was a company that was concealing a lot of secrets, and there were allegations against multiple people in senior positions that were covered up.”

Because of criticisms like this, anti-sexual assault and harassment advocates have long been calling for more action by NBC. In October, the women’s group UltraViolet Action staged a rally at NBC headquarters in New York, calling on the network to fire president Noah Oppenheim and release survivors of misconduct at the company from nondisclosure agreements. The same month, the group called on the Democratic National Committee to cancel Wednesday’s debate.

“Donald Trump obviously has been credibly accused of harassment and abuse by literally dozens of women, and it’s our view that Democrats have to offer voters a clear and unquestionable difference,” Thomas told Vox at the time. “They can’t do that if they’re propping up and supporting companies that systemically covered up incidents of violence.”

Since then, NBC has said it will release employees from their nondisclosure agreements if they request such a release from the company. But critics say that requiring employees to ask permission to be released still imposes a burden on those who want to come forward, as Vox’s Alexia Fernández Campbell has reported.

Now, the four candidates, in a letter organized by UltraViolet, are urging the DNC to put pressure Comcast to launch an independent investigation.

“The troubling reports about management’s role to cover up abuse demonstrate that Comcast should have and needs to do more to shift the work culture and pursue significant structural changes in order to prevent future harassment and abuse at NBC and MSNBC,” the letter reads. “It is critical that the Democratic National Committee make clear that they support survivors of sexual harassment and abuse by ensuring that Comcast and NBC News take steps to clean up the toxic culture that exists across their networks.”

In a statement to Vox, Thomas called on all Democratic candidates to push for an investigation at NBC. She also said the DNC should refuse to partner with NBC for future debates without an investigation, and that Comcast should donate the profits from the debate to “organizations committed to ending gender based violence and workplace sexual harassment.”

And, she added, “moderators should ask candidates thoughtful questions that reflect the seriousness of the problem.”

Sexual misconduct hasn’t gotten much attention on the debate stage

The problem of sexual misconduct, and the allegations of organizations looking the other way, go far beyond NBC. Just last week, for example, a former McDonald’s employee sued the fast food chain in a class-action suit alleging a “culture of sexual harassment” at the organization. And while some research suggests that the Me Too movement may have reduced the prevalence of unwanted sexual solicitation at work, experts say that the problem remains severe — especially for women of color and queer people, who can experience intersecting layers of harassment based on their identities, as Kaitlin Sullivan reports at NBC News.

Despite all this, the subject of sexual misconduct has largely taken a back seat to other issues on the debate stage.

The obvious way into a discussion would be President Trump , who has been accused of misconduct by more than 20 women — including author E. Jean Carroll and restaurant owner Summer Zervos, both of whom are suing him for defamation. (He has denied all allegations of sexual misconduct and said the women coming forward are liars.) And yet the Democrats’ criticisms of him have largely focused on other issues, including allegations that he obstructed justice and tried to get Ukrainian officials to investigate the Biden family.

Candidates have also avoided the issue of the allegations of unwelcome behavior by Biden. Lucy Flores, a former candidate for lieutenant governor of Nevada, wrote in an essay at The Cut that in 2014, Biden kissed her on the head and smelled her hair at a campaign event.

“He stopped treating me like a peer the moment he touched me,” Flores wrote. “Even if his behavior wasn’t violent or sexual, it was demeaning and disrespectful.”

After Flores came forward, several other women said that Biden had behaved with them in ways they felt were inappropriate. And Flores believes that Biden’s response to the allegations against him — he has addressed them, but has never offered an apology — should disqualify him as a candidate.

“We don’t have to settle for someone who refuses to acknowledge the wrongs that they have done in the past,” she told Vox in an interview earlier this year. “We’re certainly never going to have a perfect president or perfect elected official,” she added, but “I want someone who is willing to acknowledge when they have made mistakes.”

But Biden’s opponents have generally not emphasized those allegations. Even Sen. Kirsten Gillibrand, considered a leader in fighting sexual assault and harassment, chose another tack when she challenged Biden directly on his past in a July debate — she focused on a 1981 op-ed in which Biden appeared to disparage parents who use daycare for their children.

Other Democratic candidates may feel that Biden’s history with women isn’t a winning issue with voters. But polling shows voters do care about sexual misconduct as a broader issue. A majority of Americans consistently support the Me Too movement — 52 percent, according to a September PerryUndem poll. The same poll found that many Americans want the government to take action on sexual misconduct allegations, with 60 percent of voters saying they support an investigation into the accusations against Kavanaugh.

Meanwhile, according to PerryUndem researchers, the Kavanaugh confirmation hearings, the Me Too movement, and the election of President Trump have made more Democrats and independents think about the power and control that white men have in America — and, in many, created a drive for change.

On Wednesday, Democrats will have the opportunity to address not just the sexual misconduct allegations at NBC, but the ongoing concerns many Americans have about how high-profile people abuse their status to harm those less powerful than them.

The eerie emptiness of cities responding to coronavirus, in photos
Donald Trump is the accelerant
How Silicon Valley workers are revolting against Trump’s immigration policy
Essential pandemic workers still don’t have enough masks and gloves
Bernie Sanders’s immigration plan puts the rights of immigrant workers into focus
6 months of Trump’s excuses for not doing an interview with Mueller: a timeline