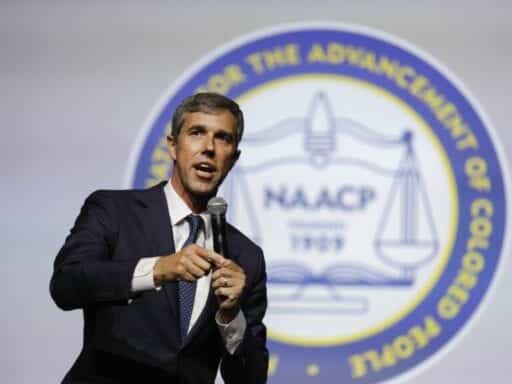 At the 110th gathering of the country’s oldest and largest civil rights organization, politicians continued to make their pitch to black voters.

Wednesday marks the end of the NAACP’s annual convention, a gathering of more than 10,000 members of the nation’s largest and oldest civil rights organization. This year, the group focused heavily on two things: calling attention to the needs of black voters in 2020 and opposing the Trump presidency.

The organization’s 110th gathering, held in Detroit for the first time since 2007, was attended by a mix of politicians, presidential candidates, civil rights figures, and activists. The group’s leadership said that it wanted to focus on a key message more than 15 months before the presidential election: that it is committed to fighting racism and amplifying the voices of black voters, particularly when it comes to voting President Donald Trump out of office.

“This year, once and for all, we hope to have a real conversation about racism in the United States of America,” NAACP Chair Leon Russell told reporters earlier in the conference. “We want to talk about what part public policy plays in racism in the United States and we want to talk about what role the NAACP … plays in trying once and for all to eliminating racism.”

The convention took place as presidential candidates work to convince black voters that they deserve their support. Polling of black Americans from groups like BlackPAC, the Black Futures Lab, and the Black Economic Alliance has found that black communities are worried about racism, health care, education, policing, and the economy and are strongly against President Trump.

With these concerns in mind, several conference speakers called attention to the importance of using policy to further black progress, highlighting the need to address issues like police accountability, voting rights, economic access inequality, and emboldened white supremacy. Others focused squarely on the actions and rhetoric of the president, calling out Trump’s long history of racism, including his recent tweets and statements calling for four congresswomen of color to “go back” to other countries.

And on July 23, NAACP delegates unanimously voted for Trump to be impeached, supporting a congressional resolution sponsored by Texas Rep. Al Green, a member of the Congressional Black Caucus. In a statement after the vote, current NAACP President Derrick Johnson, said that Trump “has led one of the most racist and xenophobic” presidential administrations and pledged that the NAACP will be “at the forefront of pushing Congress to proceed with the impeachment process.”

Today, @NAACP voted to move forward with a resolution to initiate @realDonaldTrump’s impeachment at the 110th #NAACPConvention. Trump’s misconduct is unmistakable and has proven time and time again, that he is unfit to serve as the president of this country. #WhenWeFightWeWin pic.twitter.com/LFg7Z8JDYO

President Donald Trump was also invited to participate, but announced that he would not attend the convention, citing a scheduling conflict. Organizers said the issue was in part that the president did not want to participate in a candidate forum, instead preferring to give his own speech. But Trump has repeatedly declined as president to speak at NAACP conventions in the past.

Candidates discussed a number of issues, including voting rights, criminal justice, policing, and reparations. With the forum unfolding as former special counsel Robert Mueller testified to members of Congress about the investigation into the Trump administration’s alleged collusion with Russia before the 2016 election, several candidates were also asked to weigh in on that and whether they believe the president should be impeached.

Some candidates said yes. “This is a man who has broken the law and he should be impeached,” Warren told the audience. “Whether it would pass the Senate or not, this is a moment in history and every single person in Congress should be called on to vote and to live with that vote for the rest of their lives.”

But most of the forum was focused on policy, with several candidates arguing that they were clearly opposed to the Trump administration and would replace his policies with platforms aimed at helping black communities. O’Rourke, for example, called attention to his plan on voting rights and recently released plan on education. Harris, one of the candidates who got significant applause at the forum, discussed her proposal to decriminalize marijuana.

Some candidates were asked to discuss recent controversies for their campaigns. Buttigieg answered to continued criticism of his handling of a South Bend police shooting and he department’s issues years before that. Biden, the current primary frontrunner and another candidate who saw serious applause from the audience, reiterated his support of civil rights issues and his role in Obama administration after facing recent scrutiny for his record on opposing school desegregation busing in 1970 and 1980s.

“They did a significant background check. … I doubt [Obama] would have picked me if these accusations about me being wrong on civil rights was correct,” Biden said.

When candidates did discuss Trump, it was to spotlight how his administration had harmed black voters and other people of color, with several candidates condemning his recent remarks about the four first-term congresswomen and the Department of Justice’s recent decision not to prosecute the NYPD officer accused of using a chokehold on Eric Garner, an unarmed black man who died shortly after a 2014 arrest. Other candidates called attention to the Trump’s administration’s impact on relationships with predominantly black countries.

“He’s isolating our nation from other nations in the world,” Booker said. “It’s time for the United States to lead again. And be a leading force of light and justice and democracy.”

In all, the convention showed that opposition to the Trump presidency remains high, and that 2020 Democrats candidates are beginning to criticize Trump more publicly as he continues to make offensive remarks. But even as candidates openly criticize Trump, they’re also attempting to reach voters through policy proposals, highlighting that they don’t want to simply oust Trump from office, they want to change the culture that helped drive his election.

As the forum came to a close, one of the most forceful condemnations of Trump came from Weld, a Republican mounting a long-shot primary challenge against Trump. “Donald Trump is a raging racist and he made that choice a long time ago,” Weld told the audience. “We can send a two-word message to Donald Trump as he packs his golf clubs: You’re fired.”

Midsommar has a deeply trans narrative hiding in plain sight
How Biden hopes to use executive actions to address America’s “compounding crises”
This week in TikTok: Bored teens are making self-isolation content
Trump’s tweet about Greta Thunberg was one of his ugliest yet
How to do everything, by the Highlight
Donald Trump says journalists should be free from fear of violent attacks