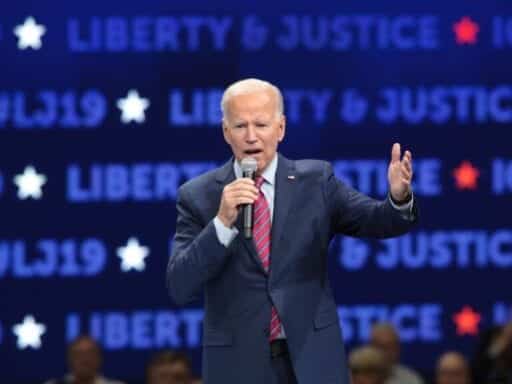 With three months until the caucuses 2020 Democratic candidates searched for their standout moment at key Iowa event.

With three months to go until the Iowa caucuses, Democratic presidential candidates offered voters impassioned pitches about their proposals and their ability to beat Donald Trump at the Liberty and Justice Celebration dinner Friday.

The dinner — historically the largest gathering of voters in Iowa — marked the beginning of a final push to the caucuses at a moment when support for a number of candidates has seen major shifts.

For those who have benefitted from those changes, like Sen. Elizabeth Warren and South Bend Mayor Pete Buttigieg, the evening provided an opportunity to solidify that momentum; and for candidates like former Vice President Joe Biden and Sen. Bernie Sanders, who have seen some erosion of support, the dinner was a chance to reenergize their base and make their cases to voters still undecided.

Recent polling suggests those candidates whose campaigns have faltered some — and those that are on the upswing — have room to expand. A Suffolk University/USA Today poll from late October found 29 percent of voters are still undecided on who to choose. And a September Des Moines Register poll found that only about 20 percent of voters know for certain who they will caucus for.

The Suffolk/USA Today poll, and one released on Friday by the New York Times/Siena College also suggest large shifts in support. Biden entered the race as the presumed frontrunner, and still leads in national polling; the Times/Sienna poll put him in fourth, however, behind Warren, Sanders, and Buttigieg (in that order). Buttigieg has seen a large increase in support in recent Iowa polling, including in the Suffolk/USA Today survey, which put him in third.

As the Iowa race enters its final stretch, candidates tried to hammer home their core messages

At Friday’s event, Buttigieg worked to visualize that increasing support by filling 12 sections of the Wells Fargo Arena in Des Moines, Iowa, which held more than 13,000 attendees this year, according to NBC News.

As those supporters cheered him on, Buttigieg gave an address that worked to cement his position as a centrist in contrast to Warren (in a recent interview, he said the primary would ultimately come down to him and the senator) and that endeavored to link himself to President Barack Obama, who gave an acclaimed address at the event in 2007.

“We will fight when we must fight. But I will never allow us to get so wrapped up in the fighting that we start to think fighting is the point,” Buttigieg said, referencing Warren framing the upcoming election as a fight against Trump. “The point is what lies on the other side of the fight.”

He reminded voters he’d first visited Iowa as a volunteer “for a young man with a funny name” — Obama — and cast himself as another young politician with vision that went beyond the experience on his resume.

“If talking about hope and belonging sounds optimistic to you for a time like this, fine,” Buttigieg said, according to the Des Moines Register. “Call it optimistic, but do not call it naïve. Because I believe these things — not based on my age, but based on my experience.”

Warren, who the Times poll found to be the current frontrunner, sought to remind voters about her ideas, and argued progressive policies were the way to energize voters both during the primary and the general election.

“We win when we offer solutions big enough to touch the problems that are in people’s lives,” she said. “Fear and complacency does not win elections; hope and courage wins elections. I’m not running some consultant-driven campaign with some vague ideas that are designed not to offend anyone. I’m running a campaign based on a lifetime of fighting for working families. I’m running a campaign from the heart.”

And although Warren had released her plan to fund Medicare-for-all Friday following criticism for having previously failed to do so, she focused more on political ideology.

“We need big ideas, and here’s the critical part: We need to be willing to fight for them,” Warren said, according to the New York Times. “It’s easy to give up on a big idea, but when we give up on big ideas, we give up on the people whose lives would be touched by those ideas.”

Biden spent much of his time speaking about morals and his plan to beat Donald Trump. Overall, he made the same pitch he has made since the start of his campaign: only he can beat Trump.

“We have got to beat this man. It’s not enough that we just beat him — we’ve got to beat him soundly so everyone knows we are not going back to a time when another president like him can hold that office,” Biden said, according to NPR. “And I will beat him like a drum if I’m your nominee, and he knows it.”

Biden also touted his extensive background, offering a veiled attack against candidates newer to politics like Warren and Buttigieg, arguing that there would be “no time for on-the-job training” for the next president.

Meanwhile, Sanders gave his usual stump speech on the Green New Deal and Medicare-for-all and was the only top-tier candidate to not attack other opponents, according to The New York Time’s Sydney Ember and Reid J. Epstein.

“Do we continue the status quo politics which has enabled the wealthiest people in our country, the largest corporations and their lobbyists, to have extraordinary influence?” Sanders asked.

Unlike most of the other candidates, Sanders did not buy any seating for his supporters but instead hosted a watch party for them. He donated the $20,000 in ticket fees to the Iowa Democratic Party.

Beyond the current four candidates leading in Iowa, others took the night’s opportunity to distill their images and messages. Entrepreneur Andrew Yang spoke about his plan for a universal basic income; Sen. Kamala Harris — who has had to shed some staff among fundraising difficulties — highlighted her long record of public service; Sen. Cory Booker delivered a remarks full of positivity, asking voters to cast their ballots for “who can best inspire us to be the truth of who we are.”

One Democrat who did not address the crowd was former Texas Rep. Beto O’Rourke. Despite being expected to give a speech, as 14 other Democratic candidates did, O’Rourke announced ahead of the event that he was ending his presidential bid.

The annual Liberty and Justice Celebration dinner — formerly known as the Jefferson Jackson dinner — is part fundraiser, part campaigning event that dates back at least three decades. And it becomes an especially important event every four years.

The dinner before an election year gives presidential hopefuls an opportunity to address Iowa voters at a key time: three months before they will be tasked with deciding who they’d like to be the Democratic presidential nominee.

The event has a history of boosting campaigns, according to the Des Moines Register: in 1975, then-Georgia Gov. Jimmy Carter won an informal straw-poll held after the dinner among Iowa Democrats, and the moment drove his campaign toward nomination. In 2007, Obama also found the dinner to be a turning point in his campaign after he stole the hearts of the attendees with a much lauded address.

Because of its significance, candidates pay a significant sum of money (i.e. Sanders’ $20,000 donation) for their supporters to attend and will often deck them out in outfits, with signs, and instructions for chants. They also hold events leading up to the dinner such as rallies and marches — all in hope of catching the eye of Iowa Democrats.

The stakes were high for all candidates: it’s a tight race among top-tier candidates, and this was an opportunity for one person to emerge as a solid frontrunner. Meanwhile, for the lower-polling candidates, this dinner could have been the breakout moment they needed to gain momentum — to become a success story of like Obama. Unlike in 2007 and 1975, that did not seem to happen this time around. Fortunately for those candidates still hoping for a major swell of support, there are three months left until the February 3 caucuses.

Why the US and Iran are fighting over this tiny waterway
The mutually beneficial war between Bernie Sanders and Mike Bloomberg, explained
“There should be zero discrimination”: Joe Biden spoke in defense of transgender rights at Thursday’...
TikTok clone Instagram Reels is just one of the many times Facebook has copied its competitors
Why Bernie Sanders is right and wrong about female presidential candidates
Welcome to The Highlight’s Gender Issue