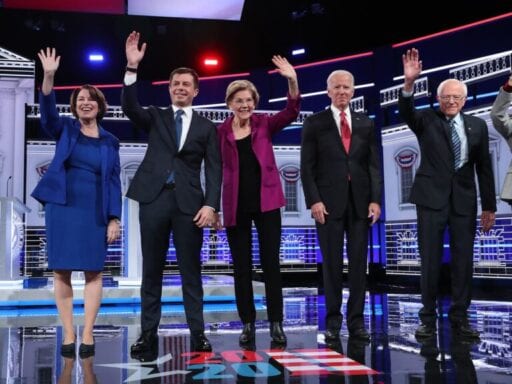 Share
Loading...
Democratic presidential candidates arrive on stage before the start of a debate at Tyler Perry Studios on November 20, 2019, in Atlanta. | Joe Raedle/Getty Images

All seven candidates who qualified for the debate said they wouldn’t cross a picket line.

On Friday afternoon, Sen. Elizabeth Warren (D-MA) declared that she was willing to boycott next week’s Democratic debate at Loyola Marymount University in California in solidarity with campus workers who are picketing for better pay and health care.

She immediately set off a domino effect that would eventually see every other Democratic presidential candidate who qualified for the debate make the same pledge.

Unite Here Local 11 — a union that represents 150 cooks, dishwashers, cashiers, and servers on LMU’s campus who are employed by the food services company Sodexo — plans to picket at the debate next Thursday to express their disapproval of Sodexo’s handling of negotiations with the union.

“Honestly, the proposals are relatively modest ― living wage, improvements on health care,” Susan Minato, co-president of Unite Here Local 11, told HuffPost. “So we did not anticipate that there would be … difficulty over it. But we were wrong. They abruptly canceled negotiations.”

Sodexo has disputed Minato’s characterization. “Sodexo is 100 percent committed to reaching an agreement, and any statement that we have left the bargaining table is not accurate,” a Sodexo spokesperson told Vox.

On Friday, Warren tweeted support for the union in its standoff with Sodexo and pledged to skip the debate if the labor dispute is not resolved by then. In her tweet, she called on the Democratic National Committee, which organizes the debates, to “find a solution” to the problem.

.@UniteHere11 is fighting for better wages and benefits—and I stand with them. The DNC should find a solution that lives up to our party’s commitment to fight for working people. I will not cross the union’s picket line even if it means missing the debate.

About 30 minutes later, Sen. Bernie Sanders (I-VT) made a similar pledge, tweeting that he would “not be crossing [Unite Here Local 11’s] picket line.”

I stand with the workers of @UniteHere11 on campus at Loyola Marymount University fighting Sodexo for a better contract. I will not be crossing their picket line.

Within the next few hours, all of the other 2020 candidates who have qualified for the debate made the same pledge in rapid succession: first, businessman Andrew Yang, who was followed (in order) by former Vice President Joe Biden, billionaire activist Tom Steyer, South Bend, Indiana, Mayor Pete Buttigieg, and Sen. Amy Klobuchar (D-MN).

I won’t be crossing a picket line. We’ve got to stand together with @UniteHere11 for affordable health care and fair wages. A job is about more than just a paycheck. It’s about dignity. https://t.co/nn4tb5q8wt

Warren’s decision to move first to apply pressure on Sodexo and the DNC underscored her political and policy commitments to organized labor and the working class.

While every major Democratic presidential candidate supports organized labor, it’s telling that Warren and Sanders were the first candidates to back the union and to risk missing a debate in a demonstration of their principles.

It’s also not surprising that Buttigieg, a candidate who has carved out a niche for himself as an establishment-friendly moderate, was one of the last to make the same commitment.

Campus workers and students have protested against Sodexo at LMU over claims that the corporation has not provided a “fair contract” to employees since November.

Sodexo, which provides catering services to many universities across the nation, has a reputation for exploitation. For years, labor activists and watchdogs have documented poor pay, dangerous work conditions, and anti-union tactics among Sodexo’s hundreds of thousands of employees around the world.

With all of the candidates pledging to boycott the debate unless the labor dispute is resolved, there is a theoretical possibility that the debate could be canceled entirely. But most likely, the public scrutiny will force the DNC and Sodexo to find some kind of resolution.

This goofy bird vs. the fossil fuel industry
DACA is in a state of legal limbo. Now a Texas judge might rule to kill it.
The dog-walking startup Wag is exploring a sale
How to get your stimulus check, and other key questions, answered
Why famous dudes grow beards to deal with existential crises
How Whole Foods, yoga, and NPR became the hallmarks of the modern elite