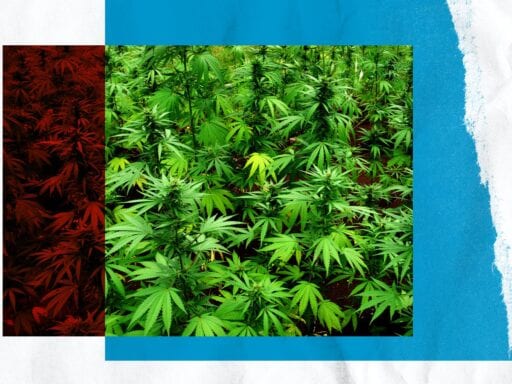 If the measures win, more than one in three Americans will live in a state where marijuana is legal.

Between the presidential election, governors’ races, and down-ballot contests, this year’s election features a lot of important choices. Among those, voters in five states will have a chance to legalize marijuana for recreational or medical uses.

If all these measures are approved, the United States would go from having 11 states in which marijuana is legal to 15. More than a third of Americans would live in a state with legalized marijuana, up from more than a quarter today.

The ballot initiatives represent a massive shift in drug policy. A decade ago, zero states had legalized marijuana. Then, in 2012, Colorado and Washington became the first two states to legalize cannabis for recreational use and sales.

That policy may reflect a change in public opinion — one that would make a federal crackdown on marijuana legalization very unpopular: As it stands, public opinion surveys show that even a majority of Republicans, who tend to take more anti-marijuana views than their Democratic and independent peers, support legalization.

In that context, legalization advocates are optimistic about their prospects this year, even in historically red states like Arizona, Montana, and South Dakota.

In November, four states will vote to legalize marijuana for recreational purposes. They will all allow sales, leading to the kind of tax-and-regulate, commercialized system that’s taken form in other legalization states.

Here are the 2020 ballot measures:

All four states’ measures follow the same commercialized model for legalization, but that’s not the only model for legalization. Washington, DC, for example, allows possession, use, growing, and gifting but not sales (although the “gifting” provision has been used, in a legally dubious manner, to “gift” marijuana with purchases of overpriced juices and decals).

Some drug policy experts have pushed for a legalization model that doesn’t allow a big marijuana industry to take root, out of fears that such an industry would, similar to alcohol and tobacco companies, irresponsibly market its product and enable misuse or addiction. A 2015 RAND report listed a dozen alternatives to the standard prohibition of marijuana, from putting state agencies in charge of sales to allowing only personal possession and growing:

While marijuana is much safer than alcohol, tobacco, and other illegal drugs, it’s not totally safe. Misuse and addiction are genuine problems, with millions of Americans reporting that they want to quit but can’t despite negative consequences. A review of the research by the National Academies of Sciences, Engineering, and Medicine linked cannabis use to other potential downsides, including respiratory issues (if smoked), schizophrenia and psychosis, car crashes, lagging academic and other social achievements, and lower birth weight (if smoked during pregnancy).

It’s these risks that have driven even some supporters of legalization to call for alternatives to the commercialized model. Opponents of legalization have also jumped on the concerns about Big Marijuana potentially marketing the drug irresponsibly, causing bad public health outcomes.

Legalization advocates, however, generally argue that marijuana’s potential downsides are so mild that the benefits of legalization greatly outweigh the problems with prohibition, including the hundreds of thousands of arrests around the US, the racial disparities behind those arrests, and the billions of dollars that flow from the black market for illicit marijuana to drug cartels that then use the money for violent operations around the world.

Supporters are winning the argument in more and more states, and typically doing so in a way that establishes a commercialized, tax-and-regulate system — setting up the US for a big marijuana industry in the coming years.

In two states, voters will have a chance to legalize medical marijuana, joining the 33 states that have already done so. The two states’ measures generally follow the same track as the other states’ laws, letting patients with certain conditions get a doctor’s recommendation for marijuana and obtain it at dispensaries.

Here are the 2020 ballot measures:

A review of the evidence from the National Academies of Sciences, Engineering, and Medicine found little evidence for pot’s ability to treat health conditions outside chronic pain, chemotherapy-induced nausea and vomiting, and patient-reported multiple sclerosis spasticity symptoms. But most states, relying largely on anecdotal evidence, have allowed medical marijuana for many other conditions.

Supporters argue there’s no time to get approval for and run scientific studies, which can take years, to prove the benefits of a drug that isn’t very harmful anyway. And they point out that the federal government has stifled marijuana research for years, making it impossible to get good evidence. So they’d rather states let sick patients get access to marijuana now instead of wait for broader federal reform and research.

Opponents, however, point to the lack of rigorous evidence. They argue that it should be up to public health agencies, such as the Food and Drug Administration, to approve the use of medical marijuana, as is true for other medicines. They’ve been particularly critical of more lax approaches to medical marijuana — with states, like California, enacting laws that in the past amounted to total legalization in practice.

Marijuana legalization is very popular in the US

There’s very good reason to believe an increasing number of states will legalize marijuana in the coming years: Legalization is very popular, and support for it has been growing for decades.

According to surveys from Gallup, support for legalization rose from 12 percent in 1969 to 31 percent in 2000 to 66 percent in 2019. Surveys from Civic Science, the General Social Survey, and the Pew Research Center have found similar levels of support.

Support for legalization is even bipartisan. Both Gallup and Pew have found that a slim majority of Republicans, with much bigger majorities of Democrats and independents, support legalization.

Medical marijuana is even more popular, with support in polls typically hitting 80 percent, 90 percent, or more.

The positions of US political leaders, however, don’t align with public opinion. President Donald Trump opposes marijuana legalization at the federal level, previously suggesting the issue should be left up to the states. Former Vice President Joe Biden, the Democratic nominee for president, has called for the decriminalization of cannabis — repealing criminal penalties, particularly prison, for possession but for not allowing sales — but has opposed legalization at the federal level.

Meanwhile, only Illinois and Vermont have legalized marijuana for recreational use through their legislatures. The other nine states that have legalized did so through ballot measures.

As lawmakers lag behind, voters will find another way to legalize marijuana for recreational or medical purposes — as five more states might demonstrate this year.

The Pussy Riot says it’s behind the World Cup protesters
Last week the US wanted to break up Big Tech. Now it’s trying to supersize it.
Amazon can’t end fake reviews, but its new system might drown them out
Watch AOC ask Mark Zuckerberg if she can run fake Facebook ads, too
The complete list of 2018 Emmy nominees
“A colossal waste”: Some Republicans question Joe Biden’s coronavirus relief plan