21 kids sued the government over climate change. A federal court dismissed the case. 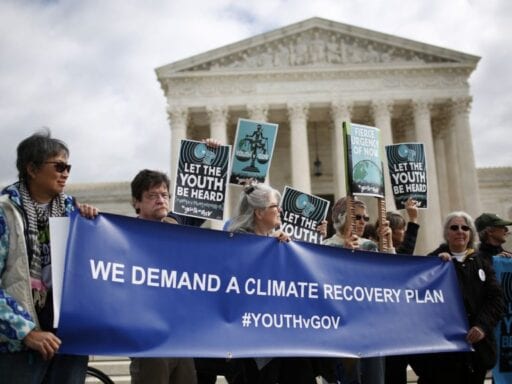 The Juliana v. US climate change lawsuit has been dismissed by the 9th Circuit Court of Appeals. | Win McNamee/Getty Images

Plaintiffs in the Juliana v. US lawsuit alleged the government violated the rights of young people to a safe climate.

A three-judge panel in the US Ninth Circuit Court of Appeals ruled 2-1 to dismiss the Juliana v. US lawsuit on Friday, a seminal case involving 21 young people who sued the federal government for violating their right to a safe climate. The decision is a blow to climate activists and shows the limits of the courts’ willingness to assign legal responsibility to the government for the harms caused by greenhouse gases.

The judges all agreed that climate change is an urgent, threatening problem, but ruled that the plaintiffs, who were between the ages of 8 and 19 when the suit was filed, didn’t have standing to sue. They also said that climate policies must come from the legislative branch. “The panel reluctantly concluded that the plaintiffs’ case must be made to the political branches or to the electorate at large,” according to the ruling.

Writing for the majority, Circuit Court Judge Andrew Hurwitz conceded that climate risks are growing and that young people stand to suffer the worst impacts of rising average temperatures, like increasingly destructive floods and fires.

“In the mid-1960s, a popular song warned that we were ‘on the eve of destruction,’” he wrote. “The plaintiffs in this case have presented compelling evidence that climate change has brought that eve nearer.”

Andrea Rodgers, a senior attorney at Our Children’s Trust, the nonprofit backing the youth who filed the lawsuit, described the decision in an email as “unprecedented and contrary to American principles of justice.” Her organization has vowed to appeal the ruling in the coming weeks.

As politicians have failed to deliver adequate climate policies, courtrooms have emerged as a prominent venue for advancing an agenda to limit emissions, and the Juliana case was one of a number of climate change lawsuits working their way through various US courts. More than a dozen cities and counties have filed suit against companies like Exxon for the climate-related harms caused by their products. But the Juliana case stood out among climate lawsuits because it challenged the federal government rather than fossil fuel companies.

Despite proposing a novel legal theory — that a safe climate is a civil right and that the government has violated it through policies like leasing public lands for coal mining — the suit managed to get surprisingly far. It survived several motions to dismiss and intervention by the US Supreme Court.

But what the plaintiffs wanted — a government plan to phase out fossil fuels and pull greenhouse gases back out of the air — was not something the courts could provide. “Reluctantly, we conclude that such relief is beyond our constitutional power,” Hurwitz wrote.

However, District Court Judge Josephine Staton thought otherwise and did not mince words in her dissent. “It is as if an asteroid were barreling toward Earth and the government decided to shut down our only defenses,” she wrote. “Seeking to quash this suit, the government bluntly insists that it has the absolute and unreviewable power to destroy the Nation.”

The Juliana case has been the highest-profile lawsuit filed by Our Children’s Trust, but the group has also filed similar climate change civil rights suits on behalf of young people in state courts.

While the 9th Circuit ruling was a setback for climate activists, many are undeterred from using the courts to fight climate change and hold polluters accountable. Recently, some law students have also begun to protest against the law firms representing fossil fuel companies in these climate suits, pressuring firms to drop them as clients and urging classmates not to work for them.

Climate litigation has also emerged as an issue in the 2020 campaign for president. Many of the Democratic contenders have called for fossil fuel companies to be held liable for climate damages and for sowing disinformation. Vermont Sen. Bernie Sanders has gone as far as to call for criminal prosecution of greenhouse gas emitters.

All the while, more suits and legal complaints are being filed. On Thursday, a group of four indigenous tribes in Louisiana filed a human rights claim at the United Nations. They argued that the US government, through its contributions to climate change and its failure to stop it, has violated the rights of these groups, who are seeing lands eroded by rising seas.

So climate change still has many more days in court to come.