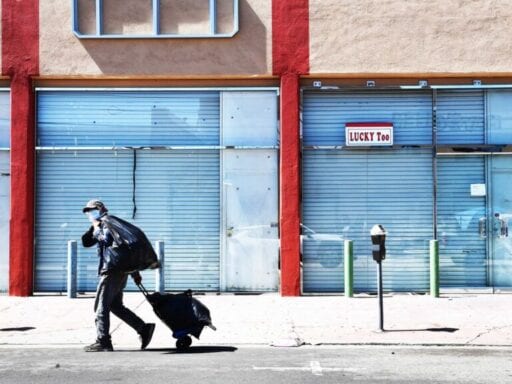 The House of Representatives is expected to approve the latest $484 billion stimulus package on Thursday. It will largely set aside more money for the Paycheck Protection Program, created by the last stimulus bill, which offers loan guarantees for small businesses.

And lawmakers are already discussing the possibility of a fourth package, with more economic relief, particularly to states. But it’s not clear how big the appetite is for another round of stimulus in some parts of Congress.

The economic catastrophe isn’t confined to the United States, either; the entire world is expected to see what the credit rating agency Fitch Ratings on Wednesday called “a recession of unprecedented depth in the post-war period.”

And the world’s poorest are the most vulnerable. The World Food Program, a United Nations agency, said the pandemic could push approximately 265 million people to the brink of starvation.

26 million unemployed in the US

More than 4.4 million people filed jobless claims the week ending April 18. That brings the total to 26 million over the five-week period during which many businesses have remained shut. The staggering numbers could add some fuel to the movement to start reopening economies, even though the coronavirus crisis has not abated.

The big question now: How much worse is it going to get? The number of filings has declined somewhat since late March and early April, when claims reached peaks of more than 6 million.

But as Vox’s Ella Nilsen reports, the unprecedented crisis has overwhelmed unemployment insurance systems across the country. These systems vary from state to state, with some more equipped to handle claims than others. That could mean a delay between when people lose their jobs and can actually apply for benefits.

Fitch Ratings revised its global economic outlook (GEO) on Wednesday, saying “World GDP is now expected to fall by 3.9% in 2020,” and that “This is twice as large as the decline anticipated in our early April GEO update and would be twice as severe as the 2009 recession.”

And the prospect of a quick bounce-back after the pandemic subsides has all but faded. As the Washington Post reported Wednesday, economists are now concerned about what they call a “W-shaped” recovery, which would happen if the US reopens too quickly and then must abruptly close again because the coronavirus resurges and because of lag time in bankruptcies and defaults.

“Pretending the world will return to normal in three months or six months is just wrong,” Diane Swonk, chief economist at Grant Thornton, told the Post. “The economy went into an ice age overnight. We’re in a deep freeze. As the economy thaws, we’ll see the damage done as well. Flooding will occur.”

The House is expected to approve the latest round of stimulus

The Senate passed a $484 stimulus bill earlier this week that’s mostly funding to keep small businesses afloat. Members of the House of Representatives are returning to Capitol Hill (after a resolution to allow members to vote remotely got pulled) to vote on the package Thursday. The bill is expected to pass, though some progressive lawmakers have said the package doesn’t go far enough.

The package mostly provides an influx of cash to the Paycheck Protection Program (PPP), which has already run out of the $349 billion initially set aside to give small businesses forgivable loans. This latest legislation will allocate another $320 billion for the program.

Of that, $60 billion will be earmarked for community-based lenders, like credit unions, small banks, and nonprofits, which is intended to increase access to the program by minority-owned, rural, and other businesses. Another $60 billion will go to another type of emergency loan program.

The rest of the money in the package will more directly address the health care crisis, giving a $75 billion influx to hospitals and setting aside $25 million for expanding nationwide testing capacity. These are concessions Democrats won in this bill, though they failed to secure additional money for states and local governments whose budgets have been depleted by the coronavirus pandemic.

But this bill is merely a temporary salve to the economic pain that America is experiencing, which is why top Democrats are calling it an “interim” bill — a bridge from the $2 trillion CARES Act passed in late March to some as-yet-undetermined CARES 2 package.

Money for states and localities will likely top the list of things that Democrats want to go into that CARES 2 package, though they’re likely to push for even more ambitious plans; some have proposed hazard pay for front-line workers, and Rep. Ilhan Omar (D-MN) has introduced a bill to forgive rent and mortgages during the pandemic.

But getting those measures passed might not be so easy. Senate Majority Leader Mitch McConnell has suggested that he’s not super keen on the idea of giving more money to states, saying on a radio program that states should consider bankruptcy — which, as Vox’s Li Zhou points out, is “a process almost all states currently cannot use.”

Which means a much bigger political battle might erupt for the next round of stimulus. But Thursday’s unemployment numbers suggest America is going to need a lot more aid before this is over.

Another crisis caused by the coronavirus: Hunger

Global coronavirus cases have now topped 2.6 million, with more than 185,000 deaths. The pandemic has spread to nearly every corner of the world, and by the day, the coronavirus is more acutely threatening the most vulnerable parts of the globe.

The threat of a virulent pandemic in these places is obvious: It is impossible to social distance or access adequate sanitation in a refugee camp. Those internally displaced or still living in war-torn areas also deal with poor infrastructure, insufficient medical care, and a lack of critical supplies.

Add the global economic crisis and the situation is even more dire for low- and middle-income countries. For example, global remittances — money sent from people working overseas back home — are expected to dip more than 20 percent this year, from $714 billion to $572 billion, according to the World Bank. That wipes out billions of dollars that make up a significant chunk of many countries’ economies.

Taken together, these economic realities are exacerbating another problem: hunger. The UN’s World Food Program is estimating that the number of people facing starvation in 2020 could double, to 265 million.

“These new projections show the scale of the catastrophe we are facing,” WFP chief economist Arif Husain said in a statement. “We must make sure that tens of millions of people already on the verge of starvation do not succumb to this virus or to its economic consequences in terms of loss of jobs and incomes.”

Beasley, WFP’s executive director and former Republican governor of South Carolina, has requested the UN expedite $2 billion in pledged aid to the program, and an additional $350 million for logistical support, to get aid where it’s needed in a world where international travel is shut down.

“We are looking at widespread famines of biblical proportions,” Beasley told the Guardian.

The New York City Council on Wednesday proposed an “Essential Workers’ Bill of Rights” as part of a big legislative package to deal with the fallout of the coronavirus, according to Gothamist.

The bill would require companies to provide hazard pay to front-line workers (anyone deemed essential under New York’s stay-at-home orders) during the pandemic. Specifically, it would require companies with more than 100 essential workers to offer bonuses depending on the hours employees are working; for example, a $60 bonus for four- to eight-hour shifts. It would last for as long as the lockdown orders are in place.

This is part of a broader plan to help gig workers, individual and commercial renters, and homeless people. The bad news here is that it’s not clear whether it will actually go anywhere, and whether the city will face additional budget constraints because of the pandemic.

But it’s still good news because it may add to the reorienting of how America sees its essential workforce. As Vox’s Emily Stewart writes, “the reality is that essential workers in the midst of the coronavirus crisis are fast-food workers, social workers, cleaners, retail associates, transit workers, home health aides, and even those who provide support for victims of domestic violence. They’re often not highly paid individuals, and they’re risking their lives.”

The Democratic proposal in the US Senate to offer hazard pay and New York’s packet of bills at least show that how the country sees essential workers might be changing for the better. As one retail worker told Stewart: “Honestly, I just kind of wish if we’re considered essential, maybe we’d be paid [as] essential.”

These 4 Midwestern states are seeing worrying Covid-19 spikes
The Oscars’ new “popular film” category is a bad idea from a panicked organization
Democrats win the Senate — by the slimmest margin possible
Bernie Sanders can unify Democrats and beat Trump in 2020
6 myths about Roe v. Wade, debunked
8 ways to go out and stay safe during the coronavirus pandemic