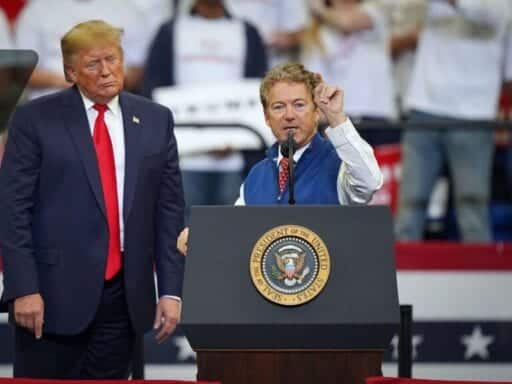 Share
Loading...
US President Donald Trump looks on as Sen. Rand Paul (R-KY) speaks at a campaign rally at the Rupp Arena on November 4, 2019 in Lexington, Kentucky. | Bryan Woolston/Getty Images

Current laws offer limited recourse for whistleblowers in the case of retaliation.

President Donald Trump this week made it clear — yet again — that he’d like to unmask the CIA whistleblower who filed a complaint about his conduct with Ukraine. Sen. Rand Paul (R-KY) threatened to do so as well.

“Do your job and print his name!” Paul said in a statement directed at the press this past weekend.

Trump’s fixation on exposing the whistleblower has major consequences: It could prevent others from coming forward and put this individual’s career at risk. Were this person’s identity to get out, they could be particularly vulnerable to professional retaliation because they’re a member of the intelligence community.

Intelligence community whistleblowers have limited recourse from a legal standpoint. Not only are there scant laws protecting them, experts told Vox, it’s also especially hard for them to fight back against any retaliation because they’re barred from talking about their work in a public capacity.

“Traditionally, the intelligence community — including agencies such as the CIA and NSA — have been hostile to any outside oversight and they operate in secrecy,” David Colapinto, a founding attorney of the National Whistleblower Legal Defense Fund, tells Vox. “These agencies have viewed whistleblowing as risking the disclosure of classified information.”

Government officials in other agencies are able to more publicly discuss their complaints with the press, and bring them to other bodies within the government like the Office of Special Counsel, as well as the courts. But because of its emphasis on protecting sensitive data and government secrets, the intelligence community’s protections for whistleblowers are significantly less robust than those offered by other federal agencies.

When it was passed in 1998, the Intelligence Community Whistleblower Act laid out a process for people to legally file complaints, but didn’t detail any recourse for them if they were to face professional retaliation. It wasn’t until 2013 when former President Barack Obama issued a policy directive that an internal process was established for whistleblowers to sound the alarm if they felt they were being targeted professionally. (Aspects of this directive were also codified as law in 2014.)

Even then, the onus is still on the whistleblower to raise this concern in case they are fired, demoted, or lose their security clearance after they come forward about agency abuse or fraud. And there’s no guarantee their complaint will result in a potential job being reinstated, or a supervisor being penalized — a risk that many whistleblowers across different agencies face.

Whistleblowers have to advocate for themselves in fights against retaliation

If a whistleblower in the intelligence community does face retaliation, they have to advocate for themselves. The main channel for doing so is via an internal complaint to the Intelligence Community’s Inspector General, an official who’s been appointed explicitly to scrutinize misconduct at government agencies.

“The person must file a claim of retaliation with the relevant Inspector General. There is then an internal agency review of the claim,” says Liza Goitein, a co-director of the Liberty and National Security Program at the Brennan Center. If the Inspector General determines that the complaint is not credible, the whistleblower has an opportunity to appeal to an external review board.

Because of how sensitive the workings of the intelligence community are, the process for raising a retaliation complaint is incredibly opaque.

There’s also the possibility of a potentially awkward conflict of interest, when the superiors who are instigating the retaliation, whether that’s a firing or demotion, are also involved in determining if it qualifies as an overreach in response to the whistleblower’s actions.

“It is … riddled with a huge conflict because the head of the agency that takes the retaliation ultimately gets to decide the whistleblower’s retaliation case,” Colapinto emphasizes.

What’s especially concerning in this case is that any retaliation that comes from the president is something that would need to be addressed outside of the standard complaint process.

“If the retaliation comes from the president there isn’t any executive branch entity that can hold him accountable; that will be up to Congress and the American people,” says Smithberger. In a standard retaliation complaint, the president would actually be the person who enforces the protections for the whistleblower, a set-up that’s unlikely to be effective as it relates to the current complaint against Trump.

Due to looming concerns about such retaliation and the few options whistleblowers have to combat it, House Intelligence Committee Chair Adam Schiff has said protecting this person’s identity is of “paramount concern.” “We are taking all the precautions,” Schiff said in an ABC interview. The whistleblower has said they are willing to respond to questions from House Republicans as well as those from the Majority, but some lawmakers including Rep. Jim Jordan (R-OH), have already suggested this isn’t enough of a commitment.