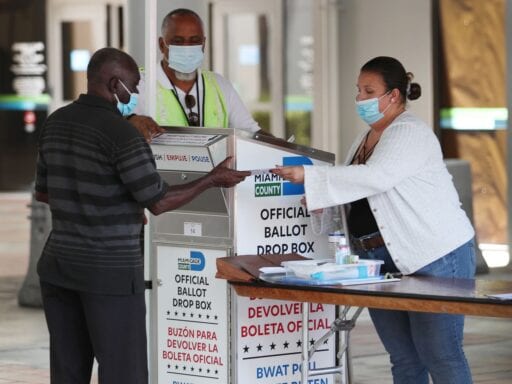 An incumbent is facing a tough reelection campaign, and Republicans are in tight races to replace outgoing representatives.

As the pandemic continues to rage in Florida, voters will choose nominees for Congress and the state legislature during Tuesday’s primaries.

A Republican member of Congress is facing a tough primary campaign in the 15th District as he comes under fire for alleged campaign finance law violations. And a crowded field is jockeying for the chance to replace two House Republicans who announced they wouldn’t seek reelection this year: Rep. Ted Yoho, who represents the Third District, and Rep. Francis Rooney, who represents the 19th District.

The pandemic may well hurt turnout. During the state’s Democratic presidential primary in March, turnout was at its lowest since 2004, with less than a third of registered voters casting their ballot. That might be because there were neither statewide races nor a competitive GOP presidential primary on the ballot in March, but it could also be a sign of what is to come in Tuesday’s primaries and the general election this fall.

President Donald Trump has recently encouraged Florida voters to submit mail-in ballots, also known as absentee ballots, as an alternative to in-person voting. That’s despite his repeated claim that the practice, which has existed since the Civil War but has become more widespread amid the pandemic, will lead to rampant election fraud. (Numerous studies have found that mail-in voting fraud is actually quite rare.)

Early voting began on August 8 and polls will close at 7 pm on August 18. In the March primaries, about half of Florida voters participated in early or mail-in voting.

Here are the races to watch:

Rep. Ross Spano, a former state representative and practicing lawyer for over two decades, was accused of accepting $180,000 in undisclosed campaign loans from two friends in 2018 when he was first elected to Congress. He remains under investigation by the Department of Justice and the Florida Bar. He has acknowledged that he made mistakes with regard to the loans, but defended that they were “completely inadvertent and unintentional.”

And even if he claims victory in Tuesday’s primaries, Spano could face a strong opponent in Democratic state Rep. Adam Hattersley, who served in the Navy in Iraq.

Yoho, who was first elected to Congress in 2012, announced in December that he wouldn’t run for reelection in the solidly Republican Third District, which encompasses north-central Florida, including Ocala.

“Our Nation is the best on the planet and as time passes, new ideas need to be instilled to preserve the Republic we’ve been blessed with,” Yoho said in a Facebook post at the time.

Yoho was one of only four members of the House to vote against an anti-lynching bill in February that was later blocked in the Senate, arguing that it constituted an “overreach of the federal government” because hate crimes fall under the jurisdiction of states. He also faced scrutiny in July following a heated exchange concerning crime and policing issues with Rep. Alexandria Ocasio-Cortez, a Democrat from New York, in which a reporter for The Hill overheard him use a sexist slur. (He has publicly apologized for the tone of the conversation but denies using the slur.)

As Yoho steps down, a crowded field of 10 GOP candidates is vying to take his place. His own former deputy chief of staff Kat Cammack, a Trump loyalist, is currently leading the pack in notable endorsements and individual fundraising contributions. Judson Sapp, a railroad CEO, and James St. George, a surgeon, have the richest campaigns in the race — albeit ones that were over half self-funded, according to July financial disclosures.

Democrats have put forth business owners Adam Christensen and Tom Wells and healthcare IT professional Phillip Dodd — but whoever wins the GOP primary Tuesday will likely go on to be the safely red district’s next representative.

Rooney, a two-term member of Congress and the US ambassador to the Vatican under President George W. Bush, announced in October that he wouldn’t seek reelection. He told Fox News at the time that he hoped to serve as a model for term limits after accomplishing what he set out to do in Congress: obtain funding for projects in the Florida Everglades and passing legislation to ban offshore drilling.

It has been a contentious primary that has drawn a significant amount of outside funding from groups including the Club for Growth, which has spent $2.5 million on TV and radio ads backing Donalds, and a related super PAC called Conservative Outsider PAC, which has spent almost $460,000 on media bashing Eagle. Askar has raised the most funds by far with a campaign war chest of almost $3.7 million, but polling suggests that it will nevertheless be a tight race between him, Donalds, Figlesthaler, and Eagle.

The 26th, 27th, and 16th Districts will be battlegrounds come November

Democrats are defending seats in the 26th and 27th Districts in two high-spending races, as well as trying to unseat a seven-term Republican incumbent in the 16th District. If Democrats pick up a seat in Florida, they will have a majority in the state’s congressional delegation for the first time since 1989.

The 26th District’s incumbent Democrat, Rep. Debbie Mucarsel-Powell, will likely face off with the mayor of Florida’s Miami-Dade County, Carlos Gimenez, if he wins Tuesday’s GOP primary as expected. And in the 27th District, Rep. Donna Shalala, a Democrat who was first elected to Congress in 2018 and served as secretary of Health and Human Services in the Clinton administration, is defending her seat in the predominantly Hispanic District 27, which includes Miami.

Republican Rep. Vern Buchanan is facing down the latest Democratic effort to unseat him in the 16th District, but with a $1.6 million campaign coffer, he remains in a strong position relative to his main challenger, Margaret Good, who is part of the Democratic Congressional Campaign Committee’s “Red to Blue” program that supports Democratic candidates trying to flip GOP-held districts.

We put a “sin tax” on cigarettes and alcohol. Why not meat?
Germany used to be a champion of open borders in Europe. Not anymore.
A huge boost in infrastructure spending is very popular — if rich people pay for it
An artist painted on the American flag. The governor of Kansas wants her work destroyed.
The debate about whether expanded unemployment insurance is too generous, explained
McCain rips Trump's family separation policy as affront to American decency