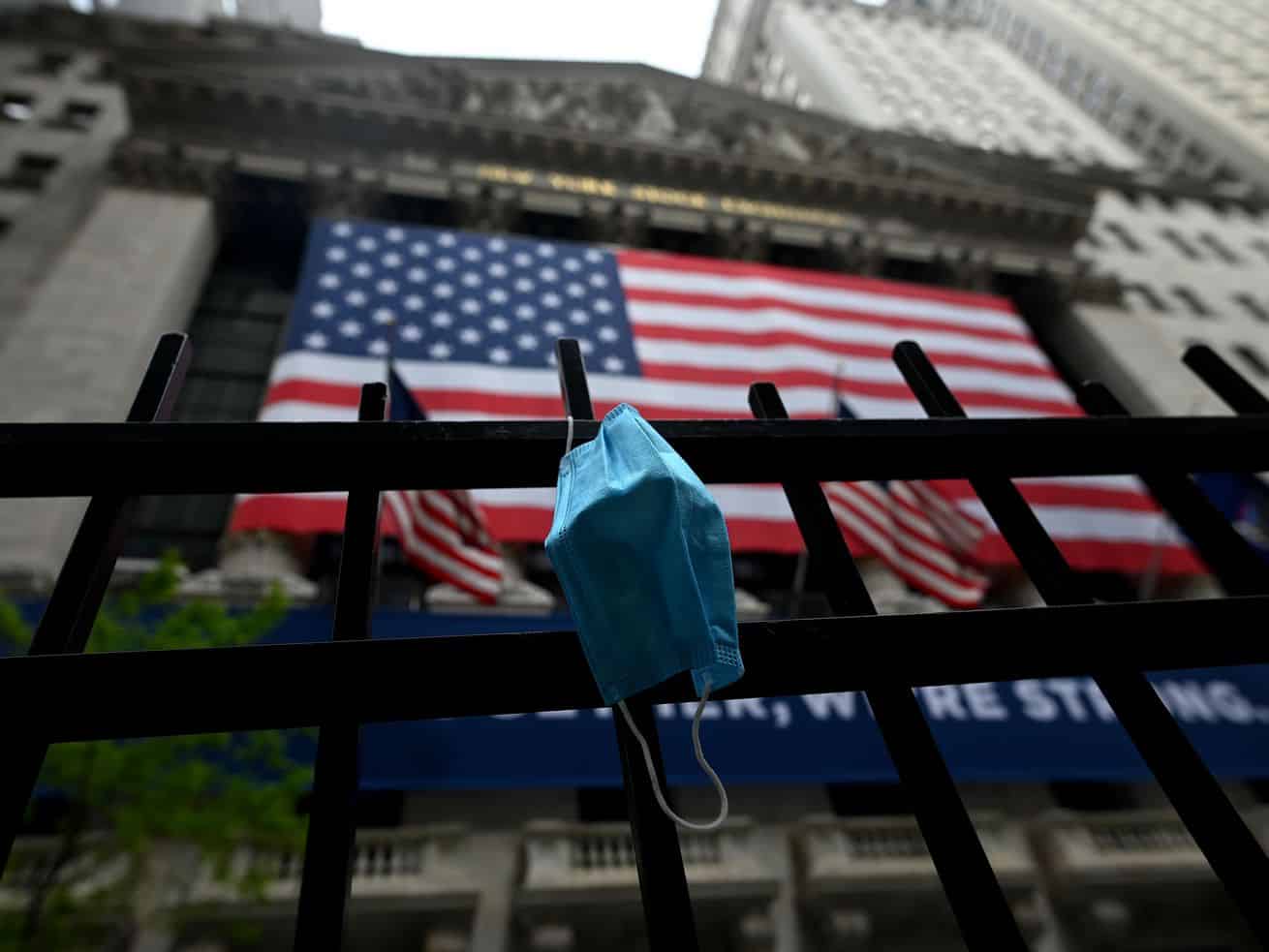 The next month could determine who lives to see normalcy come back.

The future of America’s Covid-19 epidemic can now be distilled into this: long-term confidence and hope, but short-term uncertainty and, perhaps, even despair.

Vaccines are rolling out quickly, setting up the country to crush the outbreaks that have warped our lives for the past year.

But in the short term, perhaps the next month, the US faces a few potential paths. The worst scenario: A fourth surge of the coronavirus outpaces vaccinations and kills thousands more people even as the country nears the finish line with Covid-19. The best possibility: The accelerating vaccine rollout and continued vigilance keep the virus at its current level or, hopefully, results in fewer infections — letting the US cross the finish line safely and with more lives saved. Then there’s a middle path: Cases rise, but vaccines shield the country from more hospitalizations and deaths.

The path the US takes, though, will be decided by one of the most unpredictable things of all: human behavior.

The public could loosen up on Covid-19 precautions too quickly, discarding masks and failing to social distance before enough people are vaccinated. As has already been done in some areas, policymakers could push the country in this direction by ending restrictions before the vaccine rollout is truly at critical mass. Either of those things, or a combination of both, could lead to a fourth surge.

But if Americans hold out just a bit longer, and vaccination rates continue to pick up, the US could reach the end of the current large outbreaks — as cases dwindle down close to zero — before that happens.

The good news is, an end seems to be in sight. At current vaccination rates, the country could inoculate its entire adult population by July, leaving us ample time over the summer to start getting our lives back to normal and, hopefully, celebrate with others. One country that has vaccinated the bulk of its population, Israel, has shown this is possible, reopening its economy and crushing the Covid-19 curve at the same time.

“Yes, there are some near-term concerns,” Jen Kates, director of global health and HIV policy at the Kaiser Family Foundation, told me. “But so far we’re — cautiously — on the other side of it. … If we push ahead and really accelerate vaccination, by the summer we’ll be in a much, much better place.”

The question now is what lies between here and there.

The worst short-term scenario: Cases, hospitalizations, and deaths rise in a fourth surge

This is the worst-case scenario — the one that CDC Director Rochelle Walensky said fills her with a feeling of “impending doom.”

Here’s how it could play out: In the next few weeks, states continue to loosen the restrictions they put in place to combat Covid-19, opening up businesses (particularly indoor locations) and revoking their mask mandates. The public follows suit, embracing the near-end of Covid-19 by going out and engaging in close-contact activities with family, friends, and strangers, even if they’re not yet fully vaccinated. The vaccine campaign can’t keep up with all of this new social activity, and more people catch the virus than are inoculated.

So the coronavirus spreads, jumping between all these vulnerable people mingling together again, while more-infectious coronavirus variants spread rapidly at the same time, pushing the wave even higher. (B.1.1.7, the variant that appears to have originated in the UK, is now the dominant cause of new infections in the US, Walensky said Wednesday.)

That said, it doesn’t seem like the US overall is heading toward the worst-case scenario, at least not yet. A recent uptick in Covid-19 cases might have hit a plateau. The US still has a lot of daily new Covid-19 cases — nearly 500 times that of Australia after controlling for population — but it may not be getting worse.

This might already be happening in Michigan, which has been hit hard by Covid-19 in the past few weeks. The state’s current surge isn’t quite as bad yet as its previous one, but it’s still leading to more hospitalizations and deaths. If it’s already happening there, it could happen elsewhere.

The middle short-term path: Covid-19 cases rise, but not hospitalizations and deaths

Throughout the pandemic, Covid-19 deniers have claimed rises in cases were only a “casedemic,” meaning that cases rose but hospitalizations and deaths didn’t, and therefore there was nothing to worry about.

That was nonsense for much of the past year, fueled by a crucial misunderstanding: Increases in hospitalizations and deaths tend to lag behind increases in cases because it takes time for people to get sick, land at the hospital, and die after getting infected.

But something like this could happen now, thanks to the vaccines. So far, the populations more vulnerable to Covid-19, based on age, have gotten more of the vaccine. The result is that more than 76 percent of adults 65 and older have gotten at least one dose, and more than 57 percent have been fully vaccinated (either by the one-shot Johnson & Johnson vaccine or a two-shot vaccine from Moderna or Pfizer). Over the past year, this age group represented around 80 percent of all Covid-19 deaths in the US.

With much of the vulnerable vaccinated, a rise in Covid-19 cases may not translate to a significant rise in hospitalizations and deaths. Younger people may contract the virus, but they won’t show up at the hospital or die at the same rates as older individuals. The virus would lose the race to the vaccines.

So the US may still see a fourth surge in cases. But, as Amesh Adalja at the Johns Hopkins Center for Health Security told me, “It’s going to be of a different flavor than prior waves” because the vaccines “have defanged the virus,” including the variants that have been discovered so far.

This is still speculative.

“I think it’s a bit too early to tell,” George Mason University epidemiologist Saskia Popescu said about that scenario. Reducing a fourth surge to a “casedemic” still requires action — ensuring vaccines continue to go out quickly, especially to vulnerable populations.

The best short-term scenario: No fourth surge at all

This scenario — where cases, hospitalizations, and deaths all hold steady or continue to fall — is contingent on policymakers not reopening their states too quickly, the American people continuing to follow public health guidelines such as social distancing and masking, and the vaccine rollout improving, or at the very least, maintaining its current pace.

It could also be helped along by warmer weather in most of the country in the coming weeks, pushing Americans to do more in outdoor spaces where the virus doesn’t spread as easily.

History might not give much reason for optimism. America has generally done a bad job with its policy approach and public adherence throughout the pandemic (hence America’s high death toll relative to many of its developed peers). As Popescu put it, “The US has really struggled when it comes to maintaining vigilance when the finish line is in sight.”

But the country could do it. If Americans hold out a little while longer — possibly just several weeks — we could suddenly find ourselves in a world where most US adults have gotten at least one shot of the vaccine. If we get there and avoid the first scenario on this list, it could translate to tens of thousands more of us being around to celebrate.

The longer-term scenario is more certain — and hopeful

For all the uncertainty surrounding the short term, there’s a longer-term scenario that seems very likely: Thanks to the vaccines, the US will reach the end of the large outbreaks, and the summer will be the beginning of our return to normal.

There’s a real-world example that should fill Americans with hope: Israel. Thanks to good planning and flexibility, Israel has fully vaccinated more than 56 percent of its population, including the vast majority of older demographics. That’s allowed it to almost fully open its economy again as Covid-19 cases plummet to levels not seen since summer 2020.

This is incredibly encouraging. It shows that the vaccines work and are truly a way out of the pandemic. “It’s there,” Adalja said. “The real-world data shows what future we’ll eventually achieve if everything stays on track and we continue to vaccinate.”

The US is well on its way to that point. Already, more than 19 percent of the US population is fully vaccinated. With more than 3 million doses being administered a day, the country will be able to fully inoculate the majority of its population in a little more than a month — and all adults within three months. If that trend continues, the US could reproduce Israel’s crushed curve in just months or even weeks.

Then it will finally happen. We’ll find ourselves back at parties with family, at dinners with friends, and in movie theaters with strangers. What was considered too risky just months ago will be the normal we’ve desired for a year.

“I reckon that point will become apparent in retrospect,” Bill Hanage, an epidemiologist at Harvard, previously told me. “We will suddenly realize that we are laughing, indoors, with people we don’t know and whose vaccine status is unknown, and we will think, ‘Wow, this would have been unimaginable back when …’”

There are still major challenges ahead. Avoiding the deadliest of the short-term scenarios could save tens of thousands of lives. Ensuring enough people get vaccinated — by both improving access and addressing vaccine hesitancy — will be crucial. And it’s a race against time: The possibility that worse variants will emerge increases as the virus continues to spread and mutate.

It’s important to help the rest of the world in its efforts too — not simply for humanitarian reasons, but because the coronavirus and its variants could creep back into the US from other countries.

Still, the happier future now looks like a matter of when, not if. After a year of our futures constantly seeming so uncertain, we now have this respite to look forward to — and it’s likely just a matter of time.