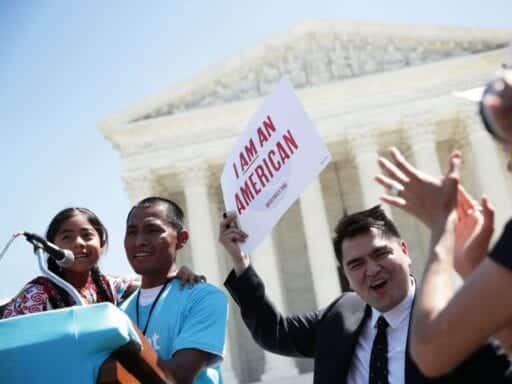 The Supreme Court hears an epic showdown over the Obama era immigration program on Tuesday.

The Supreme Court will hear arguments Tuesday on a trio of cases asking whether the Trump administration acted properly when it decided to wind down the Deferred Action for Childhood Arrivals (DACA) program — an Obama-era program that allows unauthorized immigrants who were brought to the the US as children to live and work in the United States.

A question looms over tomorrow’s hearing, however: Why did the Supreme Court agree to hear these cases in the first place?

Certainly the human stakes in these cases — Trump v. NAACP, McAleenan v. Vidal, and Department of Homeland Security v. Regents of the University of California — are enormous. Almost 670,000 immigrants are protected by DACA. Ending the program opens them up to deportation. Families could be ripped apart; communities will be devastated. There really is a significant human toll here.

But the Supreme Court typically only hears cases that involve a significant legal question. Indeed, the Court’s own rules state that it will only agree to hear a case “for compelling reasons,” and they emphasize that the Court typically only hears “important” questions of federal law. In this instance, the legal issue at the heart of the case is tiny.

As a general rule, the executive branch must provide a reasoned explanation when it seeks to make a policy change that falls within its lawful discretion. The lower courts held the Trump administration’s explanation of why it was ending DACA inadequate because the administration doesn’t explain why it thinks that DACA is bad policy.

But here’s the thing: nothing prevents the administration from drafting a new memo that adequately explains its policy reasoning. The Trump administration could end DACA tomorrow. It just needs to complete a homework assignment first.

And that brings us to a second mystery surrounding the three DACA cases: why didn’t the Trump administration simply produce a new policy memo, rather than litigating these cases all the way to the Supreme Court? If their goal is to end DACA, they’ve chosen a needlessly difficult path to this goal.

The solution to this later mystery may be that, by bringing this case all the way to the Supreme Court, immigration skeptics could win a durable victory that could last well after Trump leaves office. The justices could potentially declare that any program like DACA is illegal, and therefore beyond the power of any future president.

That’s what’s potentially at stake tomorrow: not just the fate of hundreds of thousands of immigrants who have been in limbo since Trump ended DACA in 2017, but also the ability of a Democratic president to implement liberal immigration reforms through executive action.

DACA at the Supreme Court: how this could all play out

Broadly speaking, there are three ways the Court could decide these cases.

First, it is possible that the Court could affirm the lower court decisions, handing a narrow victory to the Dreamers. This outcome is unlikely, given the Court’s Republican majority and the views expressed by several members of that majority in a similar 2016 case.

Second, the Court could hand Trump a narrow victory. It could say that the memos the Trump administration already produced regarding its decision to wind down DACA are adequate, and thus the administration can move forward without having to do any more work.

If the Court takes this second approach, Trump may even pick up a few votes from the Court’s Democratic minority. Liberal Justice Elena Kagan, in particular, has been quite open about her desire to mitigate the Court’s conservatism by pushing for narrow decisions.

Finally, the Court could hand a crushing defeat to DACA beneficiaries — holding that the DACA program is, itself, unlawful. In this last scenario, the Court would not just allow DACA to be wound down under Trump — it would forbid any future president from reviving it.

Let’s consider each of these possibilities in turn.

Scenario #1: A narrow win for DACA

To understand the lower court decisions leaving DACA in place, it’s important to understand just how DACA functions, and how its defenders justify it under existing law.

DACA grants several benefits to a select group of immigrants, who came to the United States as children. When the government names someone a DACA beneficiary, it announces that it will not enforce laws permitting that person to be deported for as long as they remain a beneficiary. DACA also grants certain privileges to beneficiaries, including the ability to work in the United States and to participate in programs like Social Security and Medicare.

The executive branch’s power to grant work authorizations and federal benefits flow from various statutes allowing the Department of Homeland Security to provide these benefits to certain immigrants. But the power to allow these immigrants to remain in the country flows from something more basic. As the Obama administration explained in a 2014 memo, “there are approximately 11.3 million undocumented aliens in the country,” but Congress only appropriated enough resources “to remove fewer than 400,000 such aliens each year.”

In other words, federal immigration officials cannot possibly remove every undocumented immigrant in the country. And so they must prioritize certain immigrants and deprioritize others. DACA represents the Obama administration’s decision to identify certain immigrants as very low priorities for enforcement.

The legal term for this kind of judgment is “prosecutorial discretion,” and it is well established that the government may decide not to enforce the law against certain individuals. The Obama administration’s decision not to remove certain immigrants is akin to a prosecutor’s decision not to bring charges against low-level marijuana offenders, or a cop’s decision to let someone off with a warning rather than writing them a speeding ticket.

In Heckler v. Chaney (1985), moreover, the Supreme Court held that the executive branch’s decisions not to bring a particular enforcement action is typically non-reviewable by courts. “An agency’s decision not to prosecute or enforce,” Justice William Rehnquist wrote for the Court in Heckler, “is a decision generally committed to an agency’s absolute discretion.”

The Trump administration argues, in its brief in the DACA cases, that Heckler cuts in both directions. If the decision not to enforce a particular law against a particular individual is left up to “an agency’s absolute discretion,” then so too should be the decision whether to retain a policy of non-enforcement.

This is a strong argument. As mentioned above, the courts haven’t really doubted that the Trump administration could end DACA, so long as the administration properly explains its reasons for doing so.

Heckler, however, said in a footnote that an agency might not have unreviewable discretion if it claims that it “lacks jurisdiction” over a particular decision. Thus, as an appeals court explained in one of these decisions now under review by the Supreme Court, it’s one thing for a court to respect the fact that agencies are allowed to make policy decisions without being second guessed by judges. It’s another “to say that an agency’s non-discretionary belief that it lacked the power to enforce the law was similarly ‘committed to agency discretion.’”

So, to clarify, agencies get to make policy. But courts get to decide what the law says.

The upshot is that the Supreme Court could agree with the lower courts. Yet, for reasons explained below, such a decision is very unlikely. Even if the Supreme Court agrees with the lower courts’ distinction between legal justifications and policy justifications, the Court’s Republican majority is likely to agree with the administration that DACA is illegal.

Scenario #2: A narrow loss for DACA

A 2018 memo from then-Secretary Kirstjen Nielsen, for example, claims that DACA should be wound down because it is “critically important for DHS to project a message that leaves no doubt regarding the clear, consistent, and transparent enforcement of the immigration laws against all classes and categories of aliens.” Read charitably, this sentence could be read to offer a mixture of legal justifications (the legality of DACA is uncertain) and policy justifications (we must send a harsh message to immigrants) for winding down DACA.

Perhaps the Supreme Court would deem that to be enough of a policy-based explanation to allow the Trump administration to end DACA.

The primary advantages of this approach would be that it would avoid the difficult question of whether DACA is itself legal, and it could potentially appeal to liberal justices like Kagan who want to avoid the worst-case scenario for DACA beneficiaries. Allowing Trump to wind down DACA would be a horrible outcome for Dreamers in the short term, but a narrow loss might allow a future president to revive DACA.

Scenario #3: A permanent loss for DACA

In United States v. Texas (2016), decided shortly after Justice Antonin Scalia’s death left the Court down a justice, the Court split 4-4 on whether President Obama’s efforts to expand DACA and create a similar program known as DAPA (Deferred Action for Parents of Americans and Lawful Permanent Residents) were legal. The Court neither explained why the justices voted the way they did in this 2016 case, nor disclosed how each justice voted, but the questions at oral argument indicate that the Court likely split along party lines.

The conservative case against DAPA and the DACA expansion was rooted in fears that allowing these programs to continue would have given too much unchecked discretion to President Obama. During oral arguments in Texas, for example, Chief Justice John Roberts worried that a decision upholding DAPA could permit the president to “grant deferred removal to every … unlawfully present alien in the United States right now”

Since Texas, moreover, the Court’s gained a fifth Republican vote, and its only grown more skeptical of claims that the executive branch may make big policy changes without seeking new approval from Congress (though it also seems to set this skepticism aside when the Trump administration wishes to impose harsh new policies on immigrants).

It is very likely, in other words, that if the Supreme Court reaches the question of whether DACA is legal, five justices will deem DACA to be illegal. That wouldn’t just allow the Trump administration to wind down DACA, it would mean that no future president may ever implement a similar program. A President Warren or Biden would not be able to reinstate DACA under this scenario.