30 million Americans have lost their jobs in 6 weeks 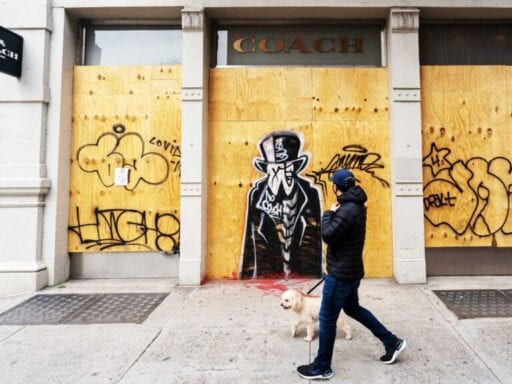 Share
Loading...
A man walks by a Coach storefront that is boarded up in New York City on April 23. | David Dee Delgado/Getty Images

Millions of Americans are out of work amid the coronavirus crisis, and we still don’t know the full picture.

More than 3.8 million people filed initial unemployment insurance claims during the week ending April 25, according to data released by the Department of Labor on Thursday morning. That brings the total number of people applying for benefits over the last six weeks to roughly 30 million.

It’s a staggering amount of people who have filed for unemployment since the coronavirus pandemic triggered nationwide shutdowns and a severe economic downturn weeks ago. In late March, the Labor Department registered 3.3 million jobless claims in a single week, shattering previous records. And each subsequent week, the figures released are of a magnitude that would have seemed unimaginable months ago: 6.9 million, 6.6 million, 5.2 million, 4.4 million. By comparison, the previous record was 695,000 in 1982.

Unemployment numbers from the full month of April will be released on Friday, May 8, and provide a fuller picture of the damage the crisis has done to the American job market. But the next unemployment report is sure to be ugly: The US economy shrank by 4.8 percent in the first quarter of the year. Analysts and experts estimate the unemployment rate could reach 13, 20, even 30 percent in the months to come.

As Vox’s Matt Yglesias recently noted, there are caveats to Thursday’s jobless claims.

The Coronavirus Aid, Relief, and Economic Security Act, or CARES Act — the $2.2 trillion stimulus President Donald Trump signed into law in March — expands the scope of people who can apply for and collect unemployment benefits. People who are self-employed, freelancers, and gig economy workers who were previously ineligible are now eligible.

And still, the situation might be worse than it seems: unemployment insurance lines have been jammed in states all over, and a lot of people who want to apply haven’t been able to. In other words, there are probably more laid-off or furloughed people than are showing up, and what’s showing up is already Great Depression-level figures for unemployment.

It’s worth remembering this is in large part a deliberate maneuver by government officials: The US has shut down parts of its economy in order to respond to the public health crisis represented by Covid-19. If businesses do lay off workers, as many have, the government has put in place expanded unemployment benefits to help people stay afloat, and also to compel them to stay home instead of encouraging them to rush out to find other work. The hope is that this is temporary, but what the federal government does next to intervene and how quickly the country can get the virus under control are important determinants.