36 years ago today, one man saved us from world-ending nuclear war 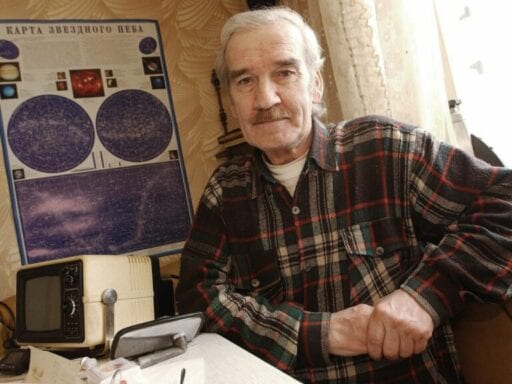 On September 26, 1983, the planet came terrifyingly close to a nuclear holocaust.

The Soviet Union’s missile attack early warning system displayed, in large red letters, the word “LAUNCH”; a computer screen stated to the officer on duty, Soviet Lt. Col. Stanislav Petrov, that it could say with “high reliability” that an American intercontinental ballistic missile (ICBM) had been launched and was headed toward the Soviet Union. First, it was just one missile, but then another, and another, until the system reported that a total of five Minuteman ICBMs had been launched.

“Petrov had to make a decision: Would he report an incoming American strike?” my colleague Max Fisher explained. “If he did, Soviet nuclear doctrine called for a full nuclear retaliation; there would be no time to double-check the warning system, much less seek negotiations with the US.”

Reporting it would have made a certain degree of sense. The Reagan administration had a far more hardline stance against the Soviets than the Carter, Ford, or Nixon administrations before it. Months earlier President Reagan had announced the Strategic Defense Initiative (mockingly dubbed “Star Wars,” a plan to shoot down ballistic missiles before they reached the US), and his administration was in the process of deploying Pershing II nuclear-armed missiles to West Germany and Great Britain, which were capable of striking the Soviet Union. There were reasons for Petrov to think Reagan’s brinkmanship had escalated to an actual nuclear exchange.

But Petrov did not report the incoming strike. He and others on his staff concluded that what they were seeing was a false alarm. And it was; the system mistook the sun’s reflection off clouds for a missile. Petrov prevented a nuclear war between the Soviets, who had 35,804 nuclear warheads in 1983, and the US, which had 23,305.

And it’s likely hundreds of millions more would have died once the conflict disrupted global temperatures and severely hampered agriculture. International Physicians for the Prevention of Nuclear War put the potential death toll from starvation at about 2 billion.

Preventing the deaths of hundreds of millions, if not billions, of people was a costly decision for Petrov. If he had been wrong, and he somehow survived the American nuclear strike, he likely would’ve been executed for treason. Even though he was right, he was, according to the Washington Post’s David Hoffman, “relentlessly interrogated afterward [and] never rewarded for his decision.”

After the Cold War, Petrov would receive a number of commendations for saving the world. He was honored at the United Nations, received the Dresden Peace Prize, and was profiled in the documentary The Man Who Saved the World. “I was just at the right place at the right time,” he told the filmmakers. He died in May 2017, at the age of 77. Two new books about the Petrov incident and other nuclear close calls in 1983 (related to the NATO exercise Able Archer) came out just last year: Taylor Downing’s 1983 and Marc Ambinder’s The Brink.

Petrov was not the only Russian official who’s saved the world. On October 27, 1962, Vasili Arkhipov, a Soviet navy officer, was in a nuclear submarine near Cuba when US naval forces started dropping depth charges (a kind of explosive targeting submarines) on him. Two senior officers on the submarine thought that a nuclear war could’ve already begun and wanted to launch a nuclear torpedo at a US vessel. But all three senior officers had to agree for the missile to fire, and Arkhipov dissented, preventing a nuclear exchange and potentially preventing the end of the world.

Even more recently, on January 25, 1995, Russian early warning radars suggested that an American first strike was incoming. President Boris Yeltsin was alerted and given a suitcase with instructions for launching a nuclear strike at the US. Russian nuclear forces were given an alert to increase combat readiness. Yeltsin eventually declined to launch a counterstrike — which is good, because this was another false alarm. It turns out that Russian early warning systems had picked up a Norwegian-US joint research rocket, launched by scientists studying the northern lights.

But September 26, Stanislav Petrov Day, is as good a time as any to celebrate the ordinary officers who took a stand when it counted to prevent hundreds of millions of deaths. And it’s as good a time as any to remember that as long as the US and Russia retain massive nuclear arsenals, these kinds of close calls will remain possible — and in the future, a false alarm could result in an accidental first strike.

Trump’s executive order on campus anti-Semitism, explained
A Pennsylvania poll worker explains the painstaking process of counting votes
Hooded Justice was Watchmen’s very first hero. The show just changed his legacy.
House Republicans’ top-ranking woman is facing the toughest reelection of her career
How to fight climate change at home
Why Pete Buttigieg is suddenly surging in the polls