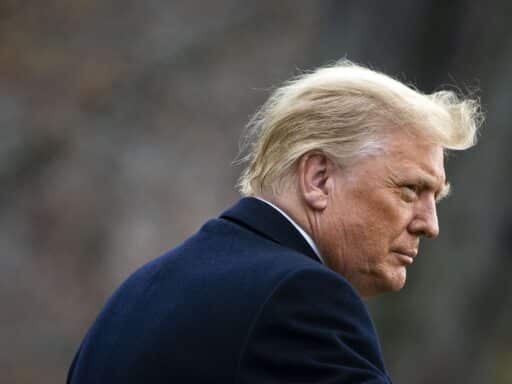 On Sunday, the Washington Post published a recording of an extraordinary phone call between President Donald Trump and Georgia Secretary of State Brad Raffensperger, in which the outgoing president urged Raffensperger, a Republican, to “find” enough votes to overturn President-elect Joe Biden’s victory in Georgia.

Over the course of the call, which took place on Saturday, Trump raised several baseless claims that some of the ballots cast in the state of Georgia are “corrupt,” as well as evidence-free claims that some unidentified person is “shredding ballots” in the state. Trump claims that Raffensperger and his office’s general counsel, Ryan Germany, are taking a “big risk” — suggesting that Raffensperger and Germany are engaged in criminal conduct themselves by covering up these imagined election crimes. And then Trump drops this bombshell:

All I want to do is this. I just want to find 11,780 votes, which is one more than we have because we won the state.

Biden won Georgia by 11,779 votes, so if Raffensperger were to somehow “find” 11,780 votes, Trump would take the lead in that state. Raffensperger, to his credit, repeatedly rebuffed Trump.

Trump’s call with Raffensperger wasn’t just a direct attack on American democracy. It also was most likely a criminal offense. It is a federal felony to knowingly attempt “to deprive or defraud the residents of a State of a fair and impartially conducted election process” through “the procurement, casting, or tabulation of ballots that are known by the person to be materially false, fictitious, or fraudulent under the laws of the State in which the election is held.”

After the recording of Trump’s phone call became public, several prominent lawyers, including former Attorney General Eric Holder, suggested that Trump may have violated this statute.

As you listen to the tape consider this federal criminal statute. pic.twitter.com/eqoP1cVob5

Four criminal laws that Trump may have violated

There is no evidence that Georgia lost or otherwise miscounted its ballots, a point that Raffensperger made repeatedly during the call. So, in pressuring Raffensperger to “find” nearly 12,000 fake votes, Trump seemingly attempted to deprive the residents of Georgia of a fair and impartial election, and he did so by trying to procure false, fictitious, or fraudulent ballots.

Still, this statute requires federal prosecutors to prove that Trump had a particular state of mind when he pressured Raffensperger to rig the election. To convict Trump, prosecutors would have to prove that the outgoing president sought to have ballots counted that were “known by [Trump] to be materially false, fictitious, or fraudulent under the laws of the State in which the election is held.”

Thus, Trump’s lawyers could argue that Trump genuinely believed the various conspiracy theories that he touted during his call with Raffensperger, and that Trump thought there actually are thousands of lawful ballots that Raffensperger could “find.” To overcome this argument, prosecutors would have to prove, beyond a reasonable doubt, that Trump knew he lost the election and that any “found” ballots would be fraudulent.

If Trump were convicted under this statute, he could be imprisoned for up to five years.

Another federal law makes it a crime to “conspire to injure, oppress, threaten, or intimidate any person … in the free exercise or enjoyment of any right or privilege secured to him by the Constitution or laws of the United States.” Trump was joined on the call by White House Chief of Staff Mark Meadows and at least two lawyers. Thus, to the extent that he conspired with them to attempt to strip even a single Georgia voter of a constitutional right to vote, Trump could potentially be imprisoned for up to 10 years.

Georgia state law may also criminalize Trump’s attempt to overthrow an election. The state’s law makes it a crime to willfully tamper “with any electors list, voter’s certificate, numbered list of voters, ballot box, voting machine, direct recording electronic (DRE) equipment, or tabulating machine.” And while Trump did not directly tamper with the vote count in Georgia, state law also makes it a crime to, “with intent that another person engage in conduct constituting a felony,” solicit another person to commit such a felony. A person convicted of soliciting a felony in Georgia “shall be punished by imprisonment for not less than one nor more than three years” (although the penalty can be higher if they solicit a crime punishable by life in prison or by death).

Another federal law makes it a crime to “willfully fail or refuse to tabulate, count, and report such person’s vote,” although it is less likely that Trump could be prosecuted under this statute. While Georgia law makes it a crime to solicit another person to commit any felony, federal law only criminalizes solicitation of a “felony crime of violence” — meaning that the crime must involve “the use, attempted use, or threatened use of physical force against property or against the person of another.”

Whatever prosecutors decide, however, there is no question that Trump’s actions were a significant attack on democracy. They likely were criminal as well.

Netanyahu has failed to form a government, sending Israelis back to the voting booth
Trump digs in on immigration amid crisis
How Joe Biden could reorient foreign policy around climate change
Trump’s reality TV presidency is being crushed by reality
Peter Brimelow, the white nationalist with close ties to the White House’s economic adviser, explain...
Julián Castro endorses Elizabeth Warren for the White House