4 races to watch in Delaware’s primary 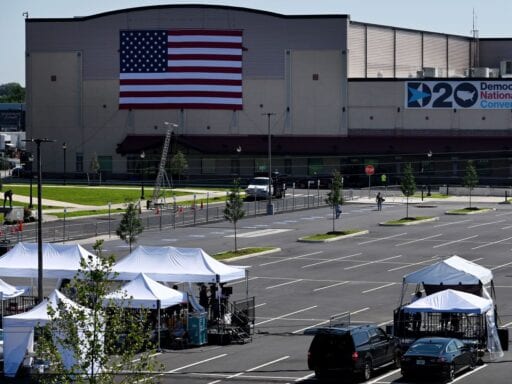 Share
1       Tweet
Delaware, the site of the 2020 Democratic National Convention, is the last state in the US to hold its primary. | Olivier Douliery/AFP via Getty Images

The country’s first state holds the last state primary in the nation Tuesday.

Delaware might be the First State, but it has the last-in-the-nation primary.

The second-smallest state will conclude the nation’s primary season Tuesday with several key races at the state and county levels, including primaries for US Senate and a governor’s race.

The US Senate Democratic primary features a now-familiar dynamic, a center-left incumbent facing off against an insurgent progressive challenger who supports the Green New Deal and Medicare-for-all. (Though the race here between Sen. Chris Coons and his challenger doesn’t seem nearly as close as some of the House primaries we’ve seen in 2020.) Meanwhile, the state’s GOP governors primary is a six-candidate contest that will serve as a key ideological bellwether for a seemingly waning Delaware Republican Party.

More than 100,000 absentee ballots were requested for the state primary Tuesday, and about 56,000 had already been returned as of last Wednesday, according to the state Department of Elections. The state’s late primary will result in a compressed general election season; mail-in ballots for the general will need to be sent out just four days after the primary.

Polls close at 8 pm Tuesday, and completed mail-in ballots must be received by Election Day in order to be counted. Here are four key primary races we’re keeping an eye on in Delaware.

Incumbent Democratic Sen. Chris Coons was first elected in 2014, and in the six years he’s been in office, he’s earned a reputation as a moderate Democrat, albeit a socially liberal one, who has shown the ability to work across the aisle on key issues. In his first reelection campaign, he’s facing off against progressive challenger Jess Scarane, a 35-year-old candidate who was endorsed by the Democratic Socialists of America and who is pushing for a Green New Deal and Medicare-for-all.

“The Senate race is interesting because as this is, this has been kind of a storyline within Democratic primaries of you have a more centrist incumbent being challenged by a more progressive candidate,” University of Delaware professor Paul Brewer, a local politics expert, told Vox.

Brewer compared this year’s primary to a similar race two years ago between the state’s senior Sen. Tom Carper and progressive Kerri Evelyn Harris, in which the challenger from the left earned about 30 percent of the vote. “That’s a substantial amount of support. On the other hand, she didn’t come close to beating him in the primary,” said Brewer. “One of the things to look for is [whether] Scarane comes closer to Coons. It would be a pretty big upset if she beat him.”

While some recent Democratic primaries have turned bitter, Delaware Democrats see these races differently. “There’s often a question that gets asked about whether primaries are good for the party or bad for the party,” Delaware Democratic Party Executive Director Jesse Chadderdon told Vox. “More than anything, they’re symbolic of what is healthy about the party, which is just this huge influx of new ideas and new energy.”

On the Republican side, James DeMartino and Lauren Witzke are facing off for the right to challenge a Senate seat that Cook Political Report rates safely Democratic.

Ten years ago, the average Delaware Republican statewide candidate was typically moderate and business-friendly, but according to Chadderdon, times have changed. “I don’t know where that voice in the party is anymore, the stereotypical chamber of commerce Republican.”

However, Delaware Republican Party chair Jane Brady told Vox that those types of politicians don’t match with today’s Republican voters in the state. “I don’t think there are many Republicans in Delaware that fit what I think is an outdated stereotype of who the Republican voters are and who Republican candidates are,” she said.

Brady is excited about this year’s field because she’s been working to expand the party’s electoral bench. Of the six candidates in this year’s primary, three candidates stand out. Scott Walker is a relative political outsider who made a name for himself two years ago when he won a surprise victory in the Republican primary for the state’s House race. He also has a history of making incendiary remarks.

While running for US House in 2018, Walker wrote a lengthy tirade on Facebook, calling Carper “a redneck,” accusing all Democrats of being racist, accused Facebook CEO Mark Zuckerberg of “hating Israel,” challenging former Vice President and Delaware native Joe Biden to a debate and calling him a “racist loser,” and calling his Democratic opponent Rep. Lisa Blunt Rochester an “Aunt Tom.”

Walker faces a cadre of conservative candidates, including state Sen. Colin Bonini, who was the party’s nominee four years ago, losing to now-Democratic incumbent John Carney. But despite the presence of two former statewide nominees in the race, neither of them managed to grab the state party’s endorsement. That went instead to Julianne Murray, who was the only one of the three to attend the state party convention, where she gave an anti-mask, anti-lockdown speech.

“There’s some differences [between the candidates], but they’re similar enough in their views on the issues that if you supported any one of them, you will be able to support our ultimate candidate. I’m excited about that,” said Brady.

In Delaware, the bulk of the local government services are provided at the county level, making races for the three county governments especially key in the state. The long primary season has bred some sharp intraparty fault lines in several key county races.

As a result, those groups recruited former JPMorgan employee and state employee Maggie Jones to challenge Meyer. Jones, a Democrat, is backed by the Trump-supporting, anti-Black Lives Matter Fraternal Order of Police Lodge 5, which represents police in the county.

In the state’s biggest city, Wilmington, 29-year-old LGBTQ activist Sarah McBride is running for an open Senate seat in the state’s First District. If elected, she would become the first openly transgender state senator in the nation and the first trans elected official in Delaware.

McBride first rose to prominence four years ago when she became the first openly trans person to address a major party convention at the 2016 Democratic National Convention.

“My interest in politics, and my interest in government, was always about making change, whether that was in elected positions or in working for campaigns,” McBride told Vox last year. “It wasn’t about the position or the title … I just wanted to get stuff done.”

Though she faces a primary challenger in Joseph McCole, who ran a primary campaign for the same seat last cycle, McBride is expected to win Tuesday and move on to face former Democrat and executive secretary of the Wilmington Housing Authority Board of Commissioners Steve Washington in November, where she will be the favorite. But Democratic voters in her district, including Chadderdon, feel that McBride would take the job seriously if she’s elected.

“On a day-to-day basis, when Sarah is talking to voters, when issues are being talked about, [her identity] just doesn’t come up,” said Chadderdon. “There are people who are excited about the historical nature of it, I don’t mean to downplay that. Just from talking to my neighbors, there’s an excitement that we have. We’re going to be really well-represented.”