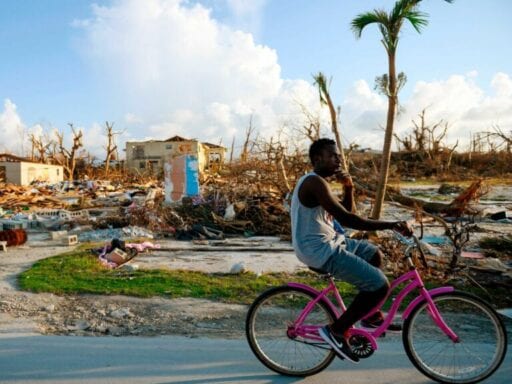 At least 50 are dead, thousands more are missing. The crisis in the Bahamas isn’t over.

Bodies are still being found in the Bahamas more than a week after Hurricane Dorian hit Grand Bahama Island and the Abaco Islands. The official death toll is 50, but that’s expected to rise. Responders are still sorting through the wreckage, particularly in poor Haitian immigrant communities in Grand Abaco that were almost completely leveled.

Hubert Minnis, the prime minister of the Bahamas, has said the natural disaster will leave “generational devastation.” It will take years to rebuild, and years, perhaps, to recover from the psychological toll of the destruction. It’s hard to know, exactly, how this disaster compares with other recent destructive Caribbean storms, like Hurricane Maria. The toll on the islands is still being assessed. But it’s looking real bad. On Wednesday, the Bahama government has told reporters 2,500 people have been registered as missing.

This story still isn’t over. Here’s what you need to know about Hurricane Dorian’s impact in the Bahamas.

The Bahamas are an archipelago of islands north of Cuba and east of Florida, home to around 400,000 people. Hurricane Dorian hit the northernmost islands — the Abaco Islands, and Grand Bahama Island, which had a population of around 70,000.

Hurricane Dorian first hit the Abaco Islands as a Category 5 storm with 185 mph winds. That ties it for the strongest landfall on record.

Meteorologists believe that winds might have even gusted up to 220 mph. That’s like a tornado, however this one was dozens of miles wide. Winds of that speed have the power to destroy whole houses, or at least rip off the roofs. In all, Dorian is tied for being the second-strongest hurricane (in terms of windspeed) ever recorded in the Atlantic.

Along with the wind came a flood. Hurricane Dorian pushed a 20-plus-foot wall of water onto the island, in the form of storm surge. More than 3 feet of rain fell. And much of the island was inundated. Many of the destroyed dwellings in Abaco Islands were simply constructed plywood homes. And they stood no chance against the storm.

2) Most of the deaths have been recorded in Abaco Islands

While Hurricane Dorian spent more time ravaging Grand Bahama, the Abaco Islands may be suffering worse consequences, particularly in the communities of poor Haitian immigrants (many of whom are undocumented) who live in shantytowns there. At least 35 of the 50 deaths occurred in Abaco, and rescue workers fear there are many more bodies to be found. “The public needs to prepare for unimaginable information about the death toll and the human suffering,” Duane Sands, the health minister of the Bahamas, told a local radio station.

The New York Times sent a reporter to the Abacos, and the reporter discovered corpses not yet accounted for. “There are still corpses pinned under fallen timber, wedged where the surging floodwaters deposited them,” the Times reported. “Many Abaconians suspect that some of the highest concentrations of fatalities will be in the sprawling, illegally constructed shantytowns of Marsh Harbour known as the Mudd and Pigeon Peas.”

According to the UN Office for the Coordination of Humanitarian Affairs, most of the buildings in Marsh Harbour have been destroyed.

There’s no access to clean water or sanitation in many communities, the UN reports. Grand Bahama is more developed, but there, many whole communities have been destroyed as well.

On top of the human tragedy, an environmental disaster might be left in the storm’s wake. Norwegian energy company Equinor reports oil has spilled out of one its storage facilities on Grand Bahama. It’s unclear if any of that oil has spilled into the sea, or is just confined to the land. One consequence of an oil spill, Earther reports, is that is can contaminate drinking water and make it toxic. If it gets into the ocean, it can harm coral and other wildlife as well. Equinor has vowed to clean up the spill, but it appears, the oil has already has made it 50 miles out into the sea.

Both Grand Bahama and the Abacos may need around 60,000 gallons of water delivered each day. In all, more than 60,000 people may need food and water assistance. It will take a massive effort to clean up the islands, and make these communities livable again.

3) Nearly all the residents of Grand Bahama and Abaco are displaced, and are struggling to find shelter

The islands where Dorian hit were home to around 70,000 people. It’s reported that as many people are in need of shelter; the homes that Dorian did not destroy have been made unlivable.

Now, those people need places to stay. As you might have heard, the US government denied entry for some Bahamian residents who didn’t have visas. As Vox’s Nicole Narea reports, the US could be doing a lot more to help bring in refugees. For example, “the Department of Homeland Security could also use its discretion to grant Bahamians parole, which gives them the ability to temporarily enter the US despite lacking the necessary documentation.”

Many more survivors — about 5,000 — have sought refuge in Nassau, the capital of the Bahamas on the island of New Providence. But shelters are reaching maximum capacity there, even as more survivors are arriving every day, the Miami Herald reports.

“[Nassau] is not built to handle this influx at this particular time,” a spokesman for the largest shelter told the Herald. “We don’t have enough schools to do it; our hospitals and healthcare system can’t handle it. Our goal has to be how we can help these people and then get these people back to their islands so they can rebuild it.”

Government agencies, including the US Coast Guard, NGOs, other relief organizations, and even the luxury cruise industry (which has had a rocky relationship with the Bahamas) are on the ground, responding to the disaster, helping people in need.

If you’re looking to donate, Charity Navigator has a list of many organizations raising money for the Bahamas, and rank them in terms of their effectiveness of channeling your money directly to the people in need.

If you’re looking to donate supplies, and want to know what’s needed, and where to drop it off, you can find that information here, on Bahamas.com/relief. And see below a list of the most-needed materials.

The mystery boy in the To All the Boys I’ve Loved Before post-credits scene, explained
Joe Biden chooses Kamala Harris as his running mate
Before-and-after aerial photos show how coronavirus is changing life in America
Why you’re seeing the 10-Year Challenge everywhere
The best case for and against a fracking ban
How a far-right politician’s scandal brought down Austria’s government