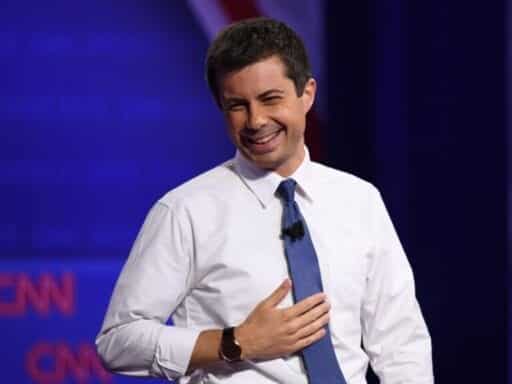 Pete Buttigieg had a strong night, but Joe Biden struggled once again.

Last month, when 10 Democratic presidential candidates took the stage to discuss LGBTQ rights, the actual issues were often overshadowed by the number of gaffes and awkward moments. Tuesday night’s LGBTQ town hall, hosted by the Human Rights Campaign and CNN in Los Angeles, was much more substantive.

Casting a shadow across the town hall’s discussions was the Supreme Court’s recent oral arguments over LGBTQ employment protections under Title VII of the Civil Rights Act, prompting plenty of discussion among the nine candidates in attendance on preventing discrimination against LGBTQ people. The night also brought the first-ever question for a presidential candidate about decriminalizing sex work, to which Sen. Amy Klobuchar declined to offer support.

Sen. Cory Booker once again had a strong night, showing comfort and ease discussing LGBTQ issues and specific policies to deal with difficulties stemming from intersecting identities like race and queerness. Both Sen. Elizabeth Warren and Beto O’Rourke were also confident in addressing the multi-layered protections needed for LGBTQ people. But it was South Bend, Indiana Mayor Pete Buttigieg who took the spotlight and finally seemed to come out of his shell, presenting himself as both vulnerable with his personal stories and humble to those in the community who don’t share his privilege.

The night also featured a consistent focus on HIV policy questions with nearly every candidate getting at least one, and many discussing how the issue disproportionately affects LGBTQ people of color. The federal ban on gay men giving blood also loomed large in the audience questions, and many parents of trans children weighed in, questioning how candidates plan to keep their kids safe at school amid rampant bullying.

As a bonus, no one seemed to flub up the LGBTQ acronym like many did at the last forum. Here are the four biggest winners and three losers from the night:

This was the Pete Buttigieg many LGBTQ people have been waiting for. He had a touching moment where he spoke at length about his reaction to realizing he was gay as a young child and choosing to live in the closet well into adulthood. He explained that he had been deployed to Afghanistan having never fallen in love and could have died without having had that experience — a worry that is near-universal for LGBTQ people who have yet to come out. He quipped that it was an election year when he finally decided to come out publicly, and then boasted that he won with 80% of the vote.

Earlier in the day, Buttigieg released an LGBTQ policy plan, promising support for passage of the Equality Act, a ban on conversion therapy, and the balancing of religious liberty with LGBTQ rights. During the evening, Buttigieg explained his underlying philosophy on religious freedom: “The right to religious freedom ends where religion is being used as an excuse to harm other people,” he said.

Responding to a question about the high rates of HIV among LGBTQ people of color, Buttigieg deftly pointed out the intersectional dynamics that affect marginalized people within the health care system and explained his specific policy solution. He once again drew on the theme of unity that pervades his campaign to explain how LGBTQ people can offer an example for a divided country. “Here we have the LGBTQ+ world that is everywhere,” he said. “We are in every state, every community… every family, and that means we can also have the power to build bridges.”

Buttigieg’s town hall was interrupted early on by transgender protesters chanting, “Trans people are dying!” “Do something!” And “trans lives matter!” While some in the audience joined in on the chants, others tried to shout them down. Moderator Anderson Cooper did well to diffuse the situation.

“Let me just point out, there is a long and proud tradition and history in the gay and lesbian and transgender community of protest, and we applaud them for their protest,” he said. “And they’re absolutely right to be angry and upset at the lack of attention, particularly in the media on the lives of transgender [people of color]…” His inclusive message set the tone for an evening that saw several protests and interruptions.

Cooper was notably open about his own gay identity throughout the evening, referring to the queer community as “us” and “we.” He related his own experience growing up gay in asking Buttigieg about his own life, and it led to arguably the night’s most beautiful personal moment, when Buttigieg shared his experience as a young boy realizing he was different.

During Beto O’Rourke’s allotted half-hour, a Black trans woman named Blossom C. Brown grabbed the microphone to protest the fact that not a single Black trans person had been allowed to ask a question. “I’m so tired,” she said before having a long back and forth with CNN host Don Lemon.

“That’s what anti-blackness looks like,” she said. “The erasure of black trans people.” Perhaps relatedly, earlier in the night, Black trans woman Ashlee Marie Preston tweeted that, at the last moment, CNN had scrapped her pre-planned question about the TSA’s harassment of trans people and she decided not to attend the event.

Protesters also briefly interrupted Buttigieg’s allotted time to protest violence against trans women of color. Then, after CNN host Nia-Malika Henderson mispronounced the name of singer/songwriter and Black trans woman Shea Diamond, who was asking a question of Julián Castro, Diamond said that her first name is pronounced Shee-uh. “It’s violence to misgender or to alter the name of a trans person, so let’s always get that right first,” she said before asking whether Black trans women will be advising Castro’s administration. He responded that they would have a voice if he’s elected.

No matter the eventual rulings in the SCOTUS cases, Congress has the power to amend Title VII to protect LGBTQ workers by passing the Equality Act. The bill would extend non-discrimination protections to LGBTQ people not just in employment, but in public accommodations, education, and housing. While most of the candidates expressed support for the Equality Act during their town hall (and each has expressed support for the bill in the past), Sen. Elizabeth Warren went one step further by explaining how she would reform the filibuster to overcome the objections of a potential Republican minority. It’s a crucial detail for the fate of the bill.

She also spoke at length about her own upbringing and how LGBTQ experiences were normalized in her household, reciting a poem about inclusion. Additionally, Warren expressed support for age-appropriate LGBTQ-inclusive sex education and said that while she’s open to classifying homophobic and transphobic acts of violence as hate crimes, she would also reform the Justice Department to prioritize bias crimes against the queer community.

Warren also released a comprehensive plan for LGBTQ equality on Thursday, which included many important details such as reforming the TSA screening process to stop the targeting of trans bodies.

But in one of the most memorable moments of the night, Warren laid a zinger on the audience. When asked what she would say to someone who approaches her on the campaign trail and believes that marriage is between one man and one woman, she replied, “Well, I’m going to assume it’s a guy who said that. And I’m going to say, ‘just marry one woman.’ I’m cool with that… assuming you can find one.” The line drew loud applause from the audience.

“I’m going to assume it’s a guy who said that, and I will say, then just marry one woman. … Assuming you can find one,” Warren said. #EqualityTownHall pic.twitter.com/RAuVqch7Ls

Not a single question was asked about policies specifically pertaining to lesbians. Meanwhile, bisexual and non-binary people got one question each.

Klobuchar was asked about non-binary gender markers on government identification, such as US passports, which she said she supports. None of the leading candidates were asked about non-binary gender markers, even though several, including Warren, also support it. Meanwhile, Castro was asked how bisexual people could better included in LGBTQ policies, to which he replied that bi voices would be included in his administration and stressed his policy to teach LGBTQ history in schools.

The town hall was historic in that it brought together candidates for a nationally televised discussion on LGBTQ rights — and yet lesbians were completely ignored. Every single candidate got a question about HIV transmission, which disproportionately affects gay and bisexual men and trans women, but organizers couldn’t find time for a single question on lesbian issues — like the unique combination of misogyny and homophobia that leads to male violence against lesbians, or intimate partner violence within queer women’s relationships. It was a glaring oversight and a missed opportunity.

When Sen. Kamala Harris took the stage, she immediately introduced herself and noted to CNN moderator Chris Cuomo that her pronouns are she/her/hers. It’s a common introduction within trans and progressive LGBTQ spaces and the senator was clearly trying to express that she had comfort with the practice. Cuomo, however, failed to take the cue, hesitating for a moment before replying, “mine too.”

KAMALA HARRIS: My pronouns are she, her and hers.

CHRIS CUOMO: Mine, too.

Mocking trans pronoun conventions has become all-too-common joke. It shows up regularly in second-rate comedy acts and attempts at conservative humor, but it has no place in serious settings like a presidential town hall. Cuomo later apologized on Twitter.

Former Vice President Joe Biden had a markedly improved performance from the last LGBTQ presidential forum, when he condescended to the woman who was interviewing him both on and off the stage. But on Thursday, he still often rambled through long stories about how he supported marriage equality within the Obama administration. By giving meandering answers, Biden managed to face less questions than the other candidates.

However, a reference to old gay bath houses drew a rebuke from critics on Twitter. “We talked about this in San Francisco, it was all about, you know gay bath houses. It’s all about round the clock sex, it’s all… c’mon man!” It was a bizarre line that had little to do with modern LGBTQ policy.

He also explained his vote for “Don’t Ask, Don’t Tell,” saying that he originally opposed the policy, but then voted for it as part of a larger military spending bill. Including controversial military policies in military spending bills is an old political trick that essentially dares your opponents to vote against the military to achieve your policy goals. It was a missed opportunity for Biden to highlight to a large audience that military spending bills could be a vehicle to rolling back the transgender military ban in Congress today, forcing Trump and the GOP to choose between their ban and military funding.

A rural New York county has adopted one of the most progressive trans prison policies in the US
Kevin Hart’s Oscars controversy feeds the stereotype of the black homophobe
Why it’s unlikely we’ll have a Covid-19 vaccine before Election Day
#EndSARS isn’t just about police brutality. It’s about the future of Nigeria.
Trump’s closing impeachment argument involved misrepresenting a tweet from the whistleblower’s lawye...
The US is worried about Iran retaliating with a cyberattack