4 winners and one loser from primary elections in Florida, Arizona, and Oklahoma 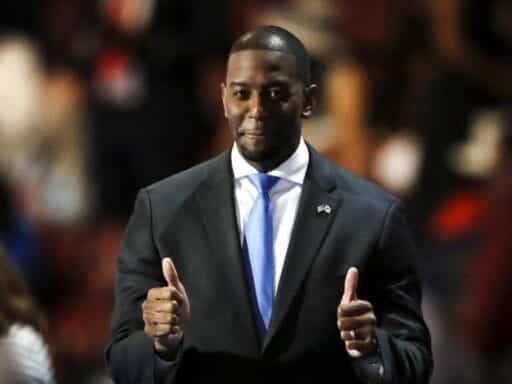 A shocking win, and some weird soccer.

Florida and Arizona are inextricably linked in Americans’ minds as the lands of baseball spring training and old retirees who hate welfare but depend for their standard of living on big government programs.

But in political terms, the two states have headed in opposite directions in the Trump era. Florida, a classic swing state for the past 20 years, not only landed in the Trump column in November 2016 but appears to have evolved further in a conservative direction since Election Day.

Arizona, by contrast, has traditionally been a considerably more conservative state, but Hillary Clinton outperformed past Democratic nominees there in 2016 even though she ultimately fell short. What’s more, given the personal conflicts between President Donald Trump and Sens. Jeff Flake and John McCain, the Arizona Republican Party has been in a state of turmoil, and Democrats believe there are reservoirs of Trump-skeptical voters there ready to be tapped.

The third state with primaries this Tuesday, Oklahoma, is nobody’s idea of a swing state. But the state’s incumbent governor is comically unpopular thanks to a series of budget crises, Democrats have picked up a number of state legislative seats here in special elections, and the party has high hopes of making further gains down ballot.

But in all these states in flux, a lot depends on the final selection of the candidates. Here’s what you need to know about who wins and who loses from the primary results.

In Tallahassee Mayor Andrew Gillum, Bernie Sanders and his national political organization Our Revolution had what was in many ways an unusually strong candidate.

While in many races, progressive groups have been forced to rely on political neophytes, in the Florida gubernatorial primary they had a solid, conventionally qualified nominee. That Gillum is also African American shouldn’t have hurt his odds, given the struggles Sanders had personally with black voters in the 2016 primary cycle.

The polls were wrong.

Gillum came from more-or-less out of nowhere to massively over-perform his poll numbers and snag the nomination based on soaring turnout. Most Democratic professionals seemed to regard Gillum as clearly the less electable choice. Billionaire Democratic donor Tom Steyer is a Gillum fan, however, and between that and being the Sanders wing of the party’s best shot at electing a governor, he should be able to run a well-resourced campaign. And with Democrats nervous that young people and African Americans may not turn out in the midterms, running a young African-American candidate may not be the worst idea in the world.

A few months ago it looked like a confluence of bad luck and internal party conflicts could leave the long-dominant Arizona Republican Party facing a disastrous situation in November.

Instead, a lot of breaks have gone their way. That started with McCain staying in office long enough to ensure that there was only one open Republican-held Senate seat to defend in November rather than two. It continued with good fortune in the primary to succeed Jeff Flake, which attracted two insurgent Republicans (Kelli Ward and Joe Arpaio) to split the anti-establishment vote and allow Rep. Martha McSally to secure the nomination.

This is the kind of race where one could easily have imagined Trump intervening — he’s a known Arpaio fan and McSally distanced herself from Trump in 2016 — but his aides convinced him to stay quiet and left Republicans with by far their strongest nominee. McSally currently represents a swing district in the House, and her biography as a pioneering woman fighter pilot is an ideal antidote to the anti-Trump backlash among white women that’s helped Democrats in many races.

Then in McSally’s hard-to-defend old House district, the Republican frontrunner looks to be a strong nominee in the form of Tucson Hispanic Chamber of Commerce chief Lea Marquez Peterson. Holding that seat is still an uphill battle, and public polling continues to give Rep. Kyrsten Sinema an edge. But Republicans have set themselves up with the best possible chance for success in an electoral cycle that once looked like it might go very wrong for them.

Oklahoma has long been one of the most conservative states in the nation, but its incumbent Republican governor is arguably the least popular governor in America thanks to years of budgetary crisis driven by tax cuts and mismanagement of unpredictable fossil fuel revenue.

Consequently, Democrats managed to flip four state legislative seats in special elections last year and for the first time in years have hopes of winning a statewide race. Further bolstering those odds are the fact that they have a strong candidate for governor in the form of former Attorney General Drew Edmondson.

Oklahoma Republicans, meanwhile, almost got a strong recruit of their own in former Oklahoma City Mayor Mick Cornett. Cornett ran the state’s largest city for 14 years and his record of proven electoral success in Democrats electoral base is exactly what the doctor ordered to keep the state in Republican hands.

But instead, the state’s Republican voters chose Tuesday night to nominate Kevin Stitt, a businessman who argued the state needs an outsider to clean up the mess and accused Cornett of running OKC as a “sanctuary city.” Polls show Edmondson narrowly ahead of Stitt in a head-to-head matchup, while he’s well behind Cornett.

A year ago, anyone would have said that Adam Putnam was the odds-on favorite to secure the Republican nomination to run for governor of Florida. A former House member well-liked by his colleagues in Washington, Putnam decamped for Tallahassee in 2010 and served two terms as the state’s agriculture commissioner. He had establishment support, solid conservative credentials, and in a state as big as Florida eight years of statewide exposure should have been a major advantage over his challenger, Rep. Ron DeSantis.

But DeSantis assiduously courted Trump, aggressively booking himself on Fox News as a pro-Trump talking head and impressing the White House.

The president, in turn, vocally endorsed DeSantis a few months ago and swiftly upended the race. Putnam’s poll numbers cratered, his establishment support vanished, and DeSantis ended up winning in a landslide.

Congressman Ron DeSantis is a brilliant young leader, Yale and then Harvard Law, who would make a GREAT Governor of Florida. He loves our Country and is a true FIGHTER!

There were no particularly noteworthy ideological disagreements between Putnam and DeSantis, the latter’s victory was really overwhelmingly based on the fact that Trump liked his TV hits. And the message to ambitious Republicans around the country is loud and clear — the way to get ahead in today’s GOP is to aggressively defend Trump’s antics in the never-ending media circus.

For whatever reason, while all this was playing out Trump was tweeting about the 2026 World Cup.

Add the 2026 World Cup to our long list of accomplishments!

This does not really have anything to do with Trump, but last year a joint bid by the United States, Canada, and Mexico was accepted as the winner for a soccer tournament that is going to take place after Trump leaves office. Amazing accomplishment!

Australia wants the US to investigate a police attack on 2 Australian reporters
Queen & Slim retells the Bonnie and Clyde myth as a story about blackness in America
Vox Sentences: State of Disunion
The number of migrants apprehended at the southern border has plummeted 75% since May
The best movies the 2020 Oscars didn’t nominate
America’s growing fake news problem, in one chart