4 young Indigenous people on what “home” looks like today 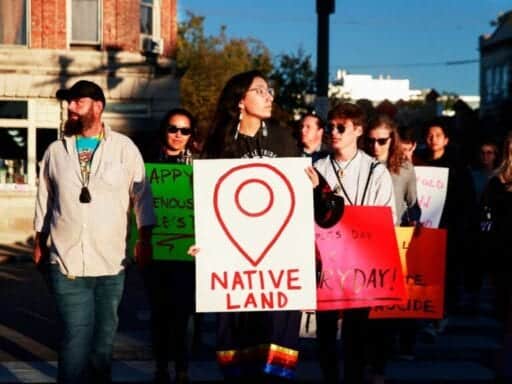 Living away from home doesn’t weaken your ties to the land or to your community.

Often, the stereotype of young Indigenous peoples is that we walk in two worlds: our Indigenous community and the America that surrounds us. But that notion implies we can somehow divorce ourselves, depending on the situation, from ourselves.

This is especially difficult given that our families, our livelihoods, and our homes have been subject to the whims of those who settled here and built America without our consent. Our existence has, in fact, depended on toggling this duality. We are less strangers in a strange land and rather strangers on our own land.

But in an era where questions of who is legitimate and who belongs in America are rampant, there is an opportunity to perhaps reconsider how we imagine America as a home for all of us. How do we build a future in which Indigenous peoples can be respected on all of the land that makes up this country? How do we imagine a future in which Indigenous communities are able to prosper on their own land?

Vox asked four young Indigenous people from across the country about how they think about their homes — and about the idea of home — in today’s America. Though their answers are broad, often incorporating challenges of race, geography, gender, and colonialism, they’re by no means exhaustive of the diversity of Indigenous experiences in this country.

The question of home for many Indigenous peoples is a difficult one. To ask where is home is to tell stories of hard times, dark days, and struggles. But it is also to tell stories of beauty, of love, and of hope — to revitalize, remake, and reimagine an Indigenous future that encapsulates the complexities of healing in the face of literal and cultural genocide. And that’s a home worth building toward.

At age 18, Sam Schimmel went directly from his family’s wooden cabin next to a marshy tundra outside Kenai, Alaska, to the manicured suburban landscapes of Stanford University in California. You could say it was a jolt to the system. “For the first couple of weeks when I woke up, I’d sit up and look outside to see if there were moose like back home,” Schimmel said.

Schimmel, now a sophomore, no longer wakes up looking for animals outside, though he still notes the differences between his home and school life. “In the summer, I run a small ecotourism business and I took my friends [from Stanford] out fishing,” he said. “What was hard for me was seeing these people uncomfortable in the spaces where I find myself at home.”

There are also the contrasting ways in which education and work are viewed in Alaska versus at school. “Since coming [to Stanford] … it feels like there’s a trend in thinking that things like working with your hands are not good,” Schimmel says. But in Kenai, he added, there’s a saying: “When your hands are busy, your mind is learning.”

It’s not that he wasn’t used to cultural shifts. Growing up between two Alaskan villages, Kenai and Gambell, and the city of Seattle, Schimmel often felt the differences, big and small, between these markedly different places. There is the obvious — like Schimmel not being able to hunt moose in Seattle — as well as more day-to-day interactions, like how he gives directions. “[In Kenai] directions are given in stories,” he says, “rather than take a left on 35th, take a left on 65th, and go down Ravenna, which is the way it’s done in Seattle.”

These stories are emblematic of the thousands of years spent developing a culture, a way of life, in a particular place, Schimmel says. It’s also what makes the threat of climate change reverberate so deeply in the community. “You can’t just pick up and leave,” he says. “Your ancestors lived in that place and gave you the stories and the tools to live there. They’re buried there.”

Schimmel isn’t the only young Indigenous person confronting how his home will become different with climate change. In Alaska and throughout the United States, Indigenous peoples are some of the first climate refugees. Even in places that are not yet uninhabitable, shifting weather patterns affect the migration of animals or the viability of certain crops, changing our homes forever.

Three times in our conversation, Schimmel brings up the word solastalgia. “It’s the idea of a place that you’ve lived in, and live in, changing around you. The feeling of being out of place,” he says. It is for that reason Schimmel continues to fight on behalf of his home: “Kenai, it’s family.”

For Joaquin Gallegos, 29, the question of where home is is relatively simple. It’s where his ancestors and his family are from — the Jicarilla Apache Nation and Pueblo of Santa Ana, in what is today northern New Mexico. This surprises me, as Gallegos was born in Denver, raised across New Mexico, Colorado, and Montana, and now lives in Minnesota. “I think there can be a chasm of belonging to a place [where] you may not have been born,” he tells me.

Working as a legislative attorney for the Non-Removable Mille Lacs Band of Ojibwe in east-central Minnesota can make it difficult for Gallegos to get back home, yet he makes the journey every few months. “Advancing Indian needs and priorities can be energy-depleting, but going home is the antidote because seeing the places and people I work to help secure is recharging,” he says.

Gallegos’s story is not unique in this regard. Today, nearly seven in 10 American Indian/Alaska Native peoples live in metropolitan areas. For many — like Gallegos’s immediate family — the decision to move around was primarily economic, in search of some level of financial security. But Gallegos mentions that historically, his family’s move away from home was a result of American Indian Urban Relocation, a federal government-sponsored program to remove Indigenous peoples from their homelands and terminate their tribal status between roughly 1950 and 1980.

Yet Gallegos considers himself lucky. “My Indian tribes are unique because their current reservations are within their original territories,” he says. “Since both tribes were forcibly confined compared to relocated, our historical homes were not all lost.”

At the same time, Gallegos is quick to note that this does not mean going home has always been easy. “Today’s systemic wealth depletion, substance abuse, and environmental distress are forms of violence that come from colonialism,” he says.

For all of these challenges, home will always be home. It’s where we can be our best, in a natural environment and in a community that humanizes us. “[At home,] I realize my full potential because I see resilience and power to achieve against the odds,” Gallegos says. “It’s a religious experience to grow in the natural spaces that we have protected since time immemorial.”

Amber Richardson, 29, is from Hollister, North Carolina — a small, rural, close-knit community of primarily Haliwa-Saponi peoples. In talking to her, it becomes clear that she loves her home. It’s also clear that its history — as well as the history of Indigenous people living in the South — are complex. “We’re a collection of Native peoples who settled in the same place, and out of survival … all figured out how to make it work,” she says.

Today, Richardson lives in Washington, DC, where she works as a communications strategist. Though she notes that her upbringing was primarily based on kinship ties, her experiences since leaving Hollister have left scars around her Indigenous identity. “Phenotypically, I’m often told that I don’t look like someone’s stereotypical idea of what a Native person looks like,” she says.

There’s also the fact that although Haliwa-Saponi have existed in what is now North Carolina since time immemorial, they lack federal recognition, a process by which certain Indigenous communities are legitimized in the eyes of the U.S. government. This weighed heavily on Richardson when she moved to DC after college, and other Indigenous people would question her about it. “I grew up with such a rich, vibrant Native community that I belong to … and then to have someone say, ‘Oh, well, are you recognized?’ … By who? By my people? Yes!” she says.

Indigenous communities in the American South are often attacked from both sides — facing questions of legitimacy from Indigenous peoples in other parts of the country, all the while pushing back against typical settler colonial infringements upon their sovereignty. “This [legacy] is a consequence of something that was never set up to support us,” she says. “It’s a consequence of something that was meant to cause infighting and cause us to crumble.”

Even with the long tail of colonialism, Richardson ultimately tells a story of survivance — for her and for her people. “We’re trying to tell a story of what it means to establish this distinct Native identity in the midst of all of this, and grappling with not how to right a wrong, but how we move forward today,” she says.

Kacey Qunmiġu Hopson, 25, says that to ask about home is to ask two different questions: Where do you live, and where are you from? “The North Slope of Alaska is my homeland, but I make my home in Anchorage,” she says. “It’s where I feel most connected to community right now.”

For Hopson, this duality is about building a home in a current place while also reconnecting to an ancestral community. In Anchorage, where only 8% of the population is American Indian/Alaska Native, she grew up without many role models who looked like her. “That was a real absence in my life,” she says. “All I really saw was the pain and trauma in my own family.”

Witnessing, carrying, and surviving generations of abuse is common for young Indigenous peoples across the world, and Alaska Native peoples in particular. Many Alaska Native children were not only sent to boarding schools where physical and sexual abuse was rampant, but Alaska Native communities also bore the brunt of the Catholic Church’s neglect in sending serial sexual abusers to be priests in Alaska.

“[Safety], with regards to home, is definitely a challenge,” Qunmiġu Hopson says.

When we talk about missing and murdered Indigenous women in Alaska, she points to a part of the conversation that’s often overlooked: “The roots of a lot of this violence against Indigenous women and communities, the discourse doesn’t seem to acknowledge that this is the legacy of colonization.”

Hopson is hopeful she can provide a better future for Indigenous generations to come through her current work as an Indigenous knowledge advocate at First Alaskans Institute in Anchorage. There, she advocates for Alaska Native ways of life and self-determination by hosting dialogues on racial equity throughout the state, as well as educating government institutions on Indigenous sovereignty. “I want our people to know who they are and love who they are,” she says. “And that entails our systems reckoning with the history of colonization.”

Rory Taylor is a Ckiri/Chahta journalist covering Indigenous politics, policy, and the intersection of race, culture, and society in America. Originally from the Los Angeles area, he currently lives on the territory of Ngāti Whātua Orākei in Tāmaki Makaurau and is pursuing a master’s degree in Indigenous studies at Te Whare Wānanga o Tāmaki Makaurau.

Who will win all of Tuesday’s primaries, according to the polls
My year of free mattresses
John Delaney has a plan for universal health care — but don’t call it “Medicare-for-all”
Feds flew an unarmed Predator drone over Minneapolis protests to provide “situational awareness”
Brett Kavanaugh likely gives the Supreme Court the votes to overturn Roe. Here’s how they’d do it.
Vox Sentences: Gun control in the crosshairs