400 people got a Domino’s tattoo for free pizza. Why do brands promote these body-altering stunts? 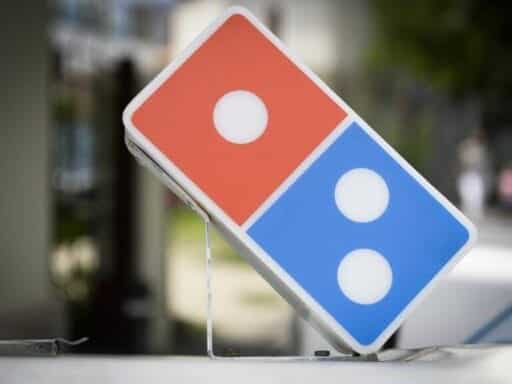 Companies increasingly want both their employees and customers to get logo tattoos.

People get tattoos for any number of reasons. For almost 400 people recently, that reason was free pizza for life.

In Russia, Domino’s Pizza offered customers “100 pizzas a year for 100 years” for free if they tattooed the company’s logo on themselves and then shared the image to social media with the hashtag #DominosForever, the Wall Street Journal reports. The promotion was supposed to run for two months, but the pizza chain had to discontinue it after four days because so many people were willing to ink up. In the end, 381 people qualified for the deal.

The reason many of them chose to get red-and-blue logos tattooed prominently on themselves was not solely because of an overwhelming loyalty to MeatZZas™. Per the WSJ, “A stagnant economy has left average disposable incomes stuck around $500 a month” in Russia. Several people whom the paper interviewed got the tattoos because they needed the free food.

People occasionally pay to ink things like the Harley-Davidson wings and Apple apples with no financial incentive from the brands whatsoever; they truly just feel an affinity. But offering free stuff in exchange for customers getting tattoos of a company’s logo is a different dynamic. There’s also been a trend of companies not-so-subtly encouraging employees to get tattoos of their employers’ logo. It might seem funny at first glance, but it’s actually a pretty bleak statement on what brands are willing to do for some fleeting social media marketing buzz and the economic reasons people comply.

Selling your skin for free stuff

While Domino’s is one of the more high-profile global brands to pull this stunt, there’s a storied history of restaurants offering free food in exchange for walking human signage — or in the case of Melt, an Ohio-based grilled cheese chain, a more modest 25 percent off for life. According to a gallery on the chain’s website, at least 900 people have tatted the brand’s cheesy bread-and-crossbones logo on themselves for this deal. The sandwiches must be incredible, because the “Kindergarten,” a pretty classic-looking grilled cheese, goes for $7, which means you save about $1.25.

In 1999, San Francisco’s Casa Sanchez offered free lunch for life for people who got tattoos of the Mexican restaurant’s logo. They had to cap it at 50 people per day because so many people took them up on it. The restaurant reinstituted the policy in 2010, per the WSJ. As Domino’s has shown, people don’t balk at the concept quite as much as brands expect them to.

In 2016, CNBC reported on an Australian restaurant called Cafe 51 offering free burgers for life in exchange for a tattoo of one of its burgers drawn to scale. At the time, one of the burgers featured four beef patties and four pieces of fried chicken, so it was not a minimalist design. Apparently 3,500 people applied for the “honor,” and 10 were chosen for the actual tattoos. (The chain is now called Burger Love, so it’s a good thing the logo wasn’t the tattoo.)

In the early 2000s, during the heyday of the dot-com boom, there was a particularly devastating series of news stories about people auctioning off their faces and other parts of their bodies to brands for tattoos. In 2005, a woman got the logo of the gambling site GoldenPalace.com tattooed across her forehead for $10,000; the tattoo parlor reportedly spent seven hours trying to talk her out of it. A BuzzFeed report in 2012 sums up this dystopian time, interviewing several people who still had the tattoos. Most of the brands didn’t exist at that point anymore, and many of the people who had the tattoos were financially worse off.

These strategies do sometimes backfire, as was the case with publisher Hachette, which tried to run a promotion in Australia for the fourth book in the Girl With the Dragon Tattoo series, according to a Verge report. It wanted to find a woman who would be willing to get a large dragon on her back, even going so far as to call it “tatvertising.” The company had to cancel the promotion after some online backlash questioning the ethics.

When employees ink up for their companies

Then there’s Anytime Fitness, which has been successful in getting both members and its employees to have the chain’s purple “running man” logo tattooed. According to a 2017 post on the company’s blog, more than 4,000 “owners, staff, and members” have the logo tattoos. Anyone who does it gets … the cost of the tattoo reimbursed by the company.

The WSJ, which has truly been at the forefront of reporting on this tattoo-brand marketing economy, reported in March that an Anytime employee got a company logo tattoo but hid it from his wife for three days. This delightful exchange pretty much says it all:

He recalled his wife was shocked but decided it was “kind of sexy.” Ms. Daly has a different recollection. “No, I would not describe it as cool or sexy,” she said, calling her husband a “knucklehead.”

Nike reportedly has a secret society of EKINs, (uh, that is Nike spelled backward), a group of people who are trained guerrilla marketers for the brand. In 1994, the New York Times first reported that they all had Nike swooshes tattooed on their legs, a practice that Complex confirmed was still happening in an anonymous interview with an EKIN in 2013. “… yes I do have a Swoosh tattoo. You aren’t held at gunpoint to get a Swoosh tattoo, but a lot of people get it,” the EKIN supposedly said.

Some people get tattoos because they feel a true kinship with their employers, as one 24-year-old Walmart employee in the Journal story attests. Then there’s the question of what happens when you no longer work for that company. Former New York Times editor-in-chief Jill Abramson got the paper’s “T” logo tattooed right below a Harvard “H” two months before she got fired from her job there. “I love the Times more than I loved working there,” she told the WSJ.

In an economy where people don’t keep their jobs for 30 years anymore and companies like Amazon routinely pay workers subpar wages, it’s easy to be uneasy about brands stepping in to present themselves as “families” to its workers. Pressuring people to essentially permanently brand themselves (in both senses of the term), no matter how lighthearted it seems at the time, is almost cultlike.

Why people tattoo themselves for free stuff

“When people are offered something for free, they have this extreme positive reaction that clouds their judgment. They are ready to forgo options that are, rationally speaking, better for them,” a marketing professional told the Pacific Standard in 2015. The case of tattooing yourself for free burritos is an extreme instance of that. But for many of the Muscovites who wanted free pizza, it was almost an act of desperation. Paying the equivalent of $30 for a tattoo in exchange for a lifetime of worry-free eating was worth it to them, which is a disturbing commentary on both Russian economics and the fact that a brand was so flippant in its marketing that it didn’t realize that could be the case.

Some of these situations are fuzzier. People do have legitimate bonds with brands. In 2014, HBO ran a promotion with a small tattoo parlor near Comic-Con in San Diego, paying for 111 fans to get HBO-approved Game of Thrones tattoos. That is truly a cohort with a rabid fan base who didn’t necessarily consider it a promotion — they likely wanted GoT tattoos anyway.

And it could be similar for Anytime Fitness: On the brand’s blog, many members discuss how the logo has meaning for them, as a representation on a journey to health and as a symbol of their membership in a community. “Anytime Fitness Concord really is a family. My tattoo represents this family, and a decision to live my life to the fullest,” one wrote.

But the brand is probably getting a lot more out of it than you are. Anytime has received features in multiple national publications for its tattooing stunts. What happens when you quit that job, or don’t like pizza anymore, or gain all the weight back, and that tattoo is still there, seemingly mocking you?

On a final practical note: Tattoo removal costs thousands of dollars and is really painful. And unlike Domino’s 30-minute delivery guarantee policy, lasers are not guaranteed to remove a tattoo completely.

Why Georgia’s reopening hasn’t led to a surge in coronavirus cases (so far)
House Republicans are suddenly eager to vote on immigration — as long as it’s the “Abolish ICE” bill
Remember Brexit? It’s still not over.
Daredevil season 3 is a return to what made the show so good in season 1
Area 51 and aliens: the myth, the meme, and the strange reality, explained
California will have its first Latino senator