5 great movies from TIFF that flew under the radar 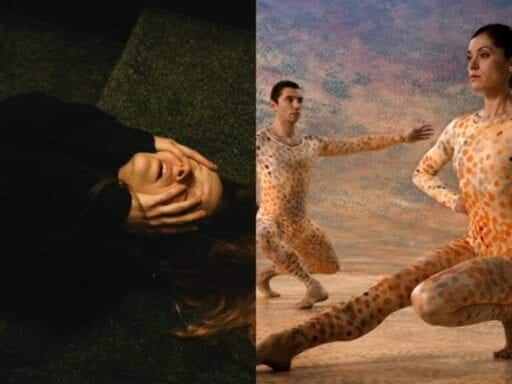 Share
Loading...
Saint Maud and Cunningham were among this year’s best under-the-radar films at the Toronto International Film Festival. | Courtesy of TIFF

Not every movie at the Toronto International Film Festival is big and buzzy. Here are five you’ll want to know about.

Plenty of buzzy films premiere at the Toronto International Film Festival — this year, that included Joker, Jojo Rabbit, Knives Out, and A Beautiful Day in the Neighborhood. But the festival programs hundreds of movies, which means that some noteworthy ones can fly beneath the radar.

It’s impossible to see everything at the festival, and many deserving films are still waiting for distribution and release. But here are five movies we saw at TIFF this year that are worth looking for in the months ahead: two documentaries, one period comedy, one drama, and a chilling religious horror film.

Bad Education was one of the surprise delights of TIFF, a tale of intrigue and larceny in the most drab of locations: a Long Island public school district. Based on a true story from the early aughts and directed by Cory Finley (Thoroughbreds), the film stars Hugh Jackman as Frank Tassone, superintendent of the fourth-best school district in the state of New York. Tassone soon finds himself at the center of a massive fraud investigation thanks in part to reporting by a student journalist (Geraldine Viswanathan).

Bad Education expertly traces the effects of pressure placed on administrators and faculty. And because a complex set of factors (along with some good old-fashioned theft) lead to scandals like the one in Bad Education, this story is unlikely to be the last of its kind.

How to watch it: Bad Education was acquired by HBO and will premiere in 2020.

In 2015, a fire in a Bucharest nightclub killed 27 people — and in the weeks that followed, 37 more, due to shockingly inadequate hospital conditions that led to infections in the survivors. Collective (named in part for the nightclub) is an observational documentary that traces the conditions and exposes huge deficiencies in the Romanian health care system as a whole. Documentarian Alexander Nanau captures the lies told by government leaders during the fallout from the fire; eventually their actions led to the government’s downfall, though that was short-lived.

Collective plays out like a chilling, slow-moving trainwreck, a study in how a government gaslights its citizens into accepting conditions that would be avoidable, but for greed and corruption. In its second half, the film focuses on a new, young minister of health, Vlad Voiculescu, who’s trying to effect change — and it shows the uphill battle and eventual fruitlessness of that fight.

How to watch it: Collective is awaiting distribution in North America.

Cunningham isn’t the first dance documentary to be shot in 3D (one significant predecessor is Wim Wenders’s 2011 documentary Pina). But it’s remarkable all the same, showing the great art that the melding of of 3D filmmaking and dance can produce. Exploring the legacy of groundbreaking modernist choreographer Merce Cunningham, Alla Kovgan’s Cunningham uses on-location recreations of some of his landmark works, using the last generation of dancers who worked with Cunningham directly in his company.

The film is less of a biography of Cunningham and more an interrogation of how a visionary creator’s work is extended and reinterpreted. Archival footage of Cunningham and some of his closest collaborators (including John Cage and Robert Rauschenberg) mix with the recreations for an immersive, illuminating experience.

How to watch it: Cunningham opens in select theaters on December 13.

The Personal History of David Copperfield

A new film from Armando Iannucci (Veep, In the Loop) is always an event; his specialty is satirical looks at the absurd ways in which power functions in politics. That’s present in The Personal History of David Copperfield, but unlike his 2017 TIFF premiere The Death of Stalin, Copperfield is a gentler, less biting period piece.

It’s a more faithful adaptation of Charles Dickens’s novel, starring Dev Patel as David Copperfield alongside a stacked cast, which includes Tilda Swinton, Hugh Laurie, Ben Whishaw, Gwendoline Christie, Benedict Wong, and Peter Capaldi (as a pitch-perfect Mr. Micawber, the role he seems born to play). And while it still retains a plentiful sense of the ludicrous in its exploration of class and social norms, the film is affectionate in the end.

How to watch it: The Personal History of David Copperfield will be distributed by Disney. It is awaiting a release date.

Stories of demons, devils, and religious dread have long made for great horror films, and Saint Maud, from first-time director Rose Glass, follows in those well-trodden footsteps. It’s the tale of Maud (Morfydd Clark), a home health aide in a small British seaside town who becomes obsessed with the spiritual state of her patient, a former dancer named Amanda (Jennifer Ehle), whose life seems degenerate to Maud. But of course, Maud is harboring demons of her own.

Saint Maud is the kind of low-budget horror film that sneaks up on you, as much a character study as a portrait of twisted belief and obsession. For some, the comfort that faith brings can become something much, much darker.

How to watch it: Saint Maud is awaiting release.

I voted in South Korea’s elections. This is what democracy should look like in a pandemic.
Al Gross is hoping to ride Alaska’s independent streak to the Senate
Vox Sentences: Moon 2024
The race to unseat Wisconsin Gov. Scott Walker, Democrats’ white whale
Qdoba’s Impossible Meat tacos and bowls are 100% meatless
The Good Place sets the stage for season 3’s endgame in “The Book of Dougs”