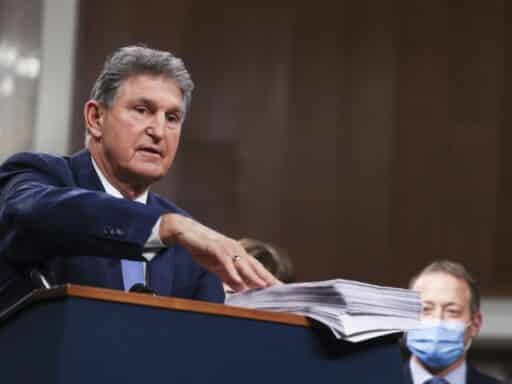 Senate centrists aren’t going to kill the filibuster. But they might still make a deal to weaken it.

Now that the Democrats have the Senate, it’s time to get real about eliminating the filibuster — the Senate procedure that creates a de facto 60-vote threshold for most controversial legislation.

The problem is that there are not the needed 50 Democratic senators in favor of abolishing it. The only way any change will happen is if the squeeze is put on resisting senators —making it clear that it is their fault, in concert with Republican senators, that popular parts of the Democratic agenda are blocked. But even with pressure, these Senate centrists aren’t going to vote to “eliminate the filibuster.”

The terrible effect of the filibuster was never more apparent to me than when I was the director of economic policy planning on the preelection Clinton-Kaine transition team. As we strategized for how we would pursue Hillary Clinton’s policy agenda, the 60 votes needed to pass most legislation in the Senate was like a brick wall staring us in the face. The Biden team is now facing the same wall.

The most intransigent resistance is likely to come from centrist senators who don’t want to pass legislation that is to the left of their, or their constituents’, preferences and don’t want to be key votes on controversial legislation without the cover of bipartisanship. I have my doubts about this view: Are centrists worse off politically if they take meaningful votes on progressive legislation, or if they are seen as part of a Democratic Congress that fails to delivers on its promises? Nevertheless, it’s going to take a compromise to get them on board.

Many of these senators have voted to weaken the filibuster in the case of presidential nominations, so making adjustments without scrapping the rule entirely is not new to them. Here are some possibilities.

The current filibuster rules don’t require senators to hold the floor with uninterrupted oratory — the popular idea of a filibuster — to block action. If senators had to keep speaking to forestall a vote, gridlocking the Senate, it would make filibusters more painful and hence, presumably, less frequent. The bills that centrist Democratic senators most fear are those that Republicans most strongly oppose and would probably be blocked. Other needed legislation would, however, have a better chance.

Flip the way the Senate does business: Instead of requiring 60 votes to proceed on a bill, require 41 (or more) votes to block it. A bill could advance with a simple majority unless 41 senators were at hand to vote “no.” This would require 41 opponents to stay close to the Senate floor lest the bill slip through when their numbers are below the blocking threshold.

3) More exceptions to the filibuster rule

There are currently exceptions to the 60-vote requirement for budget reconciliation and, as of recently, presidential nominations. More exceptions could be added. The benefits of this approach, and the level of support for it, would depend on the breadth of the exceptions. Exceptions that have been suggested include votes to raise the debt limit, expand voting rights (HR1, for example) or fund the federal government.

This approach could also be tailored to deal with very specific concerns of senators; there could be an exception, for example, for “legislation that expands access to health care.” Another possibility would be to allow majority votes on statehood to make it possible for the District of Columbia and Puerto Rico to gain representation. Ad-hoc exceptions are an inelegant approach, but might be necessary.

4) Overcome the filibuster with a vote in two Congresses

Allow passage of bills that can currently be filibustered when a simple majority supports the legislation in two successive Congresses, with an intervening election. A number of states similarly require votes in successive legislative sessions for advancing state constitutional amendments. This approach would allow the will of the Senate majority to be expressed, ending the ability of a minority to perpetually block legislation, but with an opportunity for opponents to make their case, and voters to intervene.

This approach would also create an incentive to pass compromise legislation without waiting for the second vote: Each side has something to gain by coming to an agreement that provides the 60 votes needed for one-session passage in exchange for changes in the legislation. It would still be very hard to pass legislation, but a persistent, election-tested, majority could accomplish its goals, even in the face of a committed opposition.

The number of votes needed to break a filibuster was previously reduced from 66 votes to 60. It could be further reduced. If one thinks that there are Republican senators who might break from their party to support some Democratic priorities, reducing the threshold to 52 or 53 votes would address the concern of passing legislation with no Republican support, while not requiring more than the couple of centrist Republicans to join.

There are also other opponents who aren’t necessarily centrist but are still skeptical of getting rid of the filibuster. Some senators, steeped in Senate tradition, believe a process slowed by the filibuster is the best path to good lawmaking. They might be assuaged by the “ratchet” plan, proposed by former Sen. Harkin, which allows a simple majority to pass legislation with a longer process to get there.

Others, such as Sen. Bernie Sanders, have expressed concern that when the Republicans have control, they, too. would find their agenda easier to pass if the filibuster were eliminated. The counterargument is that Democrats should have confidence that if both parties could pass their agendas, revealing their impact on the public, that Democrats would win more elections. Still, there is an answer to such a concern: allowing the filibuster only by senators who represent a majority of the population.

There are a number of reasons Democratic centrists might be willing to support one of these compromises. The more modest measures would be a useful shot across the bow of Republicans to pressure them to engage in the bipartisan compromises the centrists so desire: There is an implicit threat to the Republicans that, if they don’t play, the centrists will further weaken, or eliminate, the filibuster.

Reluctant Democratic senators might also start to feel pressure as the calls to eliminate the filibuster gain volume. Although they are from moderate states, they count on progressive votes to win elections, and resisting any changes in the filibuster might prove politically untenable.

The bottom line is that we need to have a Senate that can pass a full range of important legislation. None of the options described here would eliminate the filibuster, but they would all make it easier to pass legislation favored by the party that won the presidency, won the House and whose senators represent states with many more people than their Republican counterparts — which is what we need for the country to truly move forward.

Michael Ettlinger is the founding director of the Carsey School of Public Policy at the University of New Hampshire.