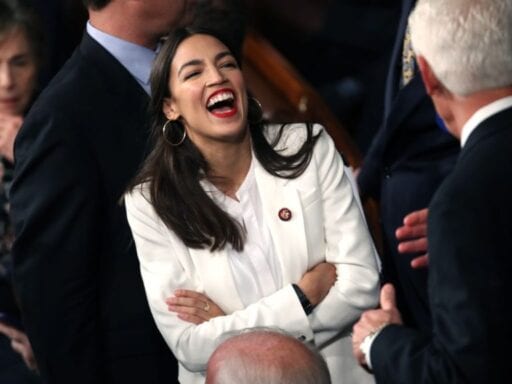 “If that’s what radical means, call me a radical.”

Rep. Alexandria Ocasio-Cortez (D-NY) is fine with being called a “radical,” believes President Donald Trump is racist, and is okay with sometimes fudging facts as long as she is “morally right.”

Those were among the key moments from the new Congress member’s interview with Anderson Cooper aired on CBS’s 60 Minutes on Sunday.

Ocasio-Cortez, 29, is the most buzzed-about first-term member of the House of Representatives. The self-proclaimed democratic socialist has become a frequent target of conservatives, who criticize everything from her upbringing to her outfits to her bank account. She has generated heaps of media attention with her efforts to push the Democratic Party to the left, including with her Green New Deal proposal. Just last week, she surpassed House Speaker Nancy Pelosi in Twitter followers.

Ocasio-Cortez has ignited more chatter with her 60 Minutes sit-down, in which she did not hold back on a number of fronts.

Ocasio-Cortez told Cooper she believes there is “no question” that Trump is a racist when asked.

“The president certainly didn’t invent racism,” she said. “But he’s also given a voice to it and expanded it and created a platform for those things.”

Alexandria Ocasio-Cortez says the president is a racist, “no question.” The White House told 60 Minutes that President Trump “has repeatedly condemned racism and bigotry in all forms.” https://t.co/Wulr0l7fFK pic.twitter.com/o6pCTPmabt

When Cooper asked her to explain her certainty that the president is racist, she said it’s in the “words he uses, which are historic dog whistles of white supremacy.” She pointed specifically to Trump’s equivocal reaction to racist violence in Charlottesville, Virginia, in August 2017, where he was hesitant to condemn the events that happened there and declared that there were “very fine people on both sides.”

“When you look at how he reacted to the Charlottesville incident, where neo-Nazis murdered a woman, versus how he manufactures crises like immigrants seeking legal refuge on our borders, it’s — it’s night and day,” Ocasio-Cortez said, referring to Heather Heyer, a counterprotester who was killed in Charlottesville.

Ocasio-Cortez is fine being called a “radical”

Ocasio-Cortez is a proponent of an ambitious progressive agenda, including universal health care, tuition-free public college, and a Green New Deal to combat climate change.

Cooper noted that enacting what the New York representative is proposing is a tall order and might be considered a “radical agenda.” She responded that she’s fine with that.

“Do you call yourself a radical?” Cooper asked.

“Yeah. You know, if that’s what radical means, call me a radical,” Ocasio-Cortez responded.

70% tax rates on the very rich would help pay for the #GreenNewDeal to combat climate change, @AOC told Anderson Cooper: “Only radicals have changed this country.” https://t.co/MWDhzh4hTr pic.twitter.com/NTuaJ38cbC

She’s not worried about how to pay for things

Beyond the ambition of Ocasio-Cortez’s platform, it’s also expensive.

Her response: Republicans didn’t worry about paying for their $1.5 trillion tax cut bill, so why should she be forced to do the math on every single thing she puts forward?

For the funds for the Green New Deal, Ocasio-Cortez suggested a top marginal income tax rate of as high as 70 percent. The proposal has roiled conservatives, but as Vox’s Matt Yglesias explained last week, it makes sense:

Seventy percent is a lot higher than the current rate and will doubtless fuel the conservative effort to paint AOC as a know-nothing, but the number is in line with one prominent strain of recent economics research and is at least moderately well supported by America’s historical experience.

Ocasio-Cortez, like any politician, has at times overstated or misstated some facts and figures. For example, she raised eyebrows with a tweet in December declaring that $21 trillion in “Pentagon accounting errors” could pay for a major chunk of Medicare for All expenses. The tweet earned her four Pinocchios from the Washington Post because it wasn’t true.

$21 TRILLION of Pentagon financial transactions “could not be traced, documented, or explained.”

$21T in Pentagon accounting errors. Medicare for All costs ~$32T.

That means 66% of Medicare for All could have been funded already by the Pentagon.

And that’s before our premiums. https://t.co/soT6GSmDSG

“If people want to really blow up one figure here or one word there, I would argue that they’re missing the forest through the trees,” Ocasio-Cortez said when asked about the matter on 60 Minutes. “I think that there’s a lot of people more concerned about being precisely, factually, and semantically correct than about being morally right.”

Ocasio-Cortez, because of her age and gender, often seems to be held to a different standard than other politicians. She clarified to Cooper that being factually correct is “absolutely important” and said that when she makes a mistake she admits it and restates her point.

“It’s not the same thing as … the president lying about immigrants,” she said.

“There’s a lot of people more concerned about being precisely, factually, and semantically correct than about being morally right,” @AOC says in response to criticism that she’s made factual errors. https://t.co/sKf3sHl9F6 pic.twitter.com/xKc2eB7GEk

Ocasio-Cortez is … sort of sorry to Donald Trump Jr.

Ocasio-Cortez responded with a reminder of special counsel Robert Mueller’s investigation, saying that Trump Jr. “has a habit of posting nonsense about me whenever the Mueller investigation heats up” and that it was unwise to “troll a member of a body that will have subpoena power.”

I have noticed that Junior here has a habit of posting nonsense about me whenever the Mueller investigation heats up.

Please, keep it coming Jr – it’s definitely a “very, very large brain” idea to troll a member of a body that will have subpoena power in a month.

Cooper asked Ocasio-Cortez whether that was an abuse of power on her part, as some onlookers have suggested. She responded, laughing, “Well, if he felt genuinely threatened by me, I apologize, but I think that, frankly, it’s legal advice that any person would give.”

“If he felt genuinely threatened by me, I apologize.” @AOC discusses her Twitter dispute with Donald Trump Jr. https://t.co/HUub7Y0xF6 pic.twitter.com/8ih11Wa0uI