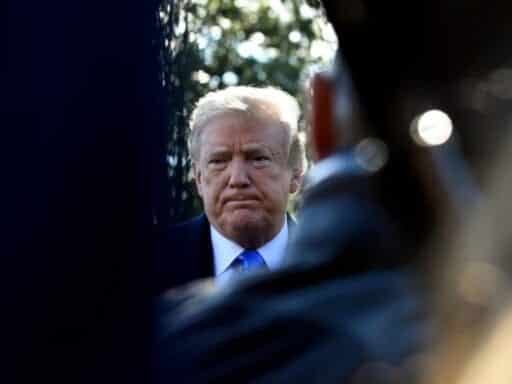 “I’m president, and you’re not,” President Donald Trump told CBS’s Lesley Stahl during an interview aired on 60 Minutes on Sunday — a bizarre moment in a wide-ranging and often combative interview, taped Thursday, in which Stahl pushed the president on his beliefs on climate change, North Korea, and more.

The last time Trump appeared on the program, he had just been elected to the presidency in 2016. Back then, he seemed more apprehensive about the office he had just been elected to and unsure about what shape his presidency might take. (He told Stahl back then that he was going to “do very restrained” tweeting while in the White House.) Now, however, he said he’s getting into the groove.

“Now I very much feel like POTUS,” Trump told Stahl this time around. “I do.”

The interview covered a lot of ground, ranging from the anonymous New York Times op-ed written by someone in the administration — which Trump called “fake news” — to NAFTA, which Trump said it was a “mistake” to not have terminated sooner.

Here are five key moments from the sit-down.

Trump told Stahl he doesn’t think climate change is a “hoax,” but he’s still skeptical that it’s not going to just change back. Nor is he sure it’s actually man-made.

“I think something’s happening. Something’s changing and it’ll change back again. I don’t think it’s a hoax. I think there’s probably a difference,” Trump said. “But I don’t know that it’s man-made.”

Trump suggested addressing climate change would be too financially costly and said some nebulous “they” say hurricanes have been worse than, for example, the recent Hurricane Michael. The exchange:

Stahl: Yeah, but what about the scientists who say it’s worse than ever?

Trump: You’d have to show me the scientists because they have a very big political agenda, Lesley.

The president raised eyebrows last month when at a rally he said he “fell in love” with North Korean leader Kim Jong Un over denuclearization letters. When Stahl pointed out that Kim is a brutal dictator who had his half-brother assassinated, conducts public executions, and oversees an oppressive regime, Trump tried to pretend like his love comments were just a “figure of speech.”

“I know all these things. I mean, I’m not a baby,” Trump said of Stahl’s listing of Kim’s record.

“But you love him,” Stahl said. When Trump said it was a figure of speech, she retorted, “No, it’s like an embrace.”

Trump is often far more deferential to Russian President Vladimir Putin than to other world leaders. The interview aired on Sunday was no different.

When asked by Stahl whether he agrees that Putin has been involved in assassinations, Trump shrugged, “Probably he is, yeah. Probably.”

And when asked about Russian interference in US politics, Trump said he thinks that Russia meddled but that “China meddled too.”

“You are diverting the whole Russia thing,” Stahl said in the back-and-forth over Russia.

“I’m not doing anything,” Trump said.

Trump feels nothing about having mocked Christine Blasey Ford

The president openly mocked Christine Blasey Ford, who accused now-Supreme Court Justice Brett Kavanaugh of sexually assaulting her while they were in high school, at a rally just days after she testified before the Senate Judiciary Committee about her allegations, which Kavanaugh denies. The president doesn’t have any remorse about it, because he thinks his actions, as appalling as they might have been, worth it for the win.

Here’s part of the exchange:

Stahl: Do you think you treated her with respect?

Stahl: But you seem to be saying that she lied.

Trump: You know what? I’m not going to get into it because we won. It doesn’t matter. We won.

President Trump on his treatment of Justice Kavanaugh accuser Dr. Christine Blasey Ford during a speech in Mississippi: “Had I not made that speech, we would not have won.” pic.twitter.com/We2r9Zi9Iz

Jim Mattis might want to start dusting off his résumé

It’s been reported that the president is souring on Defense Secretary James Mattis, and Sunday’s 60 Minutes interview doesn’t do much to dispute that.

Trump told Stahl that he believes he has a “great” Cabinet but that there are people he’s “not happy” with. He wouldn’t specify who, but when Stahl asked about Mattis, it was clear things aren’t exactly peachy.

“He hasn’t told me that [he’s leaving]. I have a very good relationship with him. It could be that he is,” Trump said. “I think he’s sort of a Democrat, if you want to know the truth.”

He added that “everybody leaves” at some point.

It’s not just Mattis whose job might be in jeopardy — there’s Attorney General Jeff Sessions, who Trump has publicly expressed disappointment with, too. Trump said “you can’t assume” that Sessions will be out soon, but “we’ll see what happens come midterms.”