5 primary races to watch in Iowa 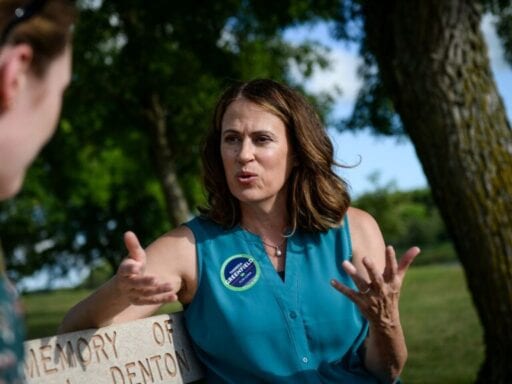 Embattled Rep. Steve King is fighting for his political life in the state’s Fourth District.

Almost all of Iowa’s congressional delegation is contested this fall — and June 2’s primary is set to play a major role in shaping what those races look like.

Statewide, the race to watch is the Democratic Senate primary, which will determine the candidate who’ll go up against Sen. Joni Ernst, the state’s Republican incumbent and one of Democrats’ top targets. The seat, which Cook Political Report currently rates as Lean Republican, will be among the most closely watched this fall.

The state’s four House seats are also slated to be competitive in November: Three are currently held by Democrats and the fourth is held by embattled Republican Steve King, who has been censured by his colleagues for making a series of racist comments. All four races will have crowded Republican primaries on Tuesday, while Democrats only have one candidate running in each.

Democrats are eager to retake Ernst’s seat — which they last held in 2014 — in November, and a field of four will duke it out for the chance on Tuesday.

Spending for the Senate race has already ramped up during the primary, a preview of a general election race expected to be one of the most expensive in the country.

“Democrats would argue that the spending will help introduce her [Greenfield] positively to Iowa voters — beyond helping her in the primary — and that such positive building-up will insulate her from Republican attacks later,” says Kyle Kondik, the managing editor of Sabato’s Crystal Ball at the University of Virginia. “Some operatives on both sides believe that [Arizona’s] Kyrsten Sinema benefited from this dynamic in 2018.”

It’s a strategy Democrats hope will pay off in the fall, as they look to Iowa as one of the states that could help them secure a potential Senate majority.

Rep. Abby Finkenauer was one of the Democrats who flipped a Republican seat during the blue wave in 2018, and this cycle, two Republicans are seeking to reclaim it. Finkenauer is running unopposed on the Democratic side, while small-business owner Thomas Hansen and state Rep. Ashley Hinson are going head-to-head in the Republican primary.

Hinson is viewed as the favorite in the northeastern Iowa district: She’s served as a state lawmaker for the past few years and was previously a reporter for the regional television station KCRG-TV. Hinson has a long slate of endorsements and extensive fundraising support, picking up the backing of President Donald Trump and multiple PACs including Republican Rep. Elise Stefanik’s E-PAC. She’s one of a record number of Republican women who’ve filed to run for the House this year. Cook Political Report rates the seat a Democratic Toss-Up.

Democratic Rep. Dave Loebsack is leaving the House, prompting multiple Republicans to enter the fray for his southeastern Iowa seat. State Sen. Rita Hart is the only Democrat in the race, while five Republican candidates will be on the ballot during this week’s primary.

Of the five candidates, two are viewed as the frontrunners. They are business leader and former Illinois Rep. Bobby Schilling and state senator and veteran Mariannette Miller-Meeks. Miller-Meeks has a significant fundraising advantage, according to the Quad-City Times, while both have accrued endorsements from various lawmakers. Miller-Meeks has picked up Ernst’s backing, and Schilling has that of Rep. Jim Jordan. This seat could be contentious during the general election as well: Cook Political Report rates it a Democratic Toss-Up.

Iowa’s Third: A former Republican representative is keen to get his seat back from Rep. Cindy Axne

In 2018, Democratic Rep. Cindy Axne unseated Republican Rep. David Young, who’s now trying to reclaim it. Axne is running unopposed in the Democratic primary, and Young is one of two candidates looking to go up against her during the general election.

Young previously served in Congress for two terms, and he’ll be competing with Army veteran Bill Schafer on Tuesday. Schafer has tried to cast himself as the candidate with grassroots support and frame Young as the establishment pick, as he has the Republican party’s backing. Like several of the districts in the state, this one is also deemed a Democratic Toss-Up by Cook.

Republican Rep. Steve King is one of the most controversial members of the House: he’s been stripped of his committee assignments due to racist comments he made earlier this year, when he defended white nationalism.

Now, four other Republicans are fighting to oust him, while J.D. Scholten, a former professional baseball player and paralegal, is slated to be on the ticket for Democrats in November. Given how crowded the field is, King could eke out a victory, though he’s lost some support to current state Sen. Randy Feenstra and trails him in fundraising.

King’s competition will hit him for his history of racist remarks as well as his inability to govern, since his committee assignments have been taken away. The seat is expected to remain in Republican hands this fall: Cook rates it Likely Republican.