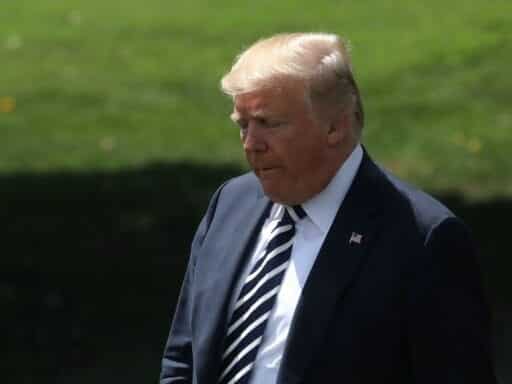 The book excerpts from Fear show Trump is not handling foreign policy all that well.

Those are just some of the surprising details about President Donald Trump in Bob Woodward’s anticipated book Fear. Excerpts have started to leak in multiple outlets, and they show how tumultuous — and potentially dangerous — Trump’s foreign policy has been.

The book comes out next week, which means the following accounts are still incomplete and devoid of full context. Still, the excerpts show how US foreign policy under Trump’s has nearly turned into a full-blown disaster on numerous occasions.

Below are just some of the major foreign policy and national security tidbits from the newly released excerpts of Woodward’s book.

In April 2017, the US launched a cruise missile strike against a Syrian regime airbase — the first intentional US strike on Bashar al-Assad’s forces since the Syrian war began in 2011. The strike was in direct response to a chemical weapon attack on the rebel-held town of Khan Sheikhoun that killed at least 85 civilians.

But Woodward reports that Trump wanted the strikes to be a lot more punitive.

“Let’s fucking kill him! Let’s go in. Let’s kill the fucking lot of them,” Trump told Secretary of Defense Jim Mattis, referring to Assad and his forces. After hanging up with Trump, according to Woodward, the secretary told one of his senior staffers: “We’re not going to do any of that. We’re going to be much more measured.”

Mattis’s more restrained response is what Trump ultimately authorized. But it’s completely possible that without Mattis’s intervention, the US would’ve launched a larger-scale strike to try to kill Assad. That would certainly have angered Assad’s main backer, Russia, and may have led to a broader Washington-Moscow confrontation.

So Trump is apparently fine with assassinating foreign leaders — at least in theory. That’s quite an insight into how Trump wants to use his military.

Perhaps that should be expected: In 2011, Trump said that former President Barack Obama should kill then-Libyan leader Muammar Qaddafi.

“Now we should go in, we should stop this guy, which would be very easy and very quick,” Trump said in a video blog. “We should do on a humanitarian basis, immediately go into Libya, knock this guy out … and save the lives.”

In the fall of 2017, Trump reportedly told top White House staffer Rob Porter about how he wanted to handle ongoing nuclear tensions with North Korea.

“This is all about leader versus leader. Man versus man. Me versus Kim,” Trump said.

One can kind of see Trump’s point here. The only person who really matters in North Korea is Kim, as he has near-complete control over his country. So if Trump wants Pyongyang to give up its nuclear weapons, he has to persuade Kim.

But the crux of the North Korea problem isn’t a relationship between two leaders. Rather, it’s how both countries can move beyond their impasse. Basically, Pyongyang wants the US to stop defending South Korea — like including it under its so-called nuclear umbrella — and Washington wants Pyongyang to dismantle its entire nuclear program. No amount of good feelings between the leaders can solve that problem.

In fact, that impasse is what’s led to a breakdown in US-North Korea talks since the Singapore summit in June. Two weeks ago, Trump canceled Secretary of State Mike Pompeo’s trip to North Korea over the disagreement.

One thing, however, is clear: The president still wants a friendly relationship with the North Korean dictator.

…Secretary Pompeo looks forward to going to North Korea in the near future, most likely after our Trading relationship with China is resolved. In the meantime I would like to send my warmest regards and respect to Chairman Kim. I look forward to seeing him soon!

The greatest example of that second component is the US-Korea Free Trade Agreement, under which both countries trade around $145 billion in goods and services a year mostly tariff-free. That deal helps the US keep its ally’s economy thriving, and maintains a key friend in the region — all while stimulating the US economy back home.

Yet it appears Trump was very close to removing the US from that agreement. According to Woodward, Trump had a letter on his desk that — had he signed it — would’ve withdrawn the US from the free-trade deal. Trump has previously expressed a desire to leave that accord.

Gary Cohn, then Trump’s top economic adviser, was so fearful Trump might sign it that he removed the letter from the president desk.

“I stole it off his desk,” Cohn told someone close to him. “I wouldn’t let him see it. He’s never going to see that document. Got to protect the country.”

Stealing documents, Woodward notes, is something Trump staffers repeatedly do to keep the president from harming US national security. Woodward described the tactic as “no less than an administrative coup d’état.”

There may have been serious repercussions had Trump signed the letter.

For one, the US would’ve lost a staunch ally and an important partner in talks with North Korea. Second, Seoul may have kicked out America’s roughly 28,500 troops from the country. And third, it likely may have hurt a secret US program to detect a North Korean missile launch within seven seconds.

Trump could still decide to withdraw from the deal in the future. If that’s the case, his staffers will surely have to give him a letter to sign.

It seems at least one world leader is paying close attention to the Robert Mueller probe.

The Trump administration worked with Egypt to release Aya Hijazi, an Egyptian-American aid worker, from captivity in April 2017. During a call with Trump to discuss her release, Egyptian President Abdel Fattah al-Sisi made a startling comment.

“Donald, I’m worried about this investigation. Are you going to be around?” al-Sisi asked, according to Woodward. Trump told his then-top personal lawyer that his chat with Sisi was “like a kick in the nuts.”

Ultimately, Trump secured Hijazi’s release. But this episode brings up an important question: How many other leaders worry that Trump may not last in his position because of the probe? It’s possible US relations with other countries are somewhat on pause as leaders wait to find out the president’s fate.

If that’s the case, it’s a troubling position for the world’s most powerful person to be in.

5) Mattis thinks Trump acts like “a fifth- or sixth-grader”

Mattis almost never criticizes the president in public. In private, though, it seems to be a different story.

Woodward recounts that after a testy meeting on South Korea — in which Trump questioned why the US backs it financially and militarily — Mattis told associates that the president acted and understood things like “a fifth- or sixth-grader.”

“Secretaries of defense don’t always get to choose the president they work for,” Mattis reportedly joked to friends in another instance.

The Secretary denied making these statements. “The contemptuous words about the President attributed to me in Woodward’s book were never uttered by me or in my presence,” Mattis said in a Tuesday statement.

The secretary has so far avoided Trump’s anger, in part because he keeps out of the spotlight by not making comments like that. But Woodward’s book threatens to put Mattis in Trump’s crosshairs — and therefore possibly out of the Pentagon soon.

Sen. Kamala Harris joins the growing list of lawmakers endorsing Joe Biden
State Department bans NPR reporter from traveling with Pompeo after testy interview
The Trump administration already made huge refugee cuts. It’s making more.
Trump judge lashes out at a transgender litigant in a surprisingly cruel opinion
The 4 most important stories of the week, explained
John Delaney has a plan for universal health care — but don’t call it “Medicare-for-all”