5 takeaways from House Democrats’ resolution on the impeachment inquiry 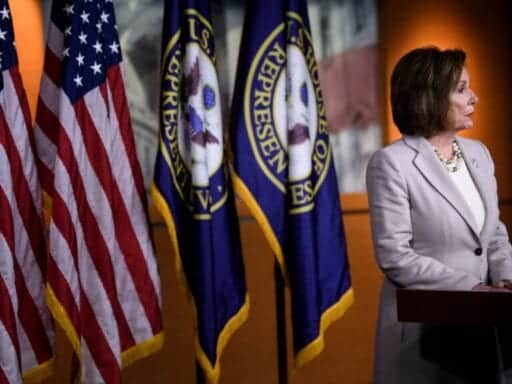 The measure will put both Democrats and Republicans on the record about the investigation.

The House will hold a vote on the impeachment inquiry after all, Speaker Nancy Pelosi has announced. Lawmakers this Thursday will vote on a resolution that lays out the procedure behind how the impeachment inquiry will be handled from here on out. Democrats have unveiled the text of the resolution, which details the process that will be used for public hearings and subpoena requests.

Pelosi’s decision to conduct a vote on this resolution marks a turnaround from the speaker’s past resistance to holding a chamber-wide vote on the subject. Previously, Pelosi had shied away from a vote like this because it would force moderate members to go on the record about their stance on impeachment, making them vulnerable to Republican attacks.

In the wake of Republican pushback about the “process” behind the inquiry, however, Pelosi said her members would be voting on a measure that “affirms the ongoing, existing investigation.” It will be the first vote the House has taken on the inquiry since the probe into President Donald Trump officially began in late September.

Public support for an impeachment inquiry has grown in recent weeks as more information has spilled out about a July phone call between Trump and Ukrainian President Volodymyr Zelensky, who Trump pressured to dig up dirt about political rivals.

The resolution outlines five key aspects of these procedures:

You can read the full resolution, here.

There’s a key point the speaker makes clear in her letter: The House did not need members to vote to formally begin an inquiry, a dynamic that was validated by a federal judge last week. The argument advanced by Republicans — and the president — questioning the legitimacy of the impeachment inquiry due to a lack of House vote has “no merit,” she emphasizes.

As Vox’s Ella Nilsen explained, the Constitution only includes a few lines about impeachment, but in them it “gives the House and its leaders wide latitude to decide how to handle it”:

It’s worth noting that this move isn’t House Democrats voting to approve articles of impeachment to send to the Senate for a trial — it isn’t even a vote to draft them. But the resolution — which can pass with a simple majority, or 218 votes — is intended to provide clarity on the procedures that the lower chamber plans to follow as the inquiry continues. Given Democrats’ 233-member majority in the lower chamber, the measure is likely to move forward.

Republican gripes have centered on how depositions with witnesses have been conducted behind closed doors — even though a similar format was used during former President Bill Clinton’s impeachment proceedings. Pelosi’s announcement signals Democrats are getting ready to move to a more public phase.

“This resolution establishes the procedure for hearings that are open to the American people, authorizes the disclosure of deposition transcripts, outlines procedures to transfer evidence to the Judiciary Committee as it considers potential articles of impeachment, and sets forth due process rights for the President and his Counsel,” Pelosi writes.

In this vote, members of the House will be expressing their position on the impeachment inquiry, putting pressure on both moderate Democrats and Republicans. Some developments to watch: whether Democrats unanimously back the resolution and whether any Republicans break with the president and vote in favor of the measure. House Minority Leader Kevin McCarthy is already encouraging his caucus not to:

Today’s backtracking is an admission that this process has been botched from the start.

We will not legitimize the Schiff/Pelosi sham impeachment.

President Pence? President Pelosi? There are nearly a dozen ways the impeachment inquiry could end. Vox’s Laura McGann runs through each of them.

From FDR to Obama: A look back at inaugural traditions
The Supreme Court will hear the biggest guns case in over a decade next week
A Texas judge just blocked Biden’s 100-day pause on deportations
3 of Trump’s signature immigration policies are on the line at the Supreme Court
Trump says “Russia, if you’re listening” was a joke. There’s tape to prove otherwise.
Watchmen’s Laurie Blake — and how the show is rewriting her comic book origins — explained