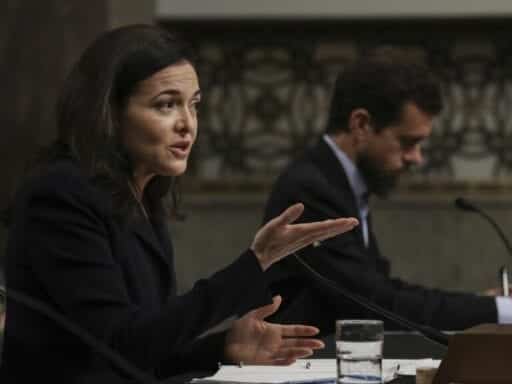 Alex Jones, an empty chair, and an auctioneer.

Lawmakers spent several hours on Wednesday grilling top executives from Facebook and Twitter on Russian misinformation online, whether Twitter is biased in how it monitors online accounts, and a few other topics for good measure.

Facebook COO Sheryl Sandberg and Twitter CEO Jack Dorsey first answered questions about what their sites are doing to prevent Russian and other foreign actors from sowing discord on their platforms during a Senate Intelligence Committee hearing. Later, Dorsey faced down lawmakers during a House Energy and Commerce Committee hearing in which they accused Twitter of showing political bias in how it promotes and monitors accounts.

The marathon day of hearings didn’t yield too many revelations — Facebook and Twitter are apparently working hard to take down fake accounts by foreign operatives, but there’s still a lot to do. Some Republican lawmakers hounded Dorsey with questions about anti-conservative bias on the site; others asked about harassment, bullying, and hate speech.

But more than the substance of the hearings, the day seemed to be defined by drama on the sidelines, including a bizarre confrontation between conspiracy theorist Alex Jones and Sen. Marco Rubio (R-FL).

Here’s a recap of what you might have missed.

Russian interference was the main focus of the first hearing, though lawmakers and tech CEOs didn’t offer many new revelations about attempts to spread false information by Russia or other foreign actors.

Instead, they focused on what social media platforms have done in the past year to help combat foreign interference and fake accounts online — and what’s still missing.

In her opening statement, Sandberg acknowledged that Facebook had been slow to act, but was now investing heavily in people and technology, including artificial intelligence, to help “find bad content and locate bad actors.” She cited shutting down accounts, increasing transparency for ads, requiring documentation for political ad buys, and collaborating with partners like law enforcement to root out problems.

We‘ve made significant progress recently on tactical solutions like identification of many forms of manipulation intending to artificially amplify information, more transparency around who buys ads and how they are targeted, and challenging suspicious logins and account creation.

Lawmakers acknowledged their efforts, but said more had to be done. Among the areas that came up: protecting users’ privacy; alerting users so they know they’re interacting with bots; and alerting users that they’ve interacted with inauthentic accounts.

“This problem is not going away,” Sen. Richard Burr (R-NC), the chair of the Senate Intelligence Committee, said. “I’m not even sure it’s trending in the right direction.”

Hey, Google! Why didn’t you show up?

An empty chair played a starring role at the Senate hearing.

Google’s top executives declined an invitation to appear alongside Twitter and Facebook, and lawmakers made their ire known by leaving an empty chair and placard to represent the tech company.

“I’m deeply disappointed that Google, one of the most influential digital platforms in the world, chose not to send its own top corporate leadership to engage this committee,” Sen. Mark Warner (D-VA) said during the hearing.

The tech company had reportedly offered to send its senior vice president of global affairs, Kent Walker, but Burr and Warner weren’t satisfied with that substitution, leaving the empty chair instead.

Google chose to release a statement online instead of attending the hearing, saying it’s “committed to working with Congress on these issues.”

Come for the policy discussions about foreign interference, stay for the bizarre confrontation between Sen. Marco Rubio (R-FL) and Infowars’s Alex Jones.

Jones and other conspiracy theorists and alt-right figures who have been banned for violating rules on various social media platforms showed up at the hearings, in an apparent protest of what they see as censorship.

Jones accosted Rubio as he was answering questions about foreign interference and misinformation on social media, interrupting the senator and shouting at him. Rubio tried to ignore Jones’s comments, until Jones tapped Rubio on the shoulder, as Vox’s Emily Stewart detailed:

“Don’t touch me again, man. I’m asking you not to touch me,” Rubio told Jones.

Well, sure, I just patted you nicely,” Jones said.

Jones talked over him, saying he wanted him to be arrested, and Rubio said he didn’t know who Jones was.

Jones, surprised, looked at reporters and said, “Oh, he’ll beat me up.” He told Rubio he wasn’t “going to silence me” and called him “a little gangster thug.”

Wow, this video. Alex JONES calls RUBIO a “frat boy” and touches Rubio on the shoulder. Rubio tells Jones not to touch him and that he won’t be arrested because I’ll “take care of you myself.”https://t.co/AGRMrDBMGa

Rubio later claimed that he thought he knew of Jones, he didn’t know what he looked like until their encounter this afternoon.

The incident served to highlight the strange Republican coalition that has developed under Trump. As Vox’s Jane Coaston has written, while some Republicans are sympathetic to conservative claims that they face bias on social media platforms, “most mainstream Republicans … prefer their support to be at least one step removed from characters like Jones … all of whom have made a living off blatant racism and accusing mass shooting survivors of being paid actors.”

Speaking of political bias — that was an intense House hearing

The House Committee on Energy and Commerce hearing on Wednesday afternoon devolved into partisan finger-pointing — a markedly different tone from the largely bipartisan and cordial Senate hearing this morning.

Republicans asked questions about whether the social media platforms’ attempts to monitor content on the site was unfairly biased against conservatives, an issue that Trump has complained about in recent weeks.

Rep. Joe Barton (R-TX) told Dorsey that: “We wouldn’t be having this discussion if there wasn’t a general agreement that your company had discriminated against conservatives.”

Democrats, meanwhile, criticized Republicans for wasting a hearing on a fake controversy, rather than tackling the actual problems with social media, from foreign influence to bullying and trolling. Rep. Frank Pallone (D-NJ), the committee’s ranking member, complained in his opening statement about the purpose of the hearing.

“Over the past few weeks, President Trump and many Republicans have peddled conspiracy theories about Twitter and other social media platforms to whip up their base and fundraise,” Pallone said. “I fear the Republicans are using this hearing for those purposes instead of addressing the serious issues raised by social media platforms that affect American’s everyday lives.”

Another House member, Rep. John Sarbanes (D-MD) read a list of White House controversies that Congress should be investigating instead of grilling Twitter about alleged anti-conservative bias.

Dorsey, throughout the hearing and in his opening statement, said Twitter is working and studying accidental bias in its algorithms to ensure impartiality, and trying to correct any unintentional bias.

Our technology was using a decision making criteria that considers the behavior of people following these accounts. We decided that wasn’t fair, and corrected. We‘ll always improve our technology and algorithms to drive healthier usage, and measure the impartiality of outcomes.

In one of the most bizarre moments of the day, Laura Loomer, an alt-right activist, interrupted the House hearing to protest perceived censorship by Twitter. But rather than drown out the proceedings, she got interrupted — by a Congress member doing an auctioneer bit.

House members called for order, and in the confusion that followed, Rep. Billy Long (R-MO) decided to do a quick, comedic turn as an auctioneer. It’s something he’s done before, but here’s the video from Wednesday’s hearing:

The White House’s explanation for a tear gas attack on peaceful protesters doesn’t add up
Watch: Nobel Prize-winning efforts show stars orbiting the black hole at the center of our galaxy
The way forward for MeToo, according to founder Tarana Burke
Midterms 2018: Ayanna Pressley runs unopposed for Massachusetts’s 7th District
The protests over Nia Wilson’s murder, explained
Brazil’s Jair Bolsonaro gets coronavirus after months of downplaying the pandemic