5 winners and 3 losers from primaries in Wisconsin, Minnesota, Vermont, and Connecticut 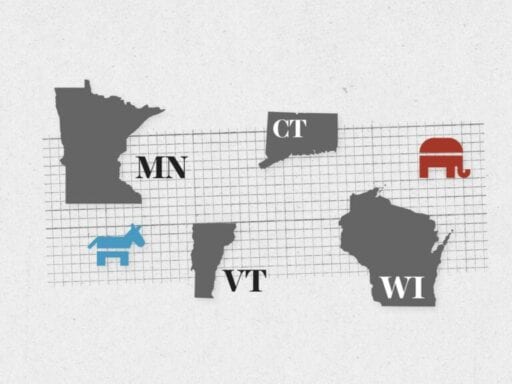 Ned Lamont makes a comeback! T-Paw does not!

In an evening filled with history, a trans woman secured a major party gubernatorial nomination for the first time ever, the country is poised to send its first Muslim women to Congress, a major political party decided to run a guy with a mustache in a tough race, an important figure from the heady days of mid-aughts political blogging made a comeback, and big things happened in Minnesota for the first time since Prince died.

These primaries set up a series of races that often defy national trends: Republicans having a real shot at winning in Connecticut and a near lock on Vermont, while risking major losses in more conservative Midwestern states.

Here’s who won and who lost.

About a week before primary day, Rachel Cohen of the Intercept dropped a scoop indicating that Minnesota Attorney General (and clear frontrunner for the Democratic Party’s gubernatorial nomination) Lori Swanson had illegally relied on her official staff to do campaign work.

It was the kind of situation that appeared to run the risk of dirtying up the nominee in plenty of time for it to cripple her in November while also happening too close to primary day for the impact to sink in with the voters and get them to choose someone else. But that didn’t happen. Instead, Swanson drastically underperformed her poll numbers and finished third. The winner, Rep. Tim Walz, a Democrat who’s been holding down a reddish House seat, is probably the strongest candidate Democrats could field anyway and, in light of the scandal swirling around Swanson, is certainly stronger.

This is still a tough race in November — Minnesota has been trending more conservatively in recent years — but the primary worked out very well for Democrats, and they are now more likely than not to win.

The exact opposite thing happened, meanwhile, in the race for Minnesota attorney general, where Rep. Keith Ellison won handily despite late-breaking domestic abuse allegations that are unverified as of now but certainly could get worse for Ellison and could hurt him even if they don’t.

Furthering the contrast with the situation at the top of the ticket, Ellison is one of the most left-wing members of the House and has spent his career holding down an extremely safe urban district that gives him little obvious appeal to Minnesota swing voters in the rural Iron Range.

A clear exoneration of Ellison would make for a happy ending to the story, but it’s possible this could evolve into an ugly situation.

Christine Hallquist, who won the Democratic Party nomination to serve as governor of Vermont, is a definite underdog against popular incumbent Republican Phil Scott, who swept into office after the collapse of an effort to create a state-level Medicare-for-all plan and has impressed voters with his moderation. But it would be foolish to entirely count out the Democratic nominee in a heavily Democratic state running in a national political environment that’s favorable to Democrats.

What’s more, Hallquist is breaking ground as the first openly transgender person to capture a major party gubernatorial nomination — a huge step forward in a country that just elected its first openly trans state legislator last fall. If she wins, she’ll have a mandate to pursue an aggressive progressive agenda including a $15-an-hour minimum wage, rural co-ops to provide high-speed broadband throughout the state, and, yes, another bite at the single-payer apple.

But win or lose, her campaign will be the highest-profile political exposure for a trans person in American history.

Elsewhere in the Vermont gubernatorial election, 14-year-old Ethan Sonneborn successfully got himself on the ballot despite being too young to vote.

And he got crushed, finishing in a distant fourth place behind environmental activist James Ehlers and Brenda Siegel, the executive director of the Southern Vermont Dance Festival. People really did not want to vote for a teenager. Sonneborn’s campaign platform was mostly standard-issue Democratic fare, but unlike his rivals, he did come out in favor of a carbon emissions tax — an idea most experts tout as a highly efficient way to address an acute global crisis that is also famously unpopular with voters. So in theory, maybe he did so badly because of the carbon tax. But back in the real world, we all know it’s because he was 14.

As a longstanding proponent of letting kids vote, I find this setback for the cause of youth political rights to be somewhat regrettable. It’s hard to avoid the conclusion that Hallquist was a stronger candidate than Sonneborn, but the poor kid even got beat by the Dance Festival lady.

Ned Lamont is back!

Let me explain. Back when George W. Bush was president and long before content optimization strategy ruled the land, we had political blogs and a thing called “the Netroots,” and while Netroots figures had many causes, the highest cause of all was hating Joe Lieberman. Hatred for Lieberman ran so deep that even professional nice guy Ezra Klein once accused him of being “willing to cause the deaths of hundreds of thousands of people in order to settle an old electoral score.” (This was basically accurate.)

The great lost chance to kill off Lieberman’s career in electoral politics came in 2006, when he lost a primary challenge to business leader Ned Lamont.

But then Lieberman, because he’s annoying, refused to endorse the Democratic nominee for Senate, choosing instead to run for reelection as the Connecticut for Lieberman party’s nominee. Republicans, facing an electoral tsunami that year, basically threw in the towel and let Lieberman soak up conservative votes. National Democrats, meanwhile, wanted to plow resources into beating Republicans and largely sat out the race. Lamont lost, Lieberman spent the 2008 cycle campaigning for John McCain, and then he was welcomed back with open arms by the Democratic caucus.

Now somehow, 10 years later, Lamont is back! Connecticut is a solidly liberal state, but its economy has been weak lately and incumbent Gov. Dan Malloy is deeply unpopular. Malloy opted not to seek another term, and the state party really needed a nominee without ties to the incumbent governing regime. A nominee like, well, Ned Lamont, who will now once again get his shot at statewide office.

Of course, given Malloy’s unpopularity, the Republicans also have a shot at just winning the race, and Lamont will have to bank heavily on the national GOP’s unpopularity to give him the W.

It’s been a hard century or so for mustaches in American politics, which, though not exactly unheard of in today’s Congress, are normally limited to politicians taking it easy in safe seats.

Randy Bryce, an ironworker and union organizer in Wisconsin whose early campaign ad went viral back when he was running against Paul Ryan, is bucking that trend by not only running in a tough district with a mustache but making it central to his political identity as @Ironstache on Twitter.

Thank you to everyone who voted today!

And a special thanks to all the #IronStache volunteers and staff who helped to get out the vote. #WI01 pic.twitter.com/OGCguEeROi

Bryce captured the imagination of the populist wing of the Democratic Party early but also gained establishment imprimatur as an official member of the DCCC’s Red to Blue program. That designation was in part more about coalition management than anything else, but it helped Bryce win in what proved to be a meaningfully contested primary against Cathy Myers, a somewhat more conventional figure who has managed to do things like win actual local elections in the past.

Ryan, of course, has since dropped out of contention, and the district is really only borderline winnable. Bryce, meanwhile, despite his appeal to the Extremely Online, actually has some troubles in his past, including a DUI and some failure to pay child support that make him arguably a less-than-optimal candidate. But then there’s the mustache — something a bit new, a bit working-class, and very Midwestern. Something he’s hoping can help reconnect the Democratic Party with the voters of a once solidly blue state that’s become a stronghold of conservatism in recent years.

Minnesota state Rep. Ilhan Omar will likely become one of the first Muslim women elected to Congress after winning a heated Democratic primary in Minnesota’s Fifth Congressional District on Tuesday.

Omar, a 36-year-old Somali refugee who immigrated to the United States as a teenager, beat a packed field of six candidates in the race to fill current Rep. Keith Ellison’s seat. Ellison decided to run for Minnesota attorney general rather than return to Congress; he faced allegations of domestic abuse in the last days of his campaign.

Given the district’s partisan makeup (Cook Political Report rates it D+26), Omar is all but assured of being elected to the House in November. She should be joined by Michigan’s Rashida Tlaib as the first Muslim women elected to Congress. Tlaib won last week’s primary to replace disgraced Rep. John Conyers, who resigned after sexual misconduct allegations, in another safe Democratic district.

Congress currently has only two lawmakers who identify as Muslim — and both of them, including Ellison, are men.

Tim Pawlenty served two forgettable terms as governor of Minnesota before running an extremely lackluster 2012 presidential campaign that featured this amazingly silly video, tried to get on Mitt Romney’s ticket as VP, failed, and then cashed in as head of the Financial Services Roundtable here in DC.

Then earlier this year, he decided to hop back into politics, citing the state Republican Party’s lack of top-tier recruits for the governor’s race and suggesting himself as the salvation the GOP needs. He had the name recognition (being a former two-term governor will do that for you), he had the money (working as a bank lobbyist will do that for you), but he just didn’t have the voters (being kind of lame will do that for you). Pawlenty ended up losing to Jeff Johnson, a former state rep who lost as the GOP nominee for attorney general in 2006 and then lost again as the GOP nominee for governor in 2014.

It’s of course possible that Johnson will do better this time around, but the overall national environment for Republicans is much worse this year than it was four years ago, so nominating a previous loser to take another bite at the apple seems like a bad idea. But that’s just how lame Pawlenty (known affectionately as T-Paw to politics Twitter) seems to be.

E3, the biggest video game event of the year, is canceled because of coronavirus
Pete Buttigieg drops out of the presidential race
All of Robert Mueller’s indictments and plea deals in the Russia investigation so far
The US will revoke visas for Saudi suspects in Jamal Khashoggi’s killing
What’s next for #MeToo? This college might have the answer.
Daniel Pantaleo, the NYPD officer involved in Eric Garner’s death, has been fired