500 migrant kids have been reunited with their parents. Thousands are still caught in the system. 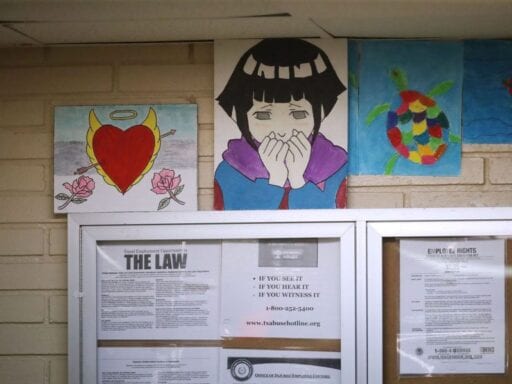 Officials have reportedly established a task force to come up with a plan, but for now, chaos and confusion reign.

About 500 of the 2,300 kids torn away their parents at the border since May have since been reunited with their parents, a Department of Homeland Security Official told NBC News.

If that figure is correct, that still leaves hundreds and hundreds of children separated from their moms or dads days after Donald Trump issued an executive order to end his own practice of splitting up families at the border as a result of its “zero tolerance” policy. The status of these children is still frustratingly opaque. Many remain in shelters, some thousands of miles from the border where they were split apart from their parents. Others are placed with sponsors — with friends or family, or with foster parents.

But reports suggest parents have faced desperation, and dead ends, in trying to locate their children. An organization in Texas told the Washington Post that they are representing 300 parents. They’ve only been able to track down two children. In other instances, parents have been deported, while their children remain behind in the US.

Federal officials are reportedly working on a centralized reunification process. Politico reports that the Department of Health and Human Services created a “children reunification task force” — though it’s been weeks since Trump administration began separating families, and the process was never intended to be permanent. An unnamed administration official told CBS News that all children in the custody of US Customs and Border Protection will be reunited with their families by Friday night, but that’s likely a very small number — the last kids separated from the parents before Trump signed his order.

It’s also not clear the status of these and the other 500 kids reunified with their families — whether they will be, or have already been deported, or remain in detention together. (The Department of Homeland Security and the Department of Health and Human Services have not returned request for comment.)

What is clear is that the process of bringing families back together will be harder than ripping them apart. The chaos is the making of this administration. As a former acting director of ICE told NBC News this week, the government could be creating “thousands of immigrant orphans in the US.”

What we know — and don’t know — about the reunification process

Federal officials have said 500 kids have been reunited with their families, and that all children in the custody of US Customs and Border Protection will be reunited by the end of Friday.

That is likely to be a relatively small number, and won’t account for most of the hundreds of kids who have been separated. Under Trump’s zero tolerance approach, when US Customs and Border apprehended a family at the border, the parent was referred for criminal prosecution. Those children then entered the care of Customs and Border Protection, and effectively became unaccompanied minor children. The law requires border patrol to turn unaccompanied minor children over to the care of the Office of Refugee Resettlement (ORR) within 72 hours. Trump signed his executive order ending family separation on Wednesday afternoon.

The hundreds of separated kids are in ORR custody in shelters, or will be placed with sponsors — a family member or friend who can take them in, or possibly a foster parent. Not all children stay close to the border; they can be sent thousands of miles away from their parents.

After Trump signed his executive order, a spokesman for the Department of Health and Human Services (of which ORR is a part) said that there was no immediate plan to reunite families, and there would “not be a grandfathering of existing cases.” Another spokesperson walked back that statement later Wednesday — saying the agency was “working toward” reuniting families.

Politico reported Friday that the HHS had set up “unaccompanied children reunification task force” to try to figure out how to reunite children. It was convened by the assistant secretary for preparedness and response, a position that normally oversees public health emergencies.

Advocates have already documented plenty of problems with the process

Some parents and kids have been separated for weeks, and have struggled to get in touch with their children — let alone meet them again face to face.

ORR has a hotline for parents to call for information about their children, but some advocates say officials often don’t know where children are being held — or they don’t answer at all.

“No one knows what’s happening with these children,” Laura Lunn, the managing attorney of the detention program at the Rocky Mountain Immigrant Advocacy Network in Denver, Colorado, told the New York Times. “There’s no concept where their child is.”

The immigration cases of parents might also be processed more quickly than children, which may mean some parents are deported while their children stay behind in the US. The New York Times reported on one mother, who was sent back to Guatemala, while her 8-year-old son remained behind in the US. She was able to make contact, but doesn’t know when they’ll be reunited. “All I know is that no one knows what will happen with the children who were separated,” the woman told the Times.

There’s also the problem on the other end — children, especially young ones, may not know all their parents’ information to help case workers track down parents. According to the Washington Post, immigration are establishing “ad hoc” systems — getting kid’s names, passing them along to attorneys and case workers representing undocumented kids, and hoping for a match. Facebook and social media have also become a resource for information.

ORR also had kids in their care before Trump began separating families under its zero tolerance policy. About 2,000 are kids separated from their parents, but another 10,000 —the vast majority — are unaccompanied minor children, who came to the US without parents or guardians. But the Trump administration has, effectively, added to the burden of caring and processing the cases of these kids.

“In this case,” she added. “They have absolutely no agency in determining their unaccompanied status.”

All together, this chaos and bureaucratic disarray means these separations will likely last — if not permanently, though some have warned of that — for weeks or months.

Top Away executives were blindsided by their CEO’s decision to backtrack on stepping down
White House counsel Don McGahn is worried Trump’s setting him up on obstruction — so he’s talking a ...
Federal budget cuts are a blow to evidence-based medical training
Bernie Sanders has an answer to the eternal question, ‘baby how u feelin’
One of Peter Thiel’s venture capital firms has devolved into legal chaos
More than 1,000 Google employees signed a letter demanding the company reduce its carbon emissions