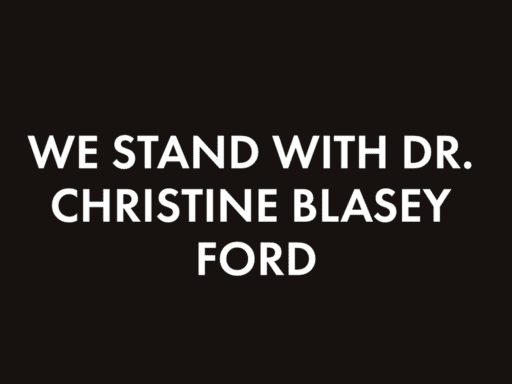 “Ford’s experience is all too consistent with stories we heard.”

Nearly 600 women from Christine Blasey Ford’s high school have signed on to an open letter saying that they support her and believe her account that Supreme Court nominee Brett Kavanaugh sexually assaulted her in high school.

“Dr. Blasey Ford’s experience is all too consistent with stories we heard and lived while attending Holton. Many of us are survivors ourselves,” the letter reads. First circulated by a group of women who do not know Ford and who graduated from Holton-Arms, a private all-girls school in Bethesda, Maryland, in 2005, the letter has 599 signatories from students who attended between 1962 and 2018.

Kate Gold, a class of 2005 Holton-Arms graduate who is an acupuncturist in Maryland, noted that the letter does not refer specifically to Ford’s allegations against Kavanaugh but rather to the experiences of women more generally.

“A connection we all have is that in hearing her story, each and every one of us, resonated immediately, knowing that the situation she described could have happened to any one of us or our friends, and sometimes similar situations did,” Gold told Vox in an email.

She continued: “As far as Dr. Ford’s specific allegations, it is inconsequential/irrelevant to us whether anyone has heard them before, and in no way affects our belief that she is telling the truth. What we are referring to in our letter is the nearly ubiquitous experience of high school girls as they try to navigate coming of age in a society dominated by toxic masculinity.”

The letter reads in part:

We believe Dr. Blasey Ford and are grateful that she came forward to tell her story. It demands a thorough and independent investigation before the Senate can reasonably vote on Brett Kavanaugh’s nomination to a lifetime seat on the nation’s highest court…

Holton’s motto teaches students to “find a way or make one.” We dream of making a world where women are free from harassment, assault and sexual violence. We hold deep gratitude to Dr. Blasey Ford for bravely stepping forward and bringing us closer to that world we all seek.

Ford told the Washington Post that Kavanaugh held her down at a high school party in the 1980s and attempted to force himself on her, covering her mouth to quiet her protests. Her allegations were documented by her therapist in notes from sessions in 2012 and 2013 in which Ford talked about a “rape attempt” and being attacked by students “from an elitist boys’ school.” Kavanaugh denied the allegations, as did another male classmate who Ford said was involved in the incident.

The White House, so far, has stood by Kavanaugh, and Republican senators have continued to praise his character.

Senate Republicans have extended an invitation for both Ford and Kavanaugh to testify to the Senate Judiciary Committee next Monday, in either a public or private setting. Ford has not yet agreed to attend the hearing.

In light of the allegations, which first surfaced anonymously last week, 65 women who knew Kavanaugh in high school testified to his good character in a letter to the Senate Judiciary Committee last Friday.

Those women, who mostly attended all-girls high schools around Kavanaugh’s alma mater Georgetown Prep, wrote: “For the entire time we have known Brett Kavanaugh, he has behaved honorably and treated women with respect. We strongly believe it is important to convey this information to the Committee at this time.”

December 2019 Democratic debate
On Instagram, there’s an influencer for everything. Even pumpkins.
The race for presidential delegates has officially begun. Track them here.
Why it matters that TikTok wants to reveal its algorithms
Alexandria Ocasio-Cortez is floating a 70 percent top tax rate — research backs her up
5 takeaways from House Democrats’ resolution on the impeachment inquiry