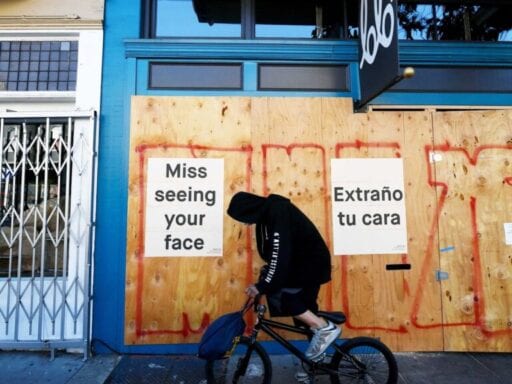 Share
Loading...
A man rides his bike past a sign posted on a boarded up restaurant in San Francisco on April 1. | Josh Edelson/AFP via Getty Images

There are no good numbers.

Last week, US unemployment claims reached 6.6 million. The number of confirmed coronavirus cases in the United States has now exceeded 432,000, and deaths are nearing 15,000 as of April 9. Nearly 2,000 people died in the last 24 hours.

Right now, the United States doesn’t seem to have a clear long-term plan for either the public health or economic catastrophes. The Centers for Disease Control and Prevention (CDC) has issued new guidelines for essential workers so they can return to work after they’ve been exposed to the virus, as long as they’re asymptomatic. It’s a start, but officials are still urging the rest of the public to continue staying at home, and practicing social distancing measures.

The economic fallout of the coronavirus, of course, is not limited to the United States. The International Monetary Fund warned Thursday that the world is likely to see the “worst economic fallout since the Great Depression.” And lower-income countries might feel the effects of the pandemic even more deeply. According to a report from Oxfam, half a billion people could be pushed into poverty worldwide because of the coronavirus — between 6 and 8 percent of the global population.

16.8 million jobless claims in less than a month

The unemployment figures are staggering. This week, another 6.6 million jobless claims were filed, and the previous week’s record (of 6.6 million) was revised up to 6.9 million. Combined with the 3.3 million claims prior to that, Americans have filed a total of 16.8 million unemployment claims in just three weeks. It is another Great Recession, manifesting in a matter of weeks.

Congress and the White House are negotiating another “interim” stimulus package that would include billions for small businesses, and if Democrats get their way, increased support for the food stamps program, hospitals, state and local governments, whose budgets are about to be decimated by both the pandemic response and the economic crisis.

That would go on top of the $2 trillion stimulus package already passed by Congress. But even that might not be enough given the scale of the economic emergency the US is facing.

The rest of the world is in for economic pain, too

On Thursday, Kristalina Georgieva, managing director of the International Monetary Fund (IMF), said the coronavirus pandemic could create the “worst economic fallout since the Great Depression.” The IMF warned that only a “partial recovery” is likely next year, even if countries can get the pandemic under control and businesses and supply chains restart.

But that might still be an optimistic scenario. Either way, the worst economic crisis in a generation will likely not be short-lived.

And as bad as this will be for major economies like the United States, poorer countries are going to be even more vulnerable to these economic shocks. The aid organization Oxfam is estimating that about half a billion people could be pushed into poverty because of the coronavirus pandemic, somewhere between 6 and 8 percent of the world’s population.

The organization is calling on countries to come up a plan to mitigate this disaster, including forgiving developing countries’ debt and offering increased overseas aid packages — an effort that is going to be extraordinarily challenging as major donor countries focus on invest money at home to control the pandemic and provide relief for their own citizens.

The CDC has updated its guidelines for essential workers who might have been exposed to the coronavirus. The new recommendations say that healthcare workers, grocery store employees, food service workers, and other people on the frontlines who have been within six feet of someone who has tested positive for Covid-19 can still return to work if they do not show symptoms of the coronavirus and are not feeling sick.

The CDC continues to recommend that those employees take their temperatures before work, and asks employers to take workers’ temperatures and monitor symptoms before people are allowed to return to work.

The new guidelines also say employees should wear protective gear, such as masks, try to practice social distancing in the workplace as much as possible (like not gathering in large groups in break rooms and cafeterias), and avoid sharing equipment.

Previously, the CDC recommended that anyone exposed to the coronavirus should self-quarantine for 14 days, but these new guidelines are intended to ease pressure on strained workforces.

The US response to the coronavirus has at times been chaotic, with states and the federal government competing for vital supplies, from protective gear to ventilators.

But in recent days, states have been trying to better coordinate — sending supplies to where they’re most needed, or turning down support so it can be directed to the states and hospital systems that are the most strained right now.

California’s Gov. Gavin Newsom, for instance, shipped out 500 ventilators to a bunch of states, including New York, New Jersey, and Illinois. It also included a nice note.

Committed to the health of every Californian. Practicing our duty as Americans to take care of one another. I know other states would do the same. pic.twitter.com/5y5hquISew

Messages on a shipment of ventilators from California.

Thank you to the people of California and Gov. Newsom.

We are so moved by the outpouring of support & solidarity pic.twitter.com/WZYnCUYMf6

Received this message on a shipment of ventilators from Governor @GavinNewsom and the people of California.

Have faith – we will beat this if we all work together. pic.twitter.com/uagRbfrmOW

In Washington, Gov. Jay Inslee returned a basically returned a field hospital to the federal government as he no longer predicts the state’s hospitals will be overwhelmed by coronavirus patients. The field hospital, with 250 beds, had been set up in CenturyLink Field in Seattle (where the Seahawks), but Inslee asked that it be “deployed to another state facing a more significant need.”

States: They can be united sometimes.